Does Trump want to scrap the Iran deal? If so, this is how he does it. 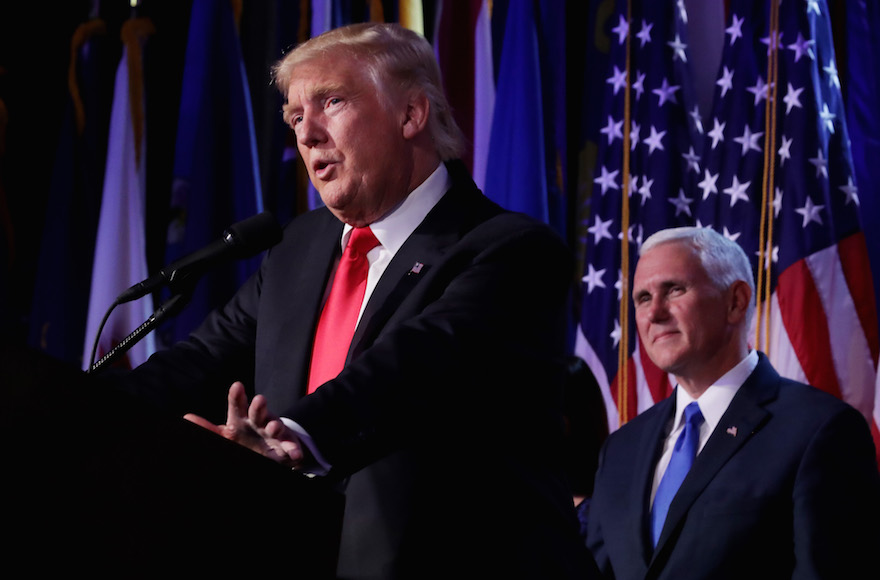 President-elect Donald Trump has an array of options before him when he assumes the presidency on Jan. 21, according to supporters and opponents of the deal. Reached last year between Iran and six major powers led by the United States, the agreement rolled back Iran’s nuclear program in exchange for sanctions relief.

The open question – as are so many questions about Trump’s intentions – is what does the next leader of the free world want to do?

His peregrinations were evident when Trump spoke in March to the American Israel Public Affairs Committee’s policy conference and claimed – literally minutes apart – that he both planned to enforce the deal and to scrap it.

“My No. 1 priority is to dismantle the disastrous deal with Iran,” Trump said at the time. Then a few moments later: “We will enforce it like you’ve never seen a contract enforced before, folks, believe me.”

More recently, Trump appears to be leaning more in the direction of enforcement over scrapping.

His two top advisers on Israel, David Friedman and Jason Greenblatt, released in the last days of the campaign an Israel position paper with provisions meant to lighten the collective heart of the right-wing pro-Israel community – on Jerusalem, Palestinian statehood and settlements. But it was notably circumspect on the Iran deal.

“The U.S. must counteract Iran’s ongoing violations of the Joint Comprehensive Plan of Action regarding Iran’s quest for nuclear weapons and their noncompliance with past and present sanctions, as well as the agreements they signed, and implement tough, new sanctions when needed to protect the world and Iran’s neighbors from its continuing nuclear and non-nuclear threats,” said the position paper from the advisers, two longtime lawyers for Trump.

That reluctance to directly confront Iran — “counteract,” not cancel; “when needed,” as opposed to “right now” — could stem from Trump’s professed warmth toward Russia, which is allied with Iran in its bid to crush rebels in Syria, or a realistic desire to keep his options open.

Here are some of the president-elect’s options on Iran:

The deal essentially is done. Sanctions are lifted, Iran has rolled back its nuclear program. Trump never took much advice during his campaign; he may be less inclined to do so as commander-in-chief. If he doesn’t want a headache, this is one way to go.

Drawbacks: A number of his formal rivals for the Republican presidential nomination are back in their Senate seats, including Ted Cruz of Texas and Marco Rubio of Florida. They hate the deal, they want to be president in 2021 and they’re itching to distinguish themselves from Trump. If they can do it from the right, that’s just the cherry on top. Trump’s silence on Iran would hand them a huge opening for political disruption.

Declare it dead, move on

Does Trump want to shut up Rubio and Cruz? Just declare the deal dead and do nothing. He ran a campaign successfully navigating the tensions between contradictory declarations and actions – why shouldn’t he get away with the same as president?

Drawbacks: The Iranians can point to a declaration of intent to withdraw in order to drop out of the program themselves and then start enriching uranium to weapons-grade levels.

“The Iranians might present themselves as a victim and begin to start restoring their centrifuges,” said Dennis Ross, a former top Iran adviser to President Barack Obama, speaking Thursday at a session on Trump’s possible foreign policy charges at the Washington Institute for Near East Policy, where Ross is now a fellow.

Trump has a number of mechanisms at his disposal that would immediately pull the United States out of the deal. All of them involve restoring an array of sanctions that targeted third parties that deal with Iran. (Direct dealings with Iran, with several exceptions, are still banned for U.S. entities.)

He could simply stop waiving the sanctions already in place according to existing law. Trump could, as President Bill Clinton did in 1995 not long after pro-Israel lobbying shifted to focusing on Iran’s nuclear program, issue an executive order advancing new sanctions. Or he could invoke the International Emergency Economic Powers Act of 1977, which gives the president broad sanctioning power.

Drawbacks: Any pullback from the Iran deal will raise the question of who is at fault for its collapse. The more proactive the United States is in killing the deal, the likelier that the international partners whose sanctions brought Iran to the table will blame the U.S. and continue trading with Iran, threats be damned.

Moreover, Trump may not have the ability to waive existing sanctions — the most passive option described above. That’s because the Iran Sanctions Act, which authorizes the sanctions, is set to lapse on Dec. 31. Congress broadly agreed that it needs to be reenacted, but there is precious little time to do so. Moreover, Democrats want a clean reenactment of the original law, no additions, while Republicans want to insert language making it harder for any president to waive the bill’s provisions. They have yet to settle on a compromise. Without renewal, the president would have to use executive action to impose penalties on Iran.

Worried that the world will turn away from the United States should it pull out? Then make it clear that the Iranians are at fault, say conservatives who oppose the deal.

“He has to start first enforcing it, second doing a bunch of stuff that’s allowed that the [Obama administration] hasn’t been doing,” said Omri Ceren of The Israel Project. “In other words, taking the deal seriously.”

Ceren accuses Obama of ignoring violations by Iran and Secretary of State John Kerry of too eagerly seeking to make clear to third parties still inhibited by existing American sanctions that it was OK to deal with Iran. (The Obama administration feared that if Iran’s economy did not benefit from the deal, hardliners there would persuade the regime to scrap it.)

“All that needs to happen for the deal to fall apart is for the Trump White House to do what the Obama administration has refused to do — enforce its provisions,” wrote Lee Smith, advancing a similar argument to Ceren’s in The Weekly Standard.

Drawbacks: Selling the notion to America’s partners that Iran is in violation might be hard. Case in point: Smith noted that the International Atomic Energy Agency, the U.N. nuclear watchdog, had reported recently that Iran was exceeding its allowed limits for the heavy water used to make weapons-grade plutonium.

However, what the IAEA reported, according to The Associated Press, which obtained the agency’s internal document, was that Iran had exceeded its allotment “only slightly” and would resolve the issue by exporting the overage and then some. To an American partner, Iran’s actions could, described in those terms, look like it was going out of its way to make up for a mistake.

Let Congress do it

If Congress fails to reauthorize Iran sanctions before it concludes its business, there are any number of Republican senators ready to write new ones. That way, Trump doesn’t get blamed for walking away from the deal.

Drawbacks: Democrats will likely filibuster any new legislation. An array of groups that backed the deal, including J Street, the liberal Middle East policy group, has pledged to hold the party’s feet to the fire.

“There will be fights, and these will be fights J Street and other supporters of the deal will engage in with everything we’ve got,” said Dylan Williams, J Street’s vice president of government affairs.

And perhaps, from Trump’s perspective, that’s not a drawback: He satisfies hard-liners by encouraging them to come up with the toughest anti-deal legislation possible – and then watches it wither on the vine.