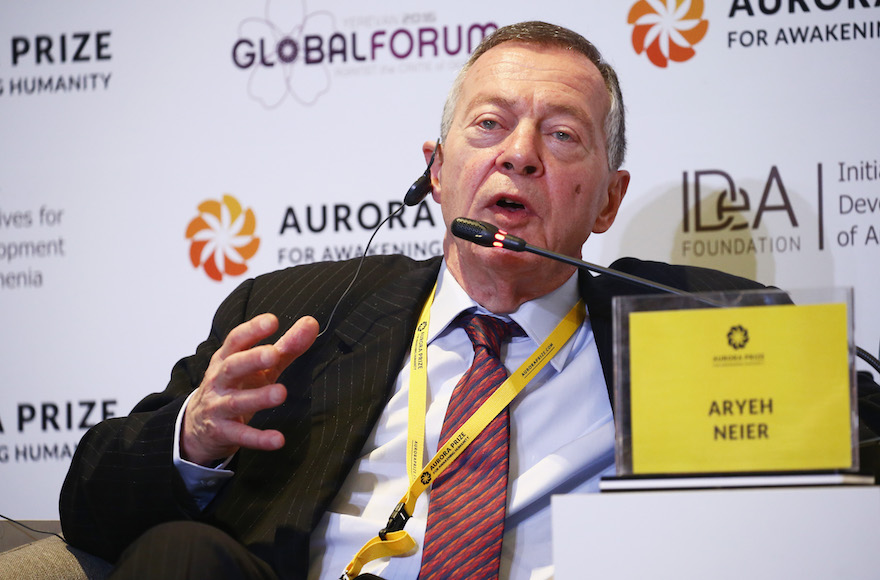 Aryeh Neier at the Aurora Dialogues, a series of discussions between leading humanitarians at the Matenadaran in Yerevan, Armenia, April 24, 2016. (Andreas Rentz/Getty Images for 100 Lives)
Advertisement

THE HAGUE, Netherlands (JTA) — A founder of Human Rights Watch warned that Donald Trump’s election as U.S. president is encouraging anti-Semitism in Europe.

Aryeh Neier, an American Jew who was born in Nazi Germany, addressed the issue on Sunday at a talk about philanthropy and anti-Semitism during an event organized by the Dutch Jewish Humanitarian Fund, or JHF, in the Hague.

“The Trump phenomenon and the phenomenon of xenophobic forces in this part of Europe, some of whom may go further politically than they have gone so far, are likely to contribute” to anti-Semitism, said Neier, 79, the president emeritus of the Open Society Foundations.

Trump, a Republican who defeated Democratic candidate Hillary Clinton in the Nov. 8 election, fought allegations during the campaign of encouraging racism and xenophobia. He has called Mexicans rapists and drug dealers, as well as for a ban on entry by Muslims into the United States.

His victory has been celebrated by European far-right groups, including Marine Le Pen of France’s National Front party, who wrote that Trump’s election set the American people “free.” Geert Wilders, a Dutch anti-Islam campaigner, called the Trump victory a “revolution” to be repeated in his own homeland.

Neier said the victory will “provide very specific encouragement to those who want to demonstrate xenophobia” because “the United States, which has portrayed itself as a leader in efforts to protect human rights, has elected somebody like Trump.”

During the talk, Neier also fielded a question on allegations that Human Rights Watch and groups funded by the American-Hungarian Jewish billionaire George Soros — who also funds the Open Society Foundations – contribute to rising anti-Semitism in Western Europe by singling out Israel for criticism or by supporting its demonization.

Not addressing those accusations specifically, Neier said he opposes rhetoric questioning Israel’s right to exist but stressed all governments should be subjected to “criticism on their policies.”

In 2009, another founder of Human Rights Watch, Robert Bernstein, accused the group of “helping those who wish to turn Israel into a pariah state,” while the “brutal, closed and autocratic” societies of the Arab world were “being ignored.”

The New York-born chief rabbi of Ukraine, Rabbi Yaakov Dov Bleich, said at the JHF event that he did not think Trump’s election would embolden anti-Semites in Ukraine.

“I don’t think it’ll have an effect on anti-Semitism in Ukraine,” he said of Trump’s election, which he said was perceived in Ukraine is having effect on everyday life in that country.

JHF, which the Dutch Jewish community established with Holocaust restitution money, provides hundreds of thousands of euros in funding annually for Eastern and Central European Jews.