Serving up shalom at a post-election Thanksgiving 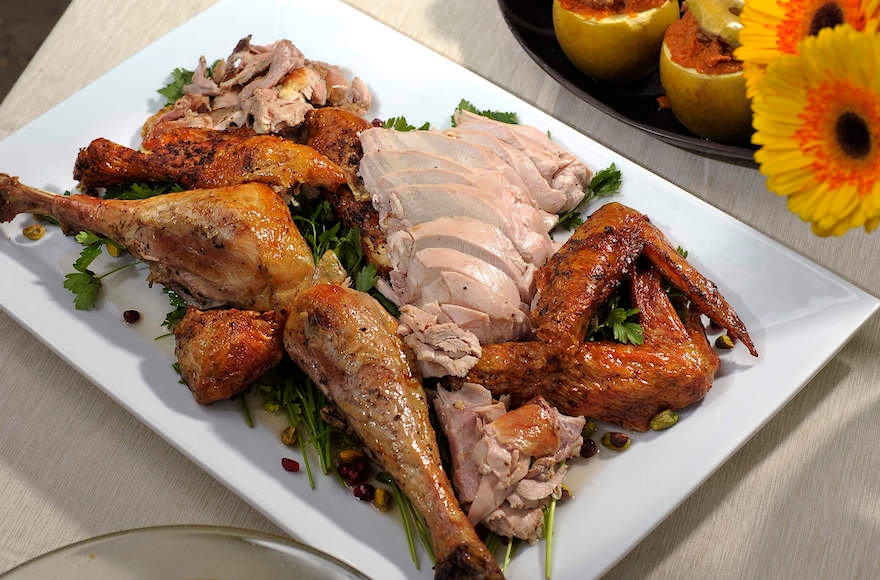 LOS ANGELES (JTA) — It was just a few weeks ago, on the night of Nov. 8, that my family had all anxiously exchanged text messages as we watched the election results trickle in. State by state, my Hillary-loving family saw our hopes slipping away — and now, too soon, we are going to have to gather around the dining room table to celebrate Thanksgiving.

Here’s the problem: We’re not much in the mood to give thanks.

In a shocking upending of our dreams and expectations, our candidate had lost. We felt that the progressive, multicultural, multiracial and multilingual environment in which we lived was threatened. Since then, for my family members and me — not to mention liberals across the land — a kind of mourning had set in for a potential future lost.

With a tableful of liberal Jews coming over for Thanksgiving, what could we do to lift everyone’s spirits?

For Thanksgiving, should we serve hard-boiled eggs, like at a house of mourning? It certainly feels like I’m living in one. The loss wasn’t nearly as life-shaking as when my parents had died, but as on Tisha b’Av — when we chant a dirge called Eicha, or Lamentations, about the fall of Jerusalem —  I had seen the fall of the ideas in which I dwelled. I felt like singing a sad song.

A post-election Pew survey estimated that about 71 percent of the Jewish voters were with Hillary and 24 percent with Trump. That means there are probably a lot of Jewish families out there like mine — meaning that since that fateful Tuesday, we’ve been living in an emotional state of blue not shown on any electoral map.

Families in which everyone voted for Trump won’t have a problem this year celebrating America’s bounty. But if your family is like mine, or is divided between the candidates, short of sprinkling marijuana into the stuffing — hey, now it’s legal in my state of California — how do you get the family in a more hopeful mood, or at least a passably reconcilable one?

For help, I put in an emergency call to an old friend, Rabbi Anne Brener, a psychotherapist and faculty member at the Academy of Jewish Religion, California, as well as the author of “Mourning & Mitzvah.” I knew that through her writings and workshops, she had become a spiritual leader who explored how to teach people to help themselves through periods of grief and mourning.

One of her thoughts on Thanksgiving put my hopes in the freezer, along with the cranberries.

“One possibility is that it could just be awful,” Brener said.

But then: “The other is that it there could be something salvific in it,” she said, giving my expectations a chance to thaw.

“With the vulnerability that people are feeling, I think there’s an opportunity to really connect in a deeper way,” the rabbi said. Releasing a few percentage points from my election-induced anxiety, Brener suggested that people could use the Thanksgiving gathering as an opportunity to “really come together to appreciate what’s really fine about the unit of the family.”

“It’s an opportunity to get back to what Thanksgiving is about,” she said, adding that it isn’t just the day before Black Friday.

The key, Brener explained, is that we celebrate Thanksgiving “in a setting where one can feel loved, cared for and protected,” and “to name the things that bring a family together.”

Having these “nehamot,” — places of community and caring — “is going to save us,” she said.

“Thanksgiving is actually a perfect antidote because it really does give us a chance to be together and to be vulnerable together,” she said.

Responding to both my own feeling of loss — along with the loss of so many people around us — Brener counseled that “there are losses that don’t follow into a category of mourning but have to be treated just like mourning.”

“In the Temple there was a special gate that opened up into the mourner’s path,” she said of an ancient Jewish place where mourners of all kinds sought solace.

The people who walked this path “were not just people who had a death in their family,” she explained, but “people who were dealing with all kinds of things, including changes in community, financial changes and illnesses.”

In connecting to Jews who lived thousands of years ago, I felt some solace. While their losses were of a different nature, they probably weren’t feeling that much different than I was.

But what about Thanksgiving tables that are divided between mourners and those ready to shout “L’chaim!” and raise a glass?

Still, if this describes your family — some are experiencing pain and others not — she suggested that we seek the opportunity to build compassion. That’s something I realized was a valuable exercise whether a family’s political views are united or divided.

Specifically, Brener suggested a ritual, modeled after the Native American tradition of a talking stick, in which everyone is allowed to speak — “without being interrupted, comforted, or told they’re wrong” — but only if he or she is holding the stick.

“Everybody has to listen, nobody can fix it for anybody,” she urged. “Nobody can confront anybody.”

No interrupting? How would that work in any Jewish household, including mine? Brener insisted it was possible. She suggested we use a yad — a Torah pointer, whose end is in the form of a hand with an outstretched finger — rather than a stick to help turn the ritual into “something sacred.”

The image was a pleasant one. But would this create peace at my Thanksgiving table?

“Shalom is a word that also means ‘balance’ and ‘inclusivity,’ and taking into account everybody who is present,” the rabbi said. So if families are seeking some shalom on Thanksgiving, she explained, then the ritual is an opportunity to express hurt, as well as gratitude that there’s a place where they can be heard.

Brener was right, I realized. Even in a loving yet opinionated, pro-Hillary family like mine, such a ritual may help us find meaning in our loss and help pave a path for us to move forward.

After she and I said our goodbyes and I hung up the phone, I found a yad that one of my sons had been given as a bar mitzvah gift 14 years ago. Raising the yad, I imagined it lifting my family’s post-election gloom. With this new tradition in my pocket, I hope it will allow our Thanksgiving table — and yours — to become a place of shalom.