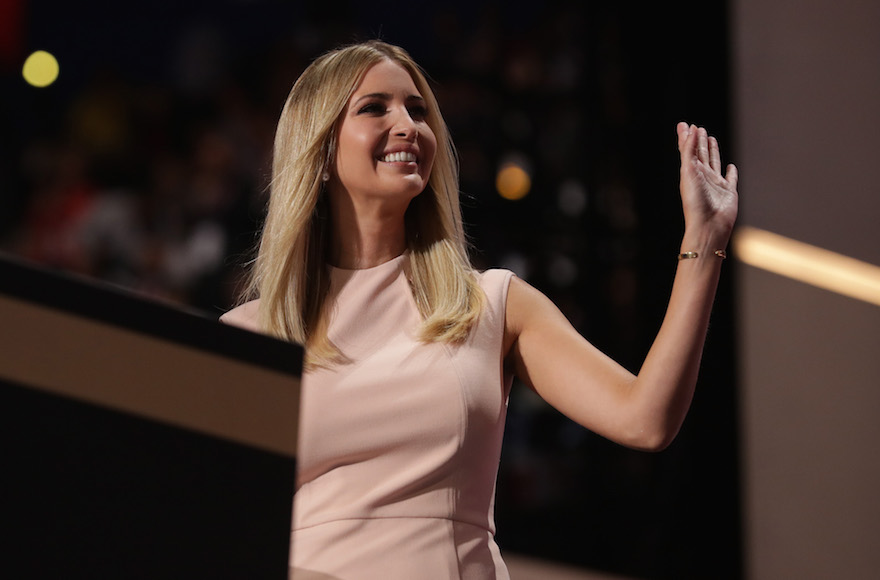 Ivanka Trump waving to the crowd as she walks on stage to deliver a speech at the Republican National Convention at the Quicken Loans Arena in Cleveland, July 21, 2016. (Chip Somodevilla/Getty Images)
Advertisement

(JTA) — Ivanka Trump, daughter of the president-elect and an adviser to him, tops the Forward 50, the Daily Forward’s annual list of 50 Jews who have impacted American life.

Joining Trump among the top 5 of The Forward 50 list released Tuesday are Bob Dylan, the iconic singer-songwriter who recently won the Nobel Prize for Literature; Theo Epstein, president of baseball operations for the World Series champion Chicago Cubs; Julia Ioffe, a Jewish journalist targeted with anti-Semitic posts on Twitter apparently by supporters of Donald Trump, and Daveed Diggs, a rapper and “Hamilton” actor.

The list, subtitled “A Year of Curses and Many Blessings,”  covers categories including business, community, culture, food, law, media, politics, religion and sports.

The Forward wrote of Ivanka Trump, who converted to Judaism before marrying husband Jared Kushner, that she “carried none of the baggage of the Trump family.”

“Her style of Trump was less gold leaf and loud ties; more pastels and pencil skirts. While her father was the butt of two decades of jokes among New York City’s elite, Ivanka was on the inside, a buddy to Chelsea Clinton and Wendi Deng … All of which made it hard to believe that Ivanka would stick by her father as his 2016 presidential campaign chose a path of racism, sexism, Islamophobia and anti-Semitism.”

Among the 21 women on the list are Aly Raisman, the gold-medal winning U.S. Olympic gymnast, and Sarah Hurwitz, speechwriter for first lady Michelle Obama. Other selections include hip-hop star Lil Dicky (aka David Burd) and Shmuly Yanklowitz, an Orthodox rabbi and fighter for human rights.

The Forward’s editor, Jane Eisner, acknowledged that the list “went to press hours after Trump’s stunning victory, opening an uncertain chapter in the American Jewish story.”