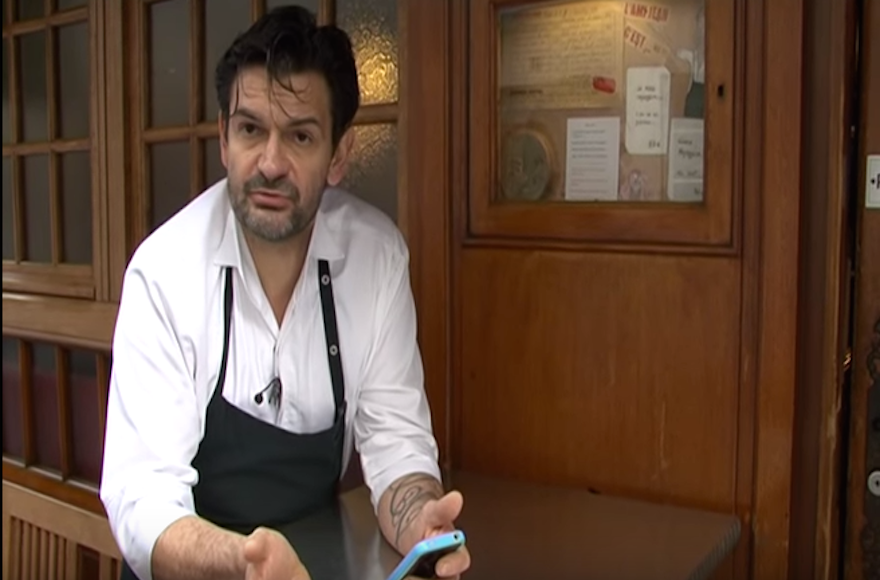 (JTA) – A top Parisian chef targeted by promoters of a boycott against Israel for his plans to visit the Jewish state hit back against his critics, whom he accused of dishonesty and discrimination.

Stéphane Jégo has leveled the accusations in correspondence on social media with activists for the Boycott, Divestment and Sanctions movement against Israel who in recent weeks have picketed outside his Parisian bistro and criticized him online for his attendance this month at an international culinary festival taking place in Tel Aviv.

Naming two of his accusers on Twitter, Jego wrote that they are “an affliction [hitting] people who are, at best, misinformed, mix everything up or at worst biased and dishonest.”

Jego, the head chef at L’Ami Jean in Paris, is one 13 chefs from renowned dining establishments around the world who are scheduled to participate in the Round Tables festival, which is sponsored by American Express.

Jego also retweeted a remark about BDS being illegal in France, where dozens of the movement’s activists have been convicted of incitement to discrimination due to their actions against Israel.

The guests, many of whom have also come under pressure by BDS activists, are traveling to Israel to take over the kitchens of local restaurants for a week. The chefs include professionals from New York’s Musket Room and Geneva’s La Bottega.

According to The Electronic Intifada, a pro-Palestinian media outlet, the Denmark-born head of a restaurant in Bolivia has pulled out of the festival due to the pressure.

Separately, the pro-Israel group ACOM in Spain vowed to take legal action against the government of the northeastern region of Navarra for passing a resolution earlier this month declaring Israel an apartheid state and supporting efforts to boycott the Jewish state. Some lawmakers of parties in the legislature have spoken in support of the measure.

Some 50 Spanish municipalities have passed resolutions in recent years endorsing BDS — more than in any other European country. But echoing belatedly the judicial policy of courts in neighboring France, the Spanish judiciary has cracked down on BDS in recent years.

ACOM has been involved in obtaining six similar rulings this year against local councils that passed resolutions in favor of BDS, including precedent-setting ones by some of Spain’s highest tribunals.