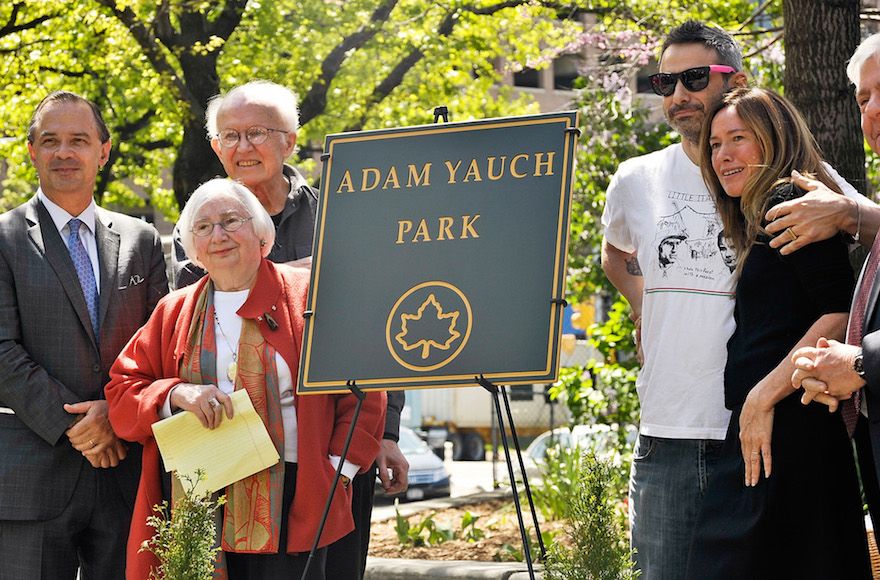 (JTA) — The two living members of the disbanded Beastie Boys rap group called for an anti-hate rally at the Brooklyn park named after their deceased bandmate after it was defaced with swastikas.

The rally is scheduled for 11:30 a.m. at Adam Yauch Park in Brooklyn.

On Friday, the park was spray painted with swastikas and the message “Go Trump.”

The Beastie Boys Twitter account posted a message Saturday that read: “Hate has no place in Brooklyn, NYC, or America. Join us on Sunday to stand against hate messages.”

Hate has no place in Brooklyn, NYC, or America.
Join us on Sunday to stand against hate messages.
11:30, Adam Yauch Park, Brooklyn, NYC pic.twitter.com/DZXcUyZauP

The New York Police Department Hate Crimes Task Force is investigating the incident. The graffiti has been removed.

Several swastikas have been scrawled in New York City and around the state since Election Day on Nov. 8, including on the doors of several dormitory rooms at the New School and on the apartment building of a gay Jewish state lawmaker in the Greenwich Village neighborhood of Manhattan.

“We are deeply disturbed by yet another highly visible anti-Semitic incident in New York,” said Evan R. Bernstein, ADL New York Regional Director. “Since the election, we have witnessed a wave of incidents targeting Jews and other minorities across New York State, and it is particularly offensive that this hateful graffiti was found in a park named after Yauch, an artist who was a passionate activist for peace, respect and diversity.

“We have been gratified to see a strong response to the vandalism from local children who covered the hateful symbols with hearts, as well as condemnations from Councilman Brad Lander and State Senator Daniel Squadron who forcefully denounced the incident.”

Yauch, known as “MCA,” died in 2012 at age 47 of cancer of the salivary gland. All three of the original members of the Beastie Boys were Jewish.