Trump says he does not want to ‘energize’ white supremacists, defends Bannon 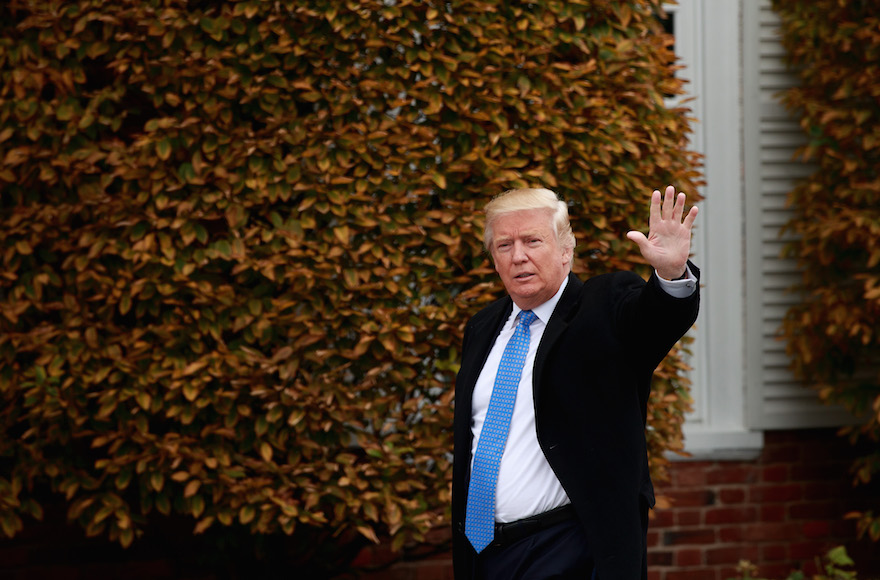 WASHINGTON (JTA) — President-elect Donald Trump said he wants to find out if and why he is “energizing” white supremacists.

“It’s not a group I want to energize,” Trump said Tuesday in a meeting with New York Times editorial staff, according to a tweet by Maggie Haberman, a reporter in attendance. Trump was referring to the alt-right, a loosely knit assemblage of white nationalists, anti-globalists, anti-Semites, anti-immigration advocates and people who revile political correctness. “And if they are energized I want to look into it and find out why.”

Trump on alt-right supporters: "It's not a group I want to energize. And if they are energized I want to look into it and find out why."

Trump also defended his chief strategist, Stephen Bannon, from charges that he has traded in racism and anti-Semitism.

Trump has come under fire, both during his campaign and since his election, for echoing themes and images familiar to the far-right, including using racially charged language and denigrating women. He has renounced racism, but only when asked by the media, while often also expressing resentment at being asked to do so.

Jewish groups and others have asked Trump to directly condemn an alt-right forum in Washington, D.C., over the weekend where participants celebrating Trump’s victory used racist language and made Nazi salutes.

Pressed on the matter, Trump’s transition team denounced racism, but did not directly address the event. Groups such as the Union for Reform Judaism and the Simon Wiesenthal Center have asked for a more direct repudiation.

The New York Times reporters pressed him on the alt-right conference, and he once again disavowed racism, saying “boy, you are really into” the issue.

New York Times White House reporter Julie Davis, who also participated in the meeting with Trump, tweeted that when asked directly about the event, the president-elect responded: “of course …. I disavow and condemn them.”

Asked point-blank about Nazi conference in DC over wknd: @realDonaldTrump tells @nytimes "of course" "I disavow and condemn them"

Trump in the interview also defended Bannon, who has been lambasted by an array of Jewish groups, among others, for injecting into the campaign themes that appealed to the alt-right, including conspiracy theories about a secretive cabal seeking global control.

“If I thought he was a racist or alt-right or any of the things, the terms we could use, I wouldn’t even think about hiring him,” said Trump of Bannon, who formerly led the far-right news website Breitbart, which Bannon has called a platform for the alt-right. “I think it’s very hard on him. I think he’s having a hard time with it. Because it’s not him.”

Of Breitbart, Trump said it is “just a publication” with a conservative outlook “that has become quite successful.”

He said “a lot of people are coming to” Bannon’s defense, referring to the aggressive pushback the campaign has launched at critics of Bannon, who has earned the support of some Jewish groups on the right, including the Zionist Organization of America and the Republican Jewish Coalition.

Trump also said he would “love” to broker Israeli-Palestinian peace, and suggested that his Jewish son-in-law, Jared Kushner, could help.