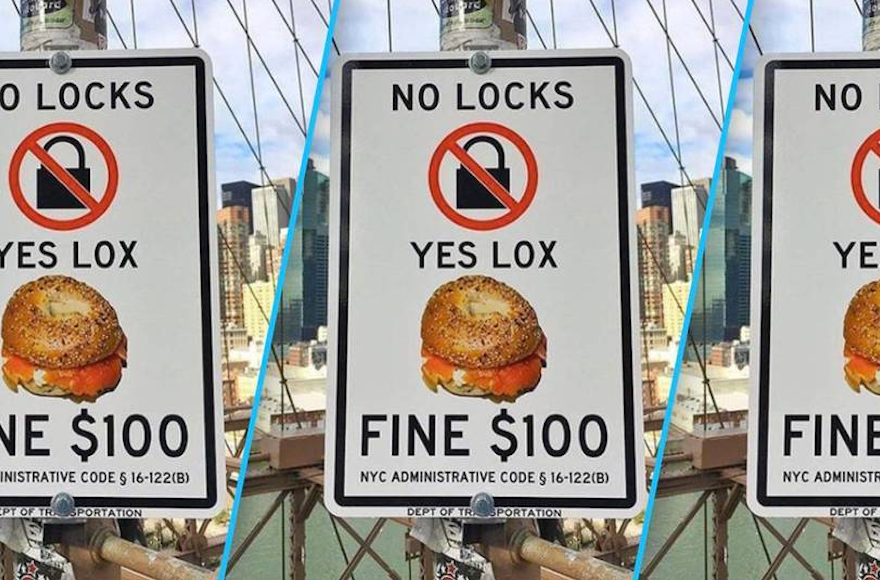 New York City’s Department of Transportation does not want you leaving locks on the Brooklyn Bridge. But eating a big bagel with lox and cream cheese? That is strongly encouraged.

A new sign that popped up on the heavily trafficked bridge in October, complete with a bagel image, reads “NO LOCKS YES LOX.”

As explained by Mic.com, the sign is meant to discourage people from leaving so-called “love locks” on the bridge as a symbol of affection. The practice is also common in European cities like Paris and Rome, but it can weigh down bridges and cause damage. Mic reports that locks on the Brooklyn Bridge caused a wire holding to snap on Sept. 8, leading to hours of repairs and traffic delays. Violators can be fined.

The “yes lox” sign features a photo of an everything bagel from Leo’s Bagels in the Financial District, near the DOT’s offices.

If an official city sign with a bagel on it seems unexpected to you, you aren’t alone — sign maker John Jurgeleit told Mic that even he was surprised the DOT ate the idea up.

“We did regulatory signs and then [city officials] wanted something a little more whimsical,” said Jurgeleit, who reportedly makes between 85,000 and 100,000 signs for the city each year. “As a goof, I came up with this and sent it over and our [Transportation Department] commissioner, who has a great sense of humor and a love of signs also, she loved it — she went with it … to my surprise.”

Less surprisingly, the sign has been a hit on social media.

But city officials should be careful what they wish for — there’s probably enough lox in Brooklyn to weigh down a bridge.