Alan Gross on Fidel Castro: ‘History will never absolve him’ 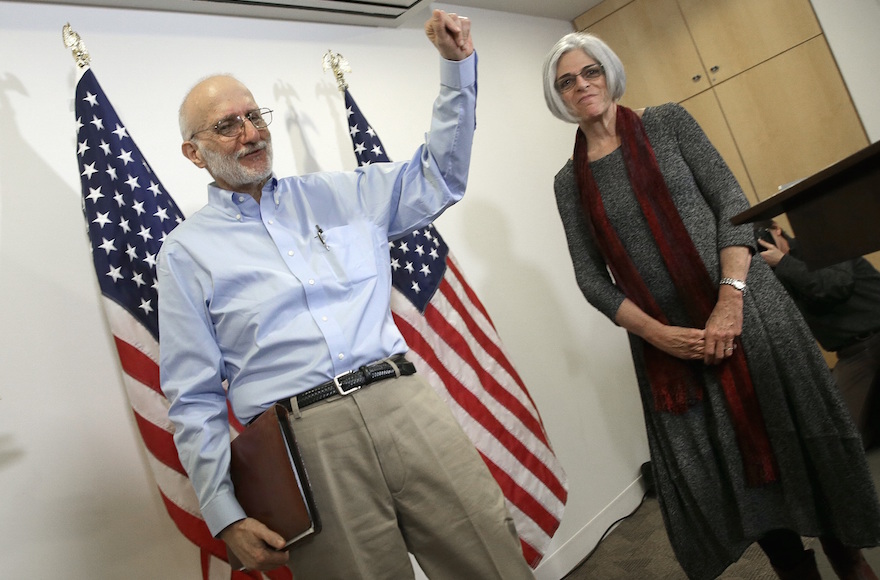 Alan Gross, freed from a Cuban prison earlier in the day, waves after concluding his remarks with his wife, Judy, at a news conference in Washington shortly after arriving in the United States, Dec. 17, 2014. (Win McNamee/Getty Images)
Advertisement

(JTA) — Alan Gross, who was imprisoned for five years in Cuba while trying to assist its Jewish community, said following the death of Cuban leader Fidel Castro, “History will never absolve him.”

Castro’s death at the age of 90 was announced on Friday night by his brother, Raul, Cuba’s current president.

“History will never absolve him. But perhaps now the voices of Cuba will be heard. Speak up, Cuba,” Gross tweeted shortly after Fidel Castro’s death was announced.

History will never absolve him. But perhaps now the voices of Cuba will be heard. Speak up, Cuba.

In later tweets he called for the United States to lift its embargo on Cuba.

When he was arrested in 2009, Gross, of Potomac, Maryland, was working as a subcontractor for the U.S. Agency for International Development setting up internet access for Cuban Jews. He wasn’t charged until 14 months into his detention when he was “accused of being a threat to the integrity and/or independence of the state.”

Gross was released in December 2014 as part of a broader exchange in which three Cubans convicted of spying were released from American prisons. The same day, President Barack Obama announced renewed ties with the communist nation.

Gross has called for improved ties between the United States and Cuba. In September, he endorsed then-Democratic presidential candidate Hillary Clinton, citing in part her commitment to the Obama administration’s new openness to Cuba.