London cafe apologizes for smoothie with swastika on the label 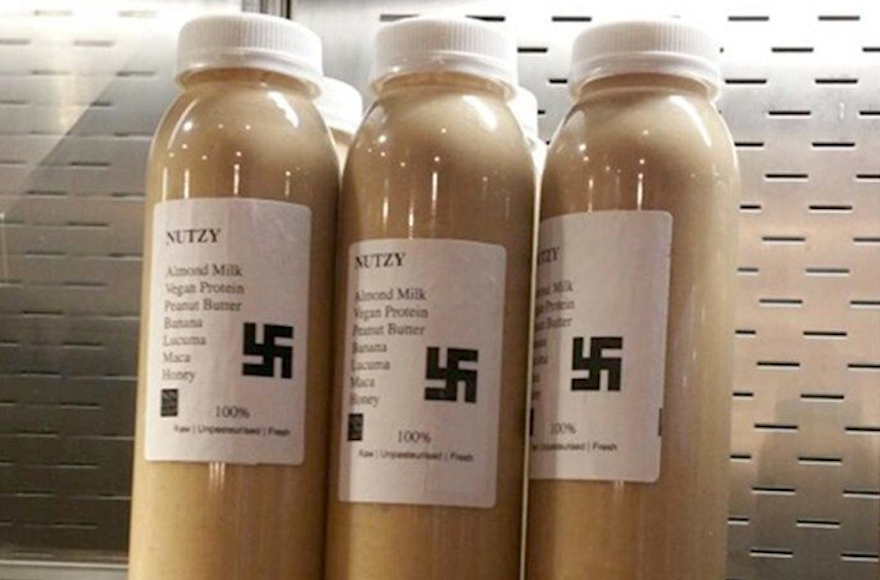 (JTA) — A London café has come under fire for selling a smoothie with a swastika drawn on the label of the bottle.

Called the “Nutzy,” the smoothie was being sold at the Nin Com Soup café in north London, the London-based Jewish Chronicle reported. The cafe’s founder later apologized.

A Holocaust survivor reported the smoothie and its label to the Campaign Against Antisemitism, a British watchdog charity.

“I left the shop almost in tears and shivering as it proved to me how much anti-Semitism and fascism is still utterly present,” the survivor said.

Speaking of the shop’s manager, the survivor said, “That man had no shame whatsoever to tell me that I should not be offended by what I saw when the use of the swastika and the name of that drink is clearly not a coincidence.”

“Nutzy” smoothie with swastika branding removed from sale by @NinComSoupLdn after CAA interveneshttps://t.co/ZzyDHoqXD6

The café’s founder, Ben Page-Phillips, said Sunday in an apology posted online that the swastika on the bottle was “unsanctioned,” and that the bottles were removed immediately after the manager was alerted.

“This was incomprehensible, extremely insensitive, and upsetting to all of us. We unreservedly apologize,” the statement said.

Karen Pollock, chief executive of the Holocaust Educational Trust, told the Chronicle: “This ‘branding’ attached to this soft drink is offensive – it demonstrates, at best, a lack of sensitivity and, at worst, complete disrespect for the millions murdered during the Holocaust.”