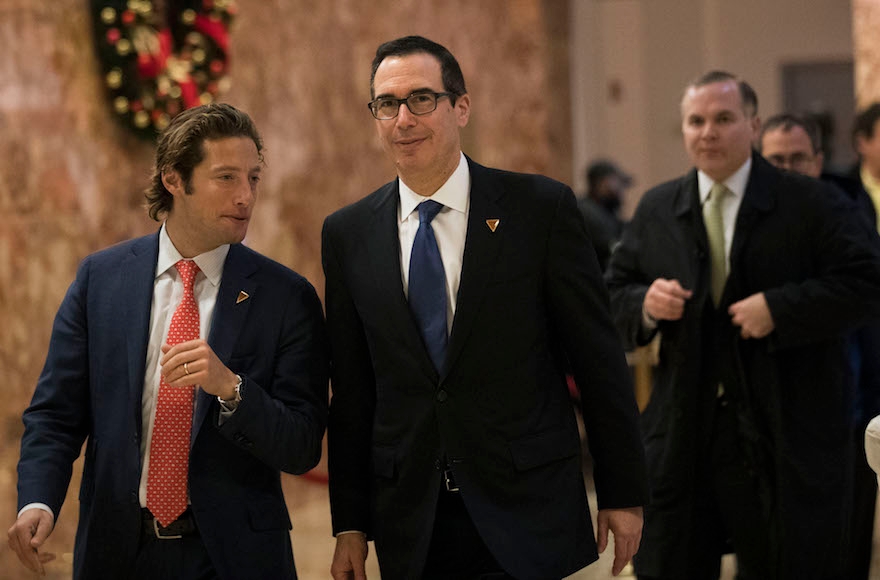 All three deal with money: Blankfein as CEO of the Goldman Sachs investment back, Soros as a leading hedge funder and Yellen as chairwoman of the Federal Reserve. All three are Jewish.

And now, Blankfein and Soros also have this in common: They both once employed Steven Mnuchin, the man who would be President Trump’s Treasury secretary – and who also is Jewish.

Mnuchin, who confirmed Wednesday he was Trump’s Treasury pick, reported to Blankfein in the 1990s when Blankfein helmed Goldman Sachs’ fixed income division. (Blankfein told the Washington Post that Mnuchin was a “very smart guy” when he knew him, but they haven’t stayed in touch over the years.)

After leaving Goldman Sachs in 2002, Mnuchin spent a brief period working for Soros, who then helped him set up Duke Capital Management.

Mnuchin was one of the early establishment Republican donors who backed Trump, and was the finance chairman for the campaign.

This raises three questions for the Trump transition team, and for Mnuchin:

What did Mnuchin think of the ad?

Lots of Trump defenders on social media are pointing to the naming of Mnuchin to refute claims Trump is an anti-Semite (although few of the same the same folks eased up on Obama when he named a former civilian volunteer for the Israel Defense Forces, Rahm Emanuel, as his chief of staff).

The more credible accusation against Trump is not that he is anti-Semitic, but that he and his campaign have trafficked in language and conspiracy theories that would immediately be understood by anti-Semites as signaling Jewish villainy — and galvanize them to back the campaign. In the closing ad, photos of Soros and Yellen accompanied Trump’s denunciation of “those who control the levers of power in Washington” and “the global special interests.” Blankfein’s face was used to illustrate the “global power structure that is responsible for the economic decisions that have robbed our working class, stripped our country of its wealth and put that money into the pockets of a handful of large corporations and political entities.”

As campaign finance chairman, Mnuchin might well have signed off on the ad. What did he think, not just of the framing of relatively obscure Jewish banking figures as villains, but of the inclusion of two people who mentored him?

What will Trump’s voters think of the choice?

Mnuchin is not just a graduate of the moneyed class Trump claimed to repudiate during his campaign, or of the very firm that Trump said had “total control” over Hillary Clinton: He is known for running a bank, OneWest, that profited from as many as 36,000 foreclosures, according to a housing advocacy group.

NPR tracked down a couple, Rose and Rex Schaffer, who lost their home of nearly 50 years after failing to persuade a phalanx of bureaucrats to back down. They voted for Trump. Asked about Mnuchin’s new prospective job, they sounded puzzled: “If he can’t run his own little bank, how can he handle a large thing for the United States?” Rose Schaffer asked.

Questions like that may proliferate. Trump, who campaigned hard on a protectionist platform, is naming Wilbur Ross, a billionaire who has explored China’s markets for investment opportunities, as his Commerce secretary.

What happens to Yellen?

Janet Yellen is the only villain in the Trump ad who does not seem to have once had a nurturing relationship with Mnuchin, so she’s yesterday’s news, right?

Not so much. Trump obviously doesn’t like her, saying during the campaign that the Fed kept interest rates artificially low to prop up Obama, but there’s not much he can do until 2018, when her term ends and he gets to name her replacement.

Then again, Trump is flirting with folks he lacerated during the campaign; after he and 2012 nominee Mitt Romney exchanged terms of art like “fraud” and “loser,” Trump is now considering Romney for secretary of state.

Mnuchin in his interviews seems more focused on a tax overhaul then he does on the Fed; on Wednesday morning, he told CNBC that Yellen was doing a “good job.”