An anti-Trump comics collection edited by the Spiegelman family 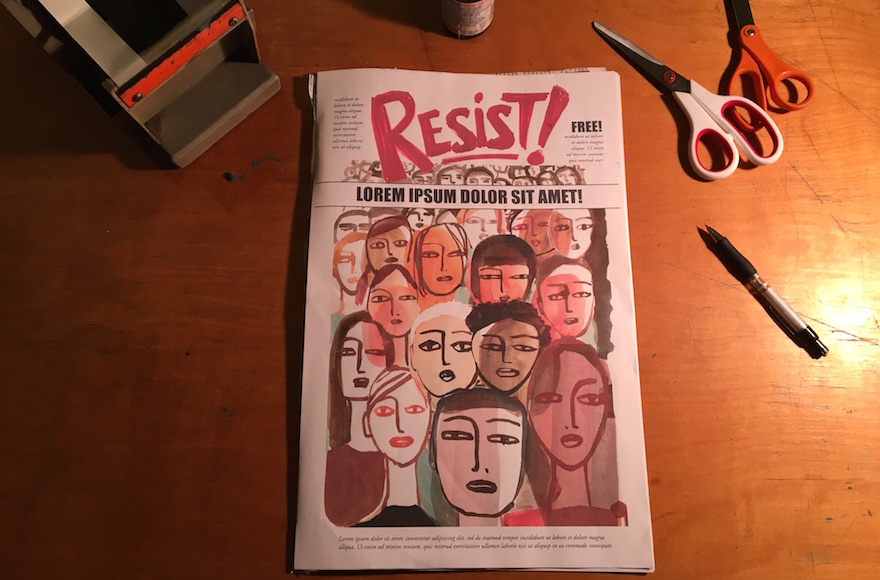 Nadja Spiegelman is no stranger to controversial art.

She’s the daughter of Art Spiegelman — the artist and writer best known for “Maus,” his seminal graphic novel about the Holocaust — and Francoise Mouly, the New Yorker’s art director, where she often produces strikingly political covers.

Now Nadja Spiegelman, 29, who has written children’s books and a memoir about her upbringing, is stepping into the political fray. Alongside her mother, she is editing a collection of comics and illustrations on the theme of “political resistance to the forces of intolerance” called “RESIST!”

Some 30,000 copies of the fervently anti-Trump publication — a special issue of Gabe Fowler’s “quarterly tabloid comics anthology” Smoke Signal — will be distributed for free in Washington, D.C., on Inauguration Day in January. More copies will be given away at women’s marches across the country in the days after.

As the submissions — including some from big names like Roz Chast — come in, some illustrations have already been posted online. They may not make the publication’s final cut, Spiegelman told JTA — she said the goal is to create an online archive, as well as foster a community of artists in dialogue with one another. One image shows a monk trying not to “think about Trump” while meditating. Another features a pregnant woman with her belly stuck in a pillory — a perceived jab at some of the incoming Trump administration’s proposed policies, such as defunding Planned Parenthood and overturning Roe v. Wade. 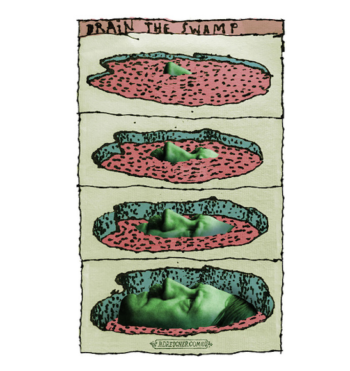 One of the early submissions to RESIST! critiques Trump’s efforts to “drain the swamp” of political insiders. (Henrik Drescher)

Some illustrations also tackle anti-Semitism, and the phrase “RESIST the normalization of fascism” appears at the top of the site’s “about” page. One image references Trump’s promise to “drain the swamp” of political insiders in Washington, showing Hitler’s head appearing at the bottom of a body of water. In another, swastikas morph into different images, like a window and a kite.

Spiegelman, who says she “can’t help but identify” as a member of the tribe, had an interesting Jewish upbringing. Mouly converted to Judaism before marrying Art Spiegelman, who famously chronicled his parents’ harrowing Holocaust saga in “Maus.” She said the family celebrated Jewish and Christian holidays in a kind of “cynical” way, with various outside influences — such as Marxist texts and “Day of the Dead” dolls.

Spiegelman says she and her mother have already received far more submissions for RESIST! than they expected — around 500 or so in the first week.

“We’ve clearly hit a nerve,” Spiegelman said. “There’s such a need that people have, especially artists, to find ways to begin to pick up a pen and fight against this. Now more than ever we do need to use our voices and make them as loud as possible.”

The concept originated with Fowler, who runs the Desert Island comics store in Brooklyn, where he produces his quarterly comics publication. He wanted to respond to the election by giving female voices an opportunity to express their reactions and fears. So for the first time, Fowler decided to have an issue edited by women. He reached out to Mouly and asked her to head the project; she subsequently asked her daughter to help.

At first, the idea was to only accept submissions from women and focus on women’s issues. The team has since broadened its scope —  they are accepting submissions from men as well, but issues of female concern remain a dominant theme.

“When you start to see the submissions by women together, you start to hear this very powerful collective female voice that I’m glad we’re giving space to,” she said.

Spiegelman said she hasn’t received any of the online anti-Semitic abuse coursing through Twitter in recent months. But her mother received some hate mail after publishing a New Yorker cover that criticized Trump’s intention to build an impenetrable wall on the border with Mexico.

“She forwarded it to the rest of the family, saying ‘Wow, I must be doing something right!’” Spiegelman said.