A new, for-profit brand aims to engage a younger generation with Jewish life 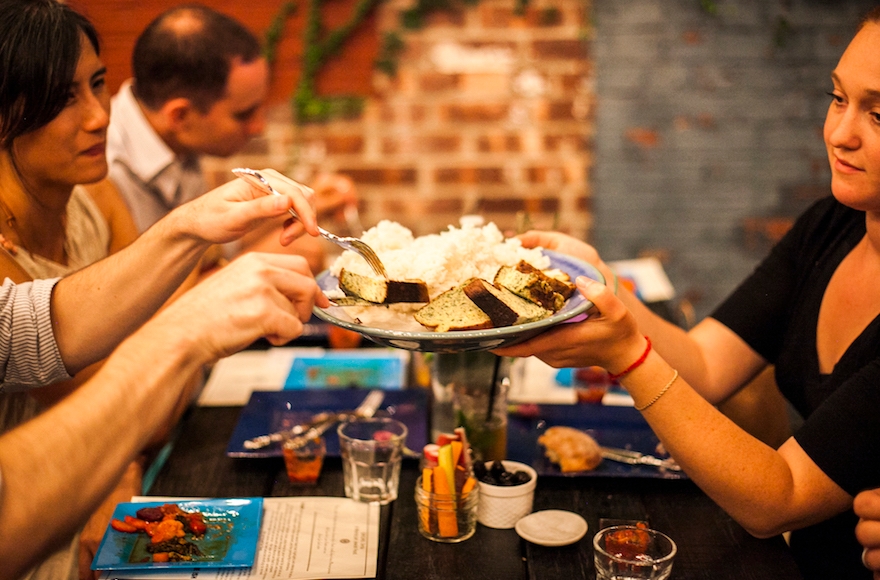 Immersive experiences, like the Origins dinner series, are one way Arq seeks to engage people with Jewish life and culture. (Courtesy of Danya Shults)
Advertisement

A young entrepreneur is seeking to engage people in Jewish life. But to achieve her means, she’s implementing a unique strategy — or unique within the Jewish world, anyway: a for-profit business model.

Arq, a media company and lifestyle brand launching Tuesday, is designed for people — not just Jews — to connect with Jewish life and culture in a “modern” way, according to founder Danya Shults.

Unlike many Jewish startups, however, Arq isn’t relying on donations and grants. Instead, it’s designed to be a revenue-generating, for-profit business.

“I think the Jewish world needs that so badly. If they’re not going to pay for it, they don’t want it,” Shults said of its potential customers.

Shults’ professional background is in technology and venture capital — “I’ve built businesses that made money,” she said — but she’s no stranger to the world of bootstrappy, DIY Jewish experiences. She is the founder of Pop-Up Shabbat, “a seasonal, Jewishly sourced pop-up dinner series,” as well as The Ish, a clever weekly newsletter about all things “Jew-ish.”

Inspired by an array of brands and websites — Food52 and Apartment Therapy, among them — Arq aims to engage Jewish-curious folks through content, e-commerce (“mostly centered around Jewish lifestyle products, which includes Judaica, pantry items, branded swag — stuff that fits in with the brand”) and events.

One such event is Origins, an occasional dinner series in partnership with the creative production company Our Name is Farm that will feature traditional Jewish food from around the world.

The first Origins event, Zerda, was a Moroccan feast held in September at Brooklyn’s Kings County Distillery. While a band featuring an oud — the Middle Eastern lute — played, guests who paid $55 to $65 for the evening mingled in a courtyard sipping whiskey cocktails while henna was applied to their hands. The three-course meal, which included salads and lamb meatballs, was served family style on picnic tables, with guests swapping stories as they passed dishes around.

“You can create magical communal experiences around food,” Shults said, adding that a Chinese-Jewish event is in the works.

“Food is central, but that’s not the only thing that will show up at events,” she said.

Another key component to Arq and its programs: high-quality design. It’s something that is reflected in everything from the location of events to the decor.

To that end, the e-commerce portion of Arq, which is expected to launch in the spring, will feature “limited-run exclusive collaborations,” she said.

Expect these items to be “aesthetically elevated, Brooklyny, Kinfolky,” Shults said, referencing the Brooklyn-based brand that tackles everything from throwing parties to publishing a magazine to selling kombucha and designer clothes.

Arq’s goal: To be a “truly accessible consumer brand that appeals to people because of its design, tone and diversity, in terms of content, people and faces,” Shults said.

“And then I can sprinkle on the Jewish later,” she said, “once I’ve caught them in my web.”