Trump’s defense chief pick said Israel can be a pain, but few in pro-Israel camp seem to care. Why? 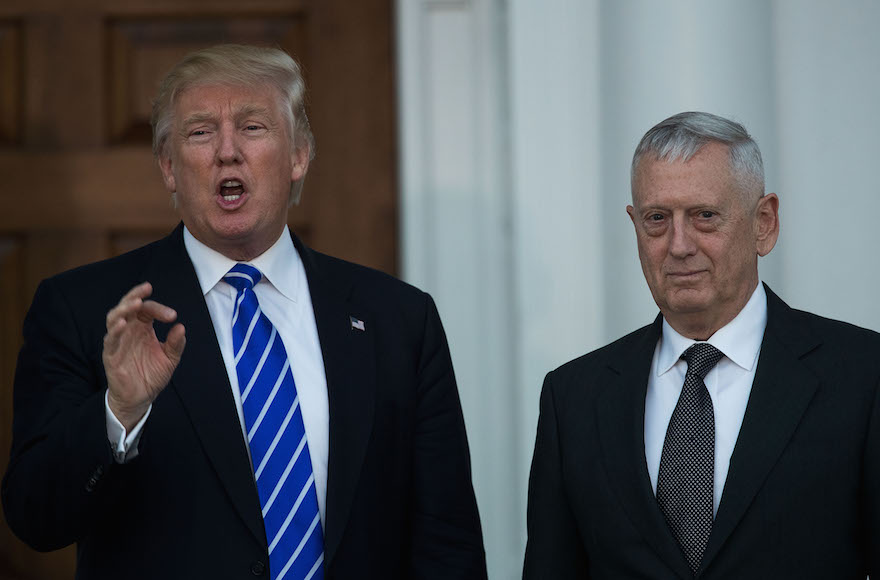 WASHINGTON (JTA) — President-elect Donald Trump’s nominee for defense secretary is on the record decrying the burdens that Israel places on the United States and warning that the Jewish state could be headed toward apartheid. And with one notable exception, the right-wing pro-Israel community is enthusiastically on board.

In 2013, Gen. James Mattis, then recently retired as the top American commander in the Middle East, said he paid a “military security price every day” for U.S. support of Israel. The Republican Jewish Coalition and the Jewish Institute for National Security Affairs, despite waging a fierce battle four years ago against an Obama defense pick deemed too critical toward Israel, are now defending Mattis, who is slated to be formally nominated by Trump on Tuesday evening.

“The selection of General Mattis to serve as Secretary of Defense is a smart and important decision by President-elect Trump,” Republican Jewish Coalition Executive Director Matt Brooks said in a statement. “Throughout his career, General Mattis has made the protection of the United States, our assets, and our allies around the world his top priority. General Mattis believes in a strong U.S. military posture and understands the threats we face, like a newly aggressive Iran. He has the type of worldview the leader of our Defense Department needs.”

The comments that have raised concern were made in July 2013, just after Mattis retired as head of the U.S. Central Command, or CentCom, the Pentagon post that oversees most of the Middle East (but not Israel) and western Asia. In his remarks, Mattis praised Secretary of State John Kerry for pushing hard to revive Israeli-Palestinian peace talks, efforts that collapsed in mutual acrimony within a year.

“If I’m Jerusalem and I put 500 Jewish settlers out here to the east and there’s 10,000 Arab settlers in here, if we draw the border to include them, either it ceases to be a Jewish state or you say the Arabs don’t get to vote — apartheid,” Mattis said. “That didn’t work too well the last time I saw that practiced in a country,” noting South Africa.

“So we’ve got to work on this with a sense of urgency, and I paid a military security price every day as the commander of CentCom because the Americans were seen as biased in support of Israel and that moderates, all the moderate Arabs who want to be with us, because they can’t come out publicly in support of people who don’t show respect for the Arab Palestinians.”

Both JINSA and the Republican Jewish Coalition have defended Mattis’ record, though JINSA has not formally endorsed his nomination, leaving the Zionist Organization of America as the one right-wing group to oppose him. In a statement last month, the group’s president, Morton Klein, said Mattis’ remarks were “hostile to Israel, and revealed a lack of appreciation for and understanding of the extraordinary value to American security resulting from a strong American-Israeli alliance and a secure Israel.”

Jewish Democrats, meanwhile, are incredulous at the lack of concern over the Mattis remarks after eight years of what they saw as hyper-scrutiny of every Israel-related remark by President Barack Obama, his Cabinet and anyone remotely associated with him. Four years ago, Chuck Hagel’s nomination as defense chief was nearly derailed because of critical comments about Israel, including his suggestion that “The Jewish lobby intimidates a lot of people up here.” A number of Jewish groups, including the RJC and JINSA, then launched a major push to block the former Nebraska senator’s appointment.

“I’m not saying General Mattis is anti-Israel, but if he were under consideration to be secretary of defense for President Obama or a President-elect Hillary Clinton, Republicans would be tripping over themselves to condemn the Democrat as hostile to Israel,” Aaron Keyak, a strategist who is a consultant for Jewish and Democratic groups, told The Jerusalem Post last month.

So why is Mattis not arousing the opposition of the pro-Israel right wing?

In part, it’s due to Mattis’ well-known hostility toward Iran. Speaking in April at the Center for Strategic and International Studies here, Mattis described Iran as “the single most enduring threat to stability and peace in the Middle East,” according to LobeLog, a Middle East analysis website. He reportedly was forced out of CentCom in 2013 — just as the Obama administration was pivoting to engage Iran over its nuclear program — because of his persistent skepticism of the country.

Isolating Iran is where the right-wing pro-Israel rubber hits the road, and Mattis’ hard line goes a long way toward appeasing other concerns that pro-Israel groups may have. Hagel, by contrast, was among a handful of political figures who counseled engagement with Iran long before Obama’s pivot and also questioned the efficacy of sanctions.

“The most important issue for those of us who care about a strong Israel and a secure Israel, and the more relevant issue as secretary of defense, [is that] he is known as very strong on the Iran issue, he was seen as almost too strong for the Obama administration,” said JINSA President and CEO Michael Makovsky.

Still, the enthusiasm for Mattis may be short-lived. At the April event in Washington, Mattis said he was opposed to scrapping the deal, which the RJC and JINSA detest and Trump has promised to reassess.

“I want to make clear there’s no going back,” Mattis said. “Absent a clear and present violation [by Iran], I don’t think we can take advantage of some new president — Republican or Democrat — and say, ‘Well, we’re not going to live up to our word in this agreement.”

On this point and others, the pro-Israel groups hope Mattis will evolve. As the general in charge of CentCom, Mattis dealt little with Israel. His interlocutors were top Arab officials inclined to convey their frustrations with the close U.S.-Israel alliance. David Petraeus, another former CentCom commander under consideration for a Trump Cabinet position, has similarly said the relationship with Israel inhibits closer U.S.-Arab cooperation.

The Hagel example also suggests that defense chiefs can still win high marks from the pro-Israel community despite past criticism. After the controversy over his nomination, Hagel went on to become perhaps the Obama Cabinet’s best-liked figure among Israelis by ensuring that whatever else was roiling the relationship, security cooperation intensified. The Anti-Defamation League and Moshe Yaalon, Hagel’s Israeli counterpart, both went out of their way to praise him when Obama forced him out in 2014.

The same goes for other top defense officials. Gen. James Jones, Obama’s first national security adviser, raised eyebrows when he began remarks to a Jewish audience with a joke about a Jewish con man who gets the better of a Taliban fighter. Today, Jones gets high marks from the pro-Israel community for his work in 2007 launching Israeli-Palestinian security cooperation.

Similarly, Gen. George Brown, chairman of the Joint Chiefs of Staff under President Gerald Ford, said in 1974 that Jews own the banks and the newspapers, but still played a key role in rushing defense assistance to Israel during the Yom Kippur war the previous year.

Fred Brown, the spokesman for the Republican Jewish Coalition, said that Mattis had already changed his positions with greater exposure to the Israeli point of view.

“Since those statements he’s visited Israel and he spoke highly of Israel,” Brown said. “He’s changed his opinion.”