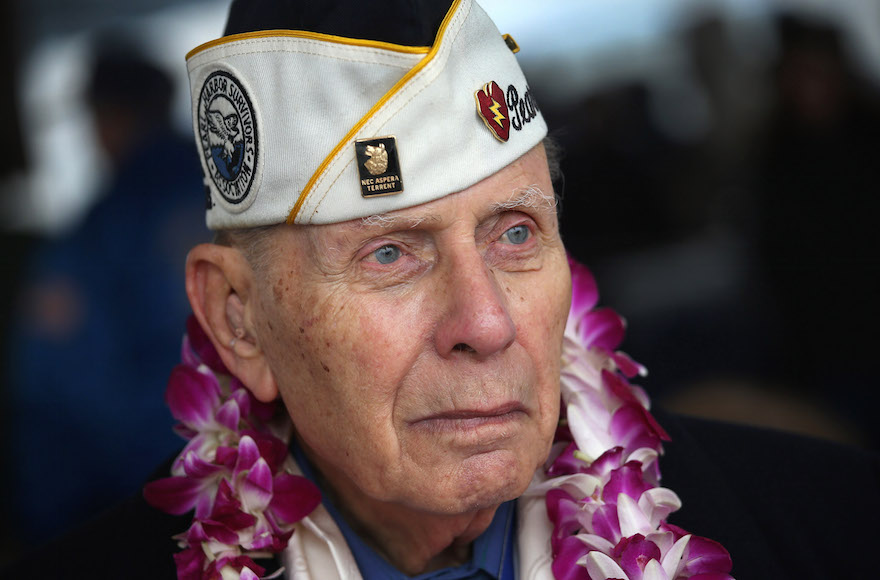 (JTA) — With Japanese planes buzzing overhead, Pvt. Aaron Chabin ran to his post at Pearl Harbor where his commander handed him a loaded gun — and told him to save the last bullet.

“He handed me my weapon, and said ‘Don’t be taken prisoner,'” Chabin, now 94, recalled in a phone interview on Wednesday, the 75th anniversary of the attack that killed 2,400 people and plunged the United States into World War II.

At 7:30 a.m. on Dec. 7, 1941, Chabin was relaxing on his bed in the Schofield Barracks reading the Honolulu Advertiser when the soldiers heard an explosion. Used to a”very casual” atmosphere on a beautiful island, Chabin said they were shocked by the attack, and totally unprepared.

“Someone ran out on the balcony of the barracks, and they said, ‘It’s the Japs!'” he recalled. “And someone else said, ‘Are you crazy?’ I ran out to get my weapon, and I went to my post, which was the communications center.”

Chabin spent the rest of the day relaying phone messages between officers, watching Pearl Harbor go up in smoke and flames. At night, he went to the base to stand guard — something that he hadn’t always had to do. Before that day, no one had expected the base to be attacked. “It was chaos,” he said.

Born to a Jewish family in Detroit that soon moved to New York, Chabin enlisted in the army at 18. It was peacetime and he was hoping for some adventure and maybe a career. Given the choice of being stationed in the continental United States, the Philippines, Panama or Hawaii, he chose Hawaii. One of the soldiers in his barracks was James Jones, who wrote the World War II novel “From Here to Eternity,” set at Schofield Barracks.

Chabin had just completed basic training when the attack happened.

“It was very confusing at the beginning,” he said. “Later on, we calmed down when we realized the Japanese weren’t going to invade the island. If they had invaded, it would have kept the war going for a couple more years, because from the Hawaiian Islands they could have attacked the West Coast.”

Deemed too light to enter the infantry, Chabin spent the rest of the war in the Signal Corps at Pearl Harbor, eventually rising to lead the communications staff there. He says the post was “just a matter of luck.” But his wife Helene differs: “I feel it was more than luck,” she said. “I’m more religious.”

After the war, Chabin returned to New York and briefly attempted a career in professional singing. He later found his niche managing liquor stores across the city, including one next to Yankee Stadium. He and Helene married in 1954 and have two children, five grandchildren and four great-grandchildren.

Chabin doesn’t have any friends left from that fateful day in Hawaii, but still stays in touch with other survivors of the attack. Before speaking to JTA, he attended a memorial ceremony on the U.S.S. Intrepid, the aircraft carrier docked in Manhattan that now serves as a museum.

One of his most poignant memories is from 1991, when he returned to Pearl Harbor for the attacks’ 50th anniversary. While there, he found his name on the active duty roster from that time and visited the same barracks he lived in when the planes flew overhead.

“They hadn’t changed,” he said.