I celebrate Hanukkah — but here’s why I love Christmas 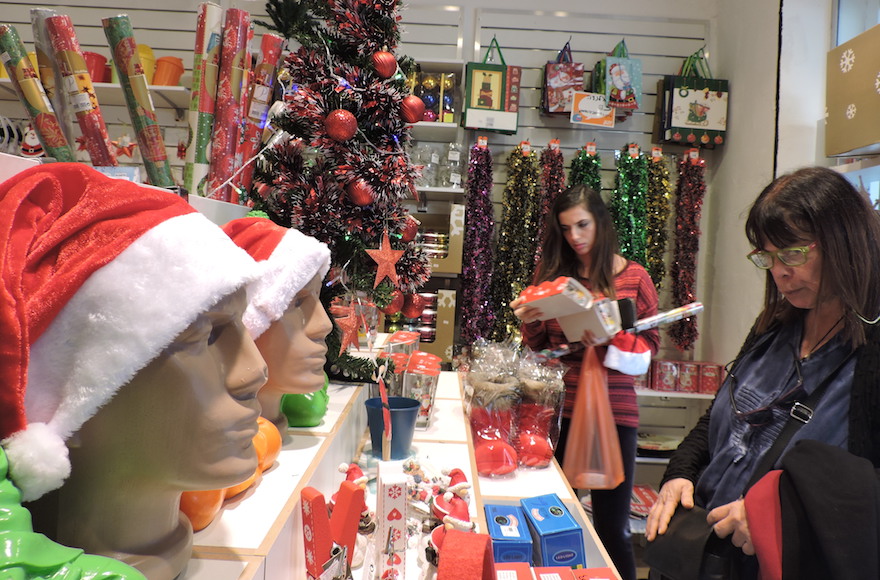 Customers shop for the holidays at Joy, a small Tel Aviv store that sells Christmas and New Year's merchandise. The store has been repeatedly heckled for selling Christian goods. (Ben Sales)
Advertisement

(JTA) — All I want for Hanukkah is Christmas.

I grew up in suburban Chicago surrounded by my fellow Jews — at school, at camp, on the weekends, at my parents’ friends’ houses, in the streets and parks of my neighborhood.

Even then, I knew that Jews made up less than 2 percent of America’s population — but in my childhood world, we were the 99 percent. If you had stopped 11-year-old me on the street and asked, I could have recited lengthy Hebrew prayers by heart, or told you about the codifying of Jewish law in 200 C.E. But when it came to Christianity, I had a basic idea of what Easter was, and could have probably provided a brief bio of Jesus, culled mostly from popular culture. That was about it.

Until December rolled around, that is. Christmas was inescapable — and I loved it. I still do.

Christmas is everywhere. It’s at the malls, in the candy aisle of the grocery store, on the radio and TV, and in the movie theater. And I get how it can all be overwhelming. I understand how it’s a bit much for people to be bombarded starting from Thanksgiving — make that Halloween — with carols and candy canes and Santa and reindeer and manger scenes and ornaments and mistletoe and trees. And I know that for lots of people, it’s bit much how everything is red and green, especially if it’s not even your holiday. Plus — on an intellectual level, at least — I object to the commercialism, the conspicuous consumption and the tackiness of it all.

But if I’m being honest: I love the tackiness. I love the manufactured happiness. I love feeling snow on my shoulders, walking into a heated cafe, sipping hot cider and hearing a Christmas song — probably written by a Jewish composer — on the speakers. I love the contrast between the terrible weather and the enveloping cheer, however artificial it is. I love being able to enjoy the Christmas spirit without having to worry about how it affects the way I celebrate Christmas.

Because I don’t celebrate Christmas. See, we Jews have our own winter festival — it’s called Hanukkah. 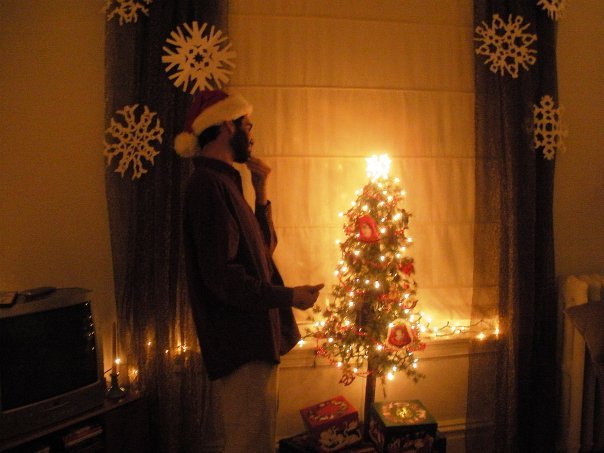 The writer at a Christmas party in 2008. (Courtesy of Ben Sales)

Don’t get me wrong: I like Hanukkah. But in America, it’s kind of weak sauce. If Christmas is a thick, juicy hamburger on a sesame bun, American Jews have tried to make Hanukkah into a black-bean burger — something that’s perfectly edible but, really, nothing like the real deal. Hanukkah, like black beans, would be fine as its own separate thing. But instead we’ve flattened it into a cheap imitation of something else.

I’m Jewish, so of course I celebrate Hanukkah. I’m down with the story, the victory of the weak over the strong, the faith fulfilled when a small flask of oil lasted eight days. I’ve even nerded out over the two alternate Hebrew spellings of “Maccabee” and how they correspond to today’s religious-secular divide in Israel.

Just as I can enjoy the Christmas spirit because I don’t feel personally invested in the holiday, I feel disappointed in Hanukkah precisely because I am invested in it. And in any case, Hanukkah is a minor holiday. I don’t begrudge its significance for anyone, but in Jewish tradition it’s treated as less important than Rosh Hashanah, Yom Kippur, Passover and a couple others.

That’s why, in Israel, where I lived for five years, Hanukkah is certainly celebrated, but doesn’t receive top billing. There are decorations, menorahs in the windows and sufganiyot — doughnuts filled with jelly or cream — on bakery shelves. Kids get a few days off to sing and play. Giving Hanukkah presents isn’t really a thing there.

Contrast that with the season that runs from Rosh Hashanah through Sukkot and Simchat Torah, a series of festivals and holidays that ended several weeks ago. In Israel, before Rosh Hashanah, supermarkets are stocked with apples, honey and pomegranates, and temporary stands sell greeting cards on the sidewalks. On Yom Kippur, the streets and shops are all closed. Religious people wear white and gravitate en masse to synagogue, while those who aren’t fasting crowd the empty streets with bikes. On Sukkot, there are temporary huts seemingly everywhere, from people’s porches to public squares.

For close to a month, little business gets done. Need to schedule a meeting or start a work project? “After the holidays” is the common refrain. The Jewish holidays there are celebrated on their own merits, not judged against the overwhelming dominance of another religion’s season.

So spare me your Chrismukkah and your Hanukkah bush, and let me culturally enjoy the most wonderful time of the year the way America clearly wants me to.

After all, if Bob Dylan can rock out to an album’s worth of Christmas music, so can I.