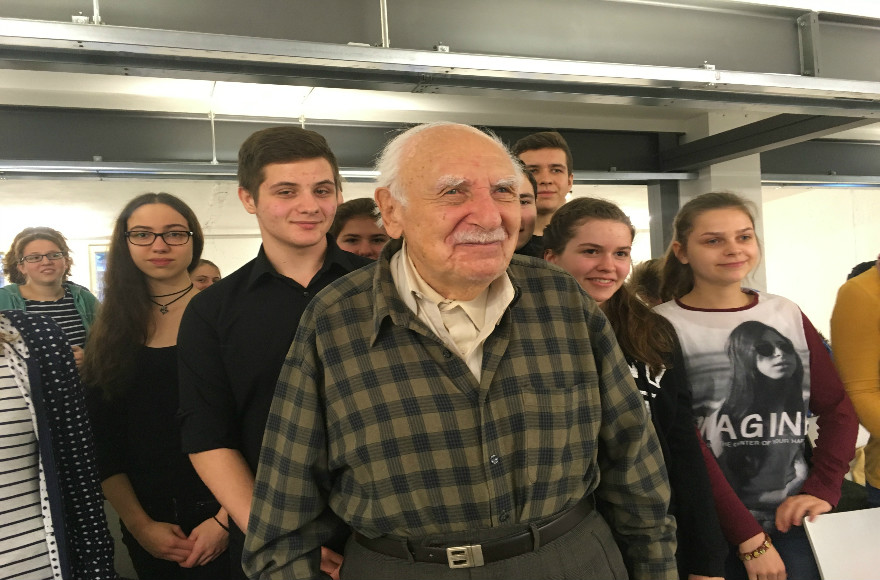 Marcel Tuchman, 95, meets in Berlin with German, Polish and Austrian high school students who are studying the history of Nazi-era slave labor.

BERLIN (JTA) — One of Germany’s largest corporations – Siemens – has financed the German publication of the memoir of a former Jewish slave laborer who worked in a Siemens factory outside Auschwitz.

Marcel Tuchman, 95, a renowned physician in New York, was in Berlin this week to mark the release of his translated autobiography, “Remember: My Stories of Survival and Beyond.” The original was published by Yad Vashem in 2010; the German edition is a Metropol publication.

Speaking to a group of German, Polish and Austrian students at the Documentation Center of National Socialist Forced Labor in Berlin, Tuchman said he would not have survived had he not believed that “all the world would know about what was happening. That gave us strength.”

Tuchman was born in Poland in 1921. He was 21 when he and his father were selected at Auschwitz – along with some 100 others – to construct and then work in the Siemens Bobrek factory outside the main camp.

The SS evacuated the workers in a death march from Auschwitz in January 1945. They were transferred from Buchenwald to Berlin. A few months later, the war was over. Both Marcel and his father survived.

While in Berlin, Tuchman met with Siemens management and with the high school students, who were taking part in a week-long program focusing on the history of Nazi-era slave labor.

Tuchman’s trip was sponsored by the Berlin Senate, which brings survivors to retrace the past and meet with today’s younger generation. He was accompanied by his son, the American documentary filmmaker Jeffrey Tuchman, and by Berlin-based historian Thomas Irmer.