These millennial Jews are protesting Trump — and Jewish groups 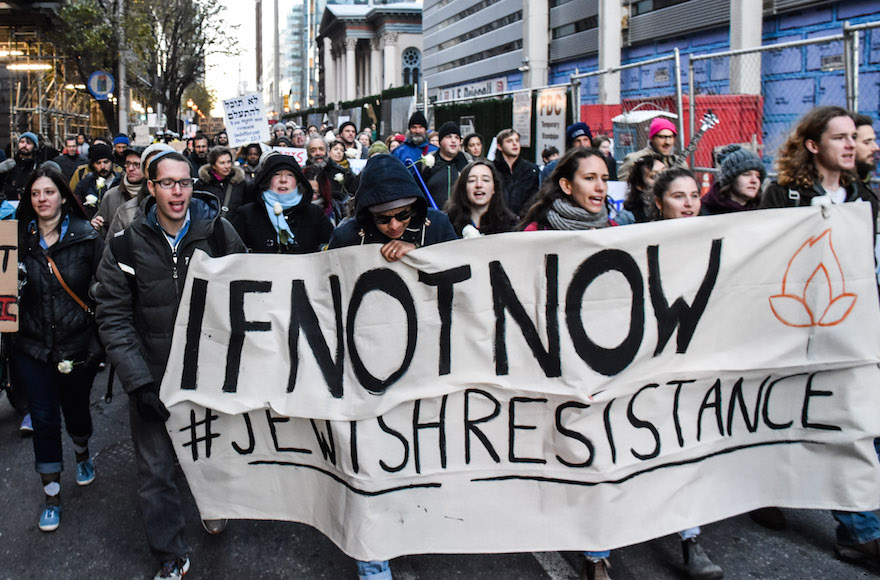 NEW YORK (JTA) — “This Jew says no to white nationalism,” one sign read.

“Silence is akin to consent,” another said, quoting the Talmud.

A third displayed a lyric from a Yiddish song: “We will outlive them.”

The signs, along with chants like “Donald Trump, it’s your fault; Stephen Bannon, oy gevalt!” were not only directed against Bannon, the president-elect’s choice for chief strategist. As hundreds of Jewish protesters marched up Manhattan’s East Side on Nov. 20, they also targeted the Zionist Organization of America, the pro-settlement group that had advertised Bannon’s anticipated presence at its gala that night.

Bannon never showed up at the dinner, but to these protesters that wasn’t the point.

The group that organized the protest, IfNotNow, says the real issue is a disconnect between Jewish institutions and the values of young Jews. Legacy Jewish organizations, IfNotNow activists charge, are so focused on supporting Israeli government policy that they are willing to dismiss other Jewish concerns — like bigotry on Bannon’s former website, Breitbart News.

“This is the inevitable result of pro-Israel-at-any-cost policies,” said Yonah Lieberman, 25, a founding member of IfNotNow. “They are so caught up in their desire to ensure that the U.S. government supports Israel unilaterally that [they’re] willing to sacrifice [their] own values.”

The group takes its name from “If not now, when?,” the end of a statement by Hillel, a first-century rabbi. Founded in the summer of 2014 to organize young Jews opposed to Israel’s war in Gaza, IfNotNow has since evolved into an activist community steeped both in left-wing protest and Jewish tradition. It rails against Israel’s control of the West Bank, the incoming Trump administration and Jewish organizations it accuses of supporting both those things.

Trump’s election has given the group a boost. In November, IfNotNow organized simultaneous demonstrations against Trump and Bannon in 30 cities — dubbed the Day of Jewish Resistance. On Wednesday, the group expects 200 people to attend its protest of a Hanukkah party hosted by the Conference of Presidents of Major American Jewish Organizations and the Embassy of Azerbaijan at Trump International Hotel in Washington, D.C.

Lieberman said nearly 3,000 people have participated in IfNotNow’s recent anti-Trump demonstrations, and 650 have attended activist training sessions the group is holding across the country.

Ending “American Jewish support for the occupation” is the group’s primary goal, although it is light on ideological specifics: IfNotNow takes no position on Zionism, the two-state solution or the movement to boycott, divest from and sanction Israel known as BDS. The neutral stances lead some mainstream leaders to label the group as naive and worse.

“The occupation is a crisis for our entire community,” said Lizzie Horne, 25, a former Hillel International employee who helps organize IfNotNow actions in New York. “Pivoting to focus on some of these Donald Trump appointments is really just recognizing this is a part of the bigger system. There are people and institutions that are willing to forgo certain values as a way of maintaining the occupation.”

What sets IfNotNow apart is its focus on disruptive protest. While some Jewish groups have long preferred quiet dialogue with the powerful over vocal demonstrations, IfNotNow believes that sitting and reasoning with American Jewish leaders won’t get them anywhere.

In April, 17 IfNotNow activists were arrested after staging a sit-in in the lobby of the Anti-Defamation League’s national headquarters to protest the “Jewish establishment’s support of the occupation of Palestine.”

Many Jewish groups, including the ADL, the American Israel Public Affairs Committee and the American Jewish Committee, endorse a two-state solution. Some vocally criticize Israeli actions and explicitly support Palestinian rights, like the dovish J Street.

But IfNotNow accuses the mainstream of empty rhetoric in place of meaningful action.

“In order for us to win, and to end our community’s support for the occupation, we have to get the majority of American Jews on our side,” said Sarah Brammer-Shlay, 25, one of the organizers of Wednesday’s protest. “Doing work primarily in board rooms and meetings, that’s not moving thousands and thousands of people because they’re not seeing that happen.”

But the brash language encouraged by IfNotNow has meant trouble for at least one of its organizers. Simone Zimmerman, one of the group’s activists in 2014, was briefly appointed as director of Jewish outreach for Sen. Bernie Sanders’ Democratic presidential campaign, only to be suspended after it emerged that she had used expletives in a Facebook post about Israeli Prime Minister Benjamin Netanyahu.

If the group’s goal is to consternate large Jewish groups, it is succeeding.

The ADL and the Jewish Federations of North America both offered to meet with IfNotNow and were rebuffed. In April, the ADL lamented in a statement that the group “seems to be more interested in spectacles and ultimatums than in discussion and dialogue.”

Left-wing organizations are friendlier. T’ruah, the rabbinic human rights group, participated in the ZOA protest, and its executive director, Rabbi Jill Jacobs, noted a long history of young Jews staging protests of large Jewish institutions. In a statement, J Street said it shares IfNotNow’s concerns about the occupation and Trump.

IfNotNow isn’t the only anti-occupation Jewish group that has shifted to protesting Trump. J Street has released statements criticizing the president-elect’s domestic policies and appointees. And Jewish Voice for Peace, which supports BDS, has also placed a new emphasis on protesting his statements and policies targeting minorities.

“It’s a new political world and we’ll have to figure it out,” JVP Executive Director Rebecca Vilkomerson told JTA in November. “We’re definitely in conversation on what’s going to need to shift given the Trump presidency.”

IfNotNow activists say the fights against the occupation and Jewish communal acceptance of Trump are one and the same. But beyond any particular issue, some say the group has become a young, left-wing Jewish community for them. In their mission to make the establishment Jewish community uncomfortable, they’ve become comfortable with one another.

“For me, this is a space where I found a home and I could say the things I wanted to say,” Horne said. “It’s one of the most welcoming communities I have ever been a part of.”