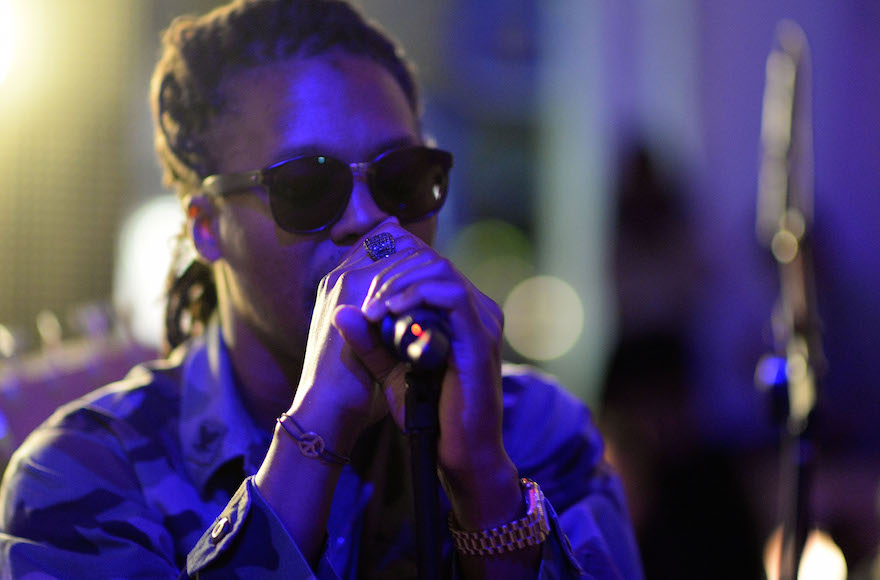 (JTA) — Rapper Lupe Fiasco said he would cancel the album he is working on and stop releasing new music after he was accused of anti-Semitism for referencing “dirty Jewish execs” in a newly released freestyle rap.

The lyrics for the song titled “N.E.R.D.” include “Artists gettin’ robbed for their publishing/By dirty Jewish execs who think that it’s alms from the covenant.”

The Anti-Defamation League condemned the lyrics in a statement released Tuesday, calling them “offensive.”

“These lyrics reinforce the anti-Semitic myth of Jewish control of the music industry, a stereotype that has been exploited in recent years by well-known hatemongers,” said Jonathan Greenblatt, the ADL’s CEO. “It is irresponsible for a recording artist to perpetuate the hateful anti-Semitic stereotype of the ‘greedy Jew.’ Even if Lupe Fiasco has concerns about exploitation of his artistic output, it’s deplorable to stigmatize an entire group in response.”

Greenblatt also said: “Fiasco has a well-earned reputation as a highly respected hip-hop artist. At a time when there are significant divisions across the country, we are disappointed that he has not chosen to use his platform and voice to promote a more inclusive message.”

Fiasco spent hours Tuesday night on Twitter debating with fans whether the lyrics were anti-Semitic, finally declaring in a tweet Wednesday: “I get the hint God. Yo Lupe fans it’s been fun and I hope you’ve had fun. I’m officially not releasing anymore music. Albums cancelled”

I get the hint God.

Yo Lupe fans it's been fun and I hope you've had fun.

He also tweeted: “Getting beat up for telling the truth is not how I plan on spending the rest of life.”

Getting beat up for telling the truth is not how I plan on spending the rest of life.

In the tweets, Fiasco defended calling out Jewish executives, saying the ones that cheated him were in fact Jewish. He also asserted that he studied the Torah and visited Auschwitz, proving he is not anti-Semitic. Later he debated via Twitter with Greenblatt.

Fiasco was due to release three albums this year and has delayed the release of all of them.

He also had announced in 2012 that he was going to retire.