Netanyahu message to Iran: ‘We’re not a rabbit, we’re a tiger’ 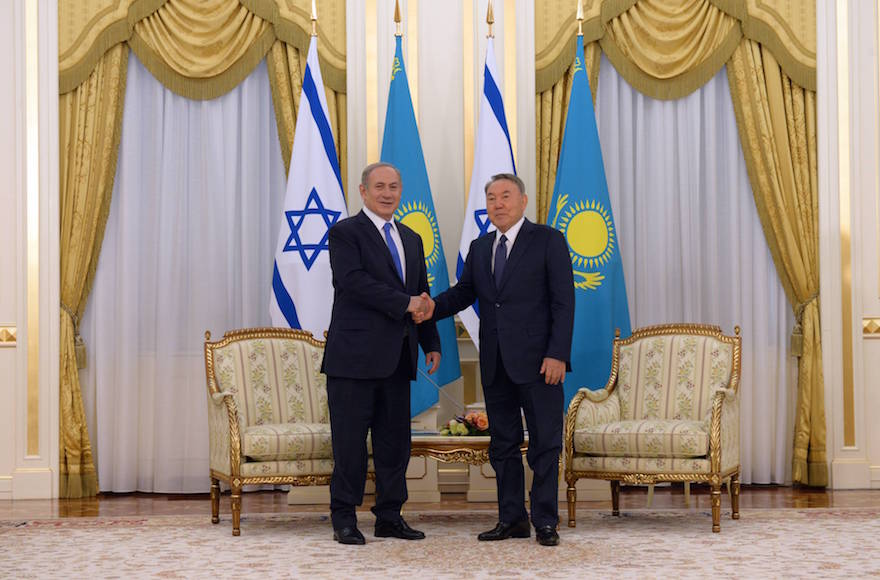 Netanyahu offered the message at the request of the Kazakh president, Nursultan Nazarbayev, at their meeting Wednesday in Astana, the capital. Nazarbayev will meet next week with President Hassan Rouhani of Iran.

It was the first visit to the Muslim-majority Kazakhstan by an Israeli prime minister.

“I want to commend you for your attitude of tolerance towards Jews,” Netanyahu told Nazarbayev during the meeting. “This is something that Jews who are here feel and Jews who came from Kazakhstan to Israel value deeply.”

Netanyahu said the Jews of Kazakhstan are “your best ambassadors.” Estimates of the number of Jews in the country range as high as 30,000.

“They speak very warmly of Kazakhstan and of the attitude towards all religions here,” the Israeli leader said.

He also said: “What you see today are the leaders of a Muslim state and the leader of a Jewish state shaking hands, working to cooperate to create a better future for the citizens of our countries. But I think that this example of Muslim-Jewish cooperation is something that reverberates throughout the world.”

Later Wednesday, Netanyahu and his wife, Sara, visited the Great Synagogue in Astana and attended an event with members of the Jewish community and the local Chabad house.

On Tuesday, Netanyahu met in Azerbaijan with President Ilham Aliyev, his second visit to the country. Netanyahu visited Azerbaijan nearly two decades ago, during his first term as prime minister, when he met with the father of the current leader.

Azerbaijan, a secular state with 98 percent of its population Muslim, has a long border with Iran.