How Hanukkah sufganiyot became a national treat in the Netherlands 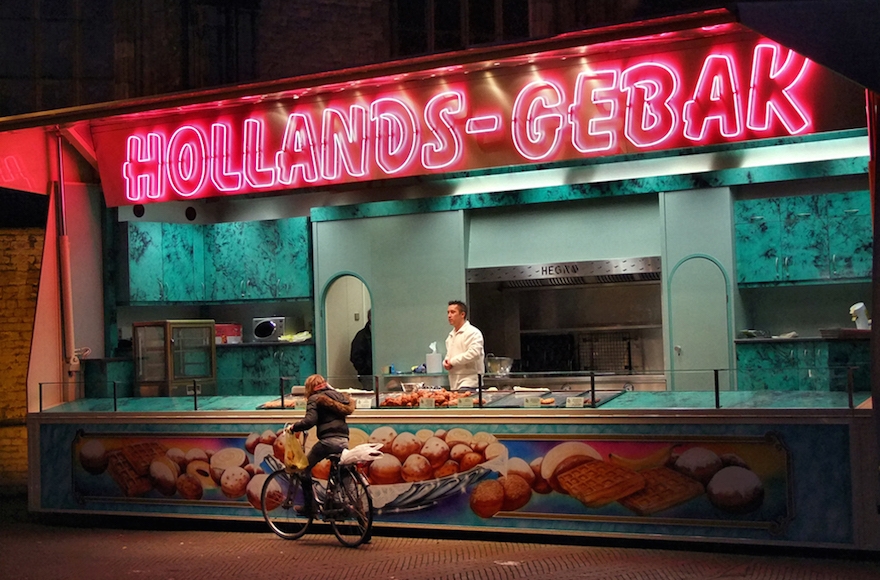 A stall selling oliebollen in Delft, the Netherlands, in 2015. (Gerard Stolk/Flickr)
Advertisement 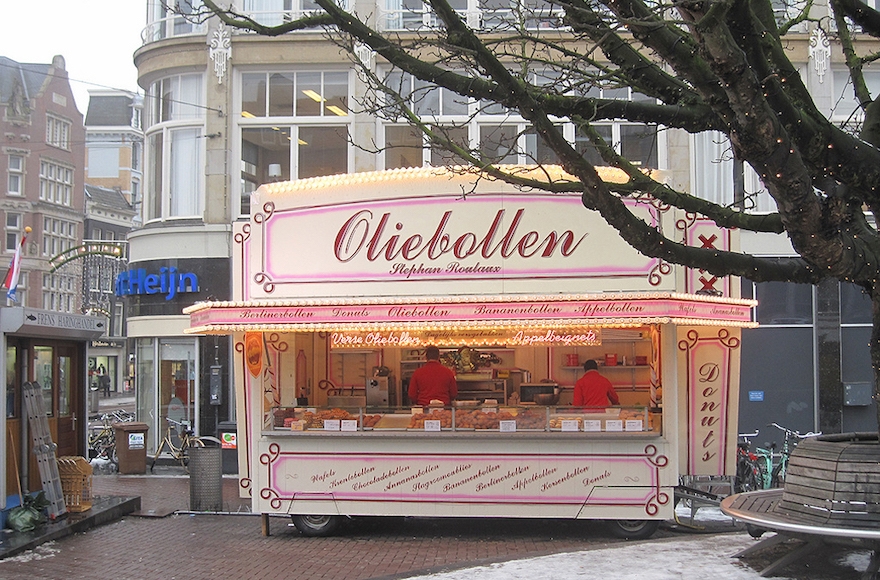 A stall selling oliebollen in Amsterdam in 2015. (Kate Hopkins/Flickr)

AMSTERDAM (JTA) — Though they are considered a caloric hazard in Israel, sufganiyot are a rare Hanukkah treat for many Jews in Europe.

When the holiday arrives, some Jewish communities in Russia, Ukraine and beyond arrange special community bakes. This keeps schools and kindergartens in supply of the jam-filled doughnuts that Jews deep-fry on Hanukkah in celebration of the legend involving the miraculous use of oil during the Maccabean revolt. Other communities arrange for shipments from Israel or buy the delicacy in the few kosher shops that sell them across the continent.

But for Jews in the Netherlands, sufganiyot are a predictable dietary assault. Each winter they become as ubiquitous here as they are in Israel thanks to hundreds of food stalls across the country that sell a pastry known as “oliebollen,” or “oil bulbs,” every year from November to January. Prepared with raisins or without, oliebollen are usually sold with powdered sugar on top.

“I often don’t bother to get real sufganiyot at a kosher shop,” said Tzippy Harmsen-Seffy, an Israel-born Dutch Jew from Amsterdam. “I just pick up a few oliebollen instead.”

Whereas many cultures have sweet pastries made of deep-fried dough – including the German Berliner, which unlike oliebollen is eaten year-round and has sweet filling — few resemble sufganiyot quite as closely as oliebollen in terms of ingredients, recipe and the period of the year when they are traditionally consumed.

These similarities are not necessarily the result of coincidence, according to Jonah Freud, who published a book in 2012 about the Dutch Jewish cuisine based on her research for the Jewish Historical Museum of Amsterdam.

Like several other food historians in the Netherlands, Freud believes the current tradition of the oliebollen, which dates back to the late Middle Ages, may be rooted in the Jewish sufganiyah, which is likelier an older dish and is mentioned in Jewish sources even prior to the 13th century.

While it would be difficult to credit with certainty any one cuisine for “a basic recipe of flour, yeast, eggs, water and oil,” she said, “there are nonetheless some influences in the oliebol that can likely be attributed to Jewish traditions.”

A stall selling oliebollen in Delft, the Netherlands, in 2015. (Gerard Stolk/Flickr)

One clue are early recipes for oliebollen from the Middle Ages, which have the dough fried in pig’s fat.

“Jews would have likely swapped the pig’s fat for oil because pork isn’t kosher,” Freud said. “Eventually we ended up with the kosher variant, whereas no one fries oliebollen in pig fat today.”

Another indication is the seasonal correlation between Hanukkah and oliebollen season. Oliebollen, Jonah noted, are not associated with Christmas.

“It’s a seasonal food, not a holiday food,” she said.

This is significant, food historians agree, because Dutch Christians probably would have been careful not to co-opt any Jewish customs into their own religious rituals.

To be sure, there are competing theories about the origins of the oliebol, including that it was invented by Germanic tribes in the Netherlands during Yule, a pagan winter holiday.

But if the Dutch oliebol does have Jewish roots, it would not be the first typical Dutch food with such origins.

The Jews of Amsterdam — a city so well-known for its Jewish history that it is also known as “mokum,” the Yiddish word for “place” — are widely credited for giving the Dutch capital its signature halfom sandwich, which consists of liver and corned beef. Before the Holocaust, some 140,000 Jews lived in the Netherlands, mostly in Amsterdam. Seventy-five percent of them were murdered.

There is additional circumstantial evidence connecting the oliebol to the history of the sufganiyah.

Jewish food historians believe the habit of injecting a sweet filling into the sufganiyah is a late influence that Ashkenazi Jews either invented or picked up in Germany, where bakeries for centuries have been selling the Berliner, a pastry that looks and tastes like the sufganiyot sold in Israel today.

But the sufganiyot mentioned in Sephardic Jewish writings — including by Rabbi Maimon Ben Yossef, the father of the 13th-century philosopher Maimonides — had no fillings. Those are believed to have come later, as Ashkenazi and Sephardic Jews mixed in the Diaspora, including in Poland.

But to this day, some Sephardim in Israel, France and Morocco spurn the jam filling that for many is the trademark of a good, traditional sufganiyah.

Jonah said this gives credence to theories that oliebollen in their current form were brought to the Netherlands by Portuguese Sephardim who came here from the 15th century onward to escape religious persecution in the Iberian peninsula. Another indication: Dutch oliebol is often made with raisins, an ingredient that does not feature heavily in Dutch cuisine but was commonly used by Portuguese Jews.

Many non-Jews in the Netherlands believe oliebollen are originally a Sephardic or Portuguese dish – a history they regard as common knowledge, even though it has never been proven.

“I think it came from Portugal, Portuguese people brought it,” said Jan van Gelden, an Amsterdam entrepreneur who on Thursday bought eight oliebollen at a stall in Amsterdam’s Museum Square intended for the construction workers who were wrapping up renovations outside his office.

In Jewish circles, some oliebollen lovers here even insist they are superior to sufganiyot — and closer to the treat’s Sephardic origins.

“If you consider Israeli store-bought sufganiyot original, then oliebollen are better because they’re fresher and smaller,” said Gili Gurel, another Israel-born Jewish resident of the Netherlands.

But, she added, compared to her grandmother’s recipe for homemade sufganiyot, “everything is inferior.”