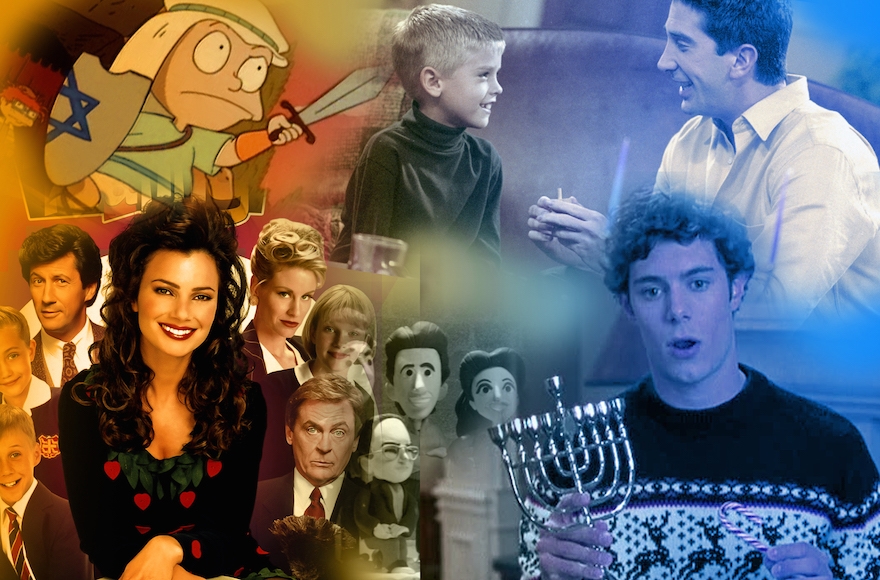 A collage of some of the best Hanukkah-themed TV episodes ever. (Lior Zaltzman)
Advertisement

(JTA) — ‘Tis the season of TV Christmas specials! The drama, the intrigue, your favorite TV characters in ill-fitting Santa costumes — the Christmas special has been a popular trope on American TV.

Unfortunately, one cannot say the same for Hanukkah, which this year starts on Dec. 24 — yep, Christmas Eve. It’s very hard to find convincing TV portrayals of the Jewish winter festival — which is a shame because this writer humbly believes it could be source of some great TV moments.

Imagine if you will the cast of “Grey’s Anatomy” playing a dramatic game of dreidel before a Hanukkah eve surgery, or the cast of the “Big Bang Theory” arguing over a spread of delicious fried foods. Or even a cathartic menorah lighting after a gory battle in an episode of “Game of Thrones.” OK, OK — maybe the last one is a little ridiculous.

Nevertheless, these eight TV series managed to get Hanukkah right — or, at least, almost right.

Let’s hope that by next Hanukkah, this list grows even bigger. (I’m looking at you “Crazy Ex-Girlfriend” and “Transparent.”) In the meantime, get in the Festival of Lights spirit and check out one — or all eight — of these fun TV shows.

Before he went on to create “Gossip Girl,” a twentysomething Josh Schwartz gave a serious nod to his Jewish upbringing with this California-based teen drama. The show, which focuses on the Cohens — a family with a Jewish patriarch and a WASPy matriarch — popularized the term “Chrismukkah” (a combination of Christmas and Hanukkah for those of you who didn’t know). Seth Cohen, played by Adam Brody, explains that he invented the “the greatest superholiday known to mankind” when he was 6 years old. During its four seasons, “The O.C” had a yearly Chrismukkah episode.

It’s easy to forget that many of the characters in the hit TV comedy “Friends” are actually Jewish (Ross, Monica and possibly Rachel), but in this episode, Ross, played by David Schwimmer, tries to get his young son excited about Hanukkah by dressing up like the “Holiday Armadillo” and telling him the story of Hanukkah. Why an armadillo? We’re not sure. Especially because armadillos aren’t kosher (and probably shouldn’t be eaten at all). But one thing we do know is that Schwimmer looking adorable in his armadillo suit sure gets us in a festive mood.

While it never really portrayed a Hanukkah celebration, “Saturday Night Live” has had fun with the Jewish holiday on several occasions.

First, there’s the legendary Hanukkah Harry, savior of Christmas, which as SNL said was brought to us by “Hallmark Cards and the Anti-Defamation League.” Jon Lovitz is delightful in this classic sketch.

Then, of course, there is Adam Sandler’s “Hanukkah Song,” the smash hit that helped remind Jews with Christmas envy of all the awesome celebrities that celebrate Hanukkah along with them. It’s a nostalgic reminder of the days when Sandler was a less controversial Jewish comedian.

And while “Christmas Time for the Jews” is not exactly a Hanukkah sketch, it may be the best Jewish-themed SNL sketch ever, reveling in the free reign that Jews have across the land while the rest of the country is busy celebrating Christmas.

The beloved ’90s cartoon about a group of gregarious and highly imaginative toddlers had two Jewish specials — for Passover and Hanukkah. The latter is adorable — and notable, too, for giving King Antiochus the nickname the “Meanie of Chanukah.” Unfortunately, the Anti-Defamation League wasn’t charmed by the portrayal of Grandpa Boris and Grandma Minka, who they claimed looked like anti-Semitic cartoons. Eventually, after Abe Foxman complained about a portrayal of Boris in a comic strip in 1998, Nickelodeon decided to stop producing comics or illustrations with the character.

However, this charming Hanukkah episode remains one of the most captivating portrayals of Jewish holidays in American cartoons.

Oh, how we miss Fran Drescher! It’s hard not to love this classic sitcom about the flamboyantly dressed, nasal-voiced Fran Fine, a Jewish nanny from Queens who is hired to care for three high-society New York kids and ends up falling for their somewhat uptight and charming British dad. The show had its Hanukkah episode deep into its sixth and final season. Early on, Fran is asked, “Why do all the Jewish holidays start at sundown?”

She answers in her usual Nanny fashion: “That’s because God realized that before 5 p.m., to wear sequins is gauche.”

The episode features adorable flashbacks of Fran as a kid, including a serendipitous meeting with a young Mr. Sheffield, a menorah lighting and, funnily enough, a nun.

Did you know this underrated TV drama starring Calista Flockhart, Sally Fields and Rob Lowe was actually about a Jewish family? Well, to be fair, the showrunners did a pretty good job at ignoring that until the 10th episode of season 1 (the show ran for five seasons).

After a conversation in class with a Jewish classmate, the young granddaughter of the Walker family suddenly realizes both her grandmother and mother are Jewish, and therefore — spoiler alert! — so is she. When she asks her grandmother why they never celebrate Hanukkah, the Sally Fields character answers: “You can ethnically be Jewish, but at the same time, Santa is so much fun.”

The episode features a Hanukkah feast and, of course, ends with a moving and cathartic candle lighting, which is an underused trope on TV. (Just saying.)

It seems unfair not to address one of the only shows still airing on TV that is actually, you know, about a Jewish family. “The Goldbergs” perfectly addresses the Christmas envy that is rampant among Jews in American suburbia with this episode called “A Christmas Story.” The family matriarch, Beverly, attempts to get her family enthused about Hanukkah by inventing “Super Hanukkah,” which when you hear about the holiday sounds a lot like … Well, see for yourself.

Incidentally, this year, “The Goldbergs” premiered their second Hanukkah-themed episode, and this time it’s all about Star Wars (celebrating the new Star Wars prequel, “Rogue One,” no doubt). The punny name for the December 14 episode is ““Han Ukkah Solo.”

It’s hard to watch this show featuring a young Shia LaBeouf without thinking about all the controversy the actor would become embroiled in. Yet this family-friendly sitcom about the California-based, somewhat dysfunctional Stevens family, whose matriarch is Jewish, features a sweet Hanukkah episode. Louis Stevens, played by the then-innocent LaBeouf, is grounded after finding and opening all his Hanukkah gifts without permission. Louis is upset about ruining Hanukkah, and what follows is a charming re-enactment of “It’s a Wonderful Life” featuring the ghost of Louis’ great-great-great-great-grandmother, Bubbe Rose. It’s adorable and heartwarming and a nostalgic reminder of simpler days.