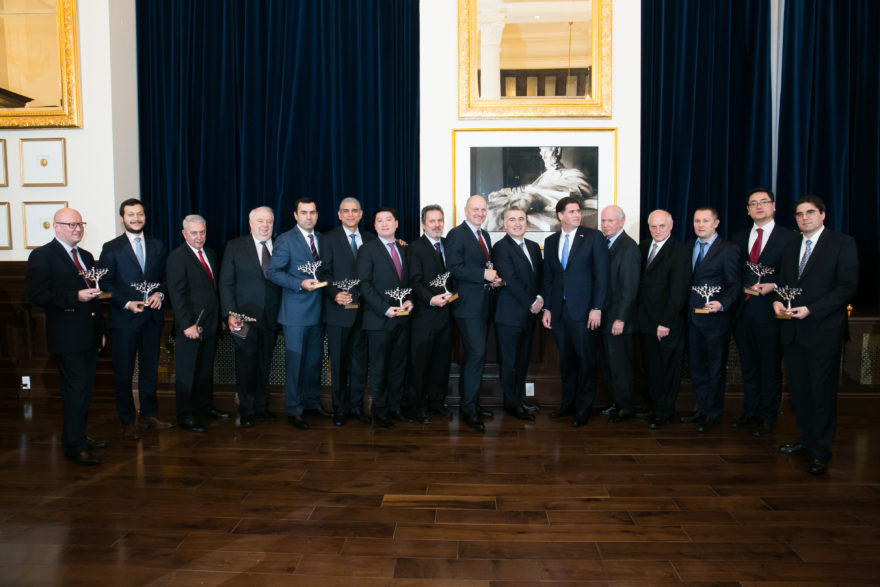 Add this to the ironies: When eight or so Jewish organizations dropped out of a Hanukkah party this year because of its associations with President-elect Donald Trump, ambassadors from Muslim countries replaced them.

For all the laughs packed into Wednesday’s marathon of D.C. Hanukkah celebrations, there was also earnestness: a loving, if mournful, farewell delivered by President Barack Obama and his wife, Michelle, to the Jewish community.

A few blocks away, the Conference of Presidents of Major American Jewish Organizations and the Azerbaijan Embassy co-hosted a Hanukkah party at the Trump International Hotel.

Eight liberal Jewish groups said they would not attend the event because of its associations with Trump, some citing his broadsides against Muslims, Mexicans and other groups, and others questioning the propriety of making payments to a business owned by the incoming president. Some groups also objected to the association with Azerbaijan, an autocracy that scores low on the human rights index even as it becomes more friendly with Israel. Another three or four centrist groups did not attend, they said, because of scheduling conflicts. (The rancor over the venue was item No. 1 on the agenda of a Presidents Conference meeting in New York the evening previous, sources told JTA.)

That didn’t diminish the holiday spirit, according to folks we spoke to who attended: Every seat was filled, and Malcolm Hoenlein, the Presidents Conference’s executive vice president, presented 13 envoys – including seven from Muslim majority nations – with commemorative menorahs for the assistance by their countries in putting out last month’s devastating forest fires in Israel.

“Not can we only light candles together, we can douse flames together, and the fact that all of you represent countries who in our hour of need were there for us is deeply appreciated, and I want to thank each and every one of you for doing that,” said Israel’s ambassador to the U.S., Ron Dermer.

One remarkable presence among the honorees, given the near total breakdown in Israeli-Palestinian Authority relations, was Maen Areikat, the Palestine Liberation Organization envoy. The P.A. assisted in putting out the fires.

The event, participants told me (it was closed to the media), had the air of the incoming administration. Among those attending were Elliott Abrams, the former senior national security counselor in both Bush administrations who reportedly is under serious consideration for a deputy secretary spot at the State or Defense departments in the incoming Trump administration.

The groups on hand leaned more hawkish on foreign policy, particularly on Israel: the American Israel Public Affairs Committee, B’nai B’rith International, the Middle East Forum, the Zionist Organization of America and the Jewish Institute for National Security Affairs. The National Coalition Supporting Eurasian Jewry was also present, having close relationships with some of the embassies represented.

“It had a good turnout, but it was pretty obvious which organizations weren’t there,” said Shai Franklin, a veteran Jewish insider who attended. “There were not a lot of liberal Jews there.”

Edwin Black, an author who in recent years has investigated liberal nonprofits critical of Israel, said the Trump hotel event was “historic” and chided those who were not present. The event “strengthened the visible and growing ties between Israel and many Muslim countries,” said Black, who posed for a selfie with Areikat. 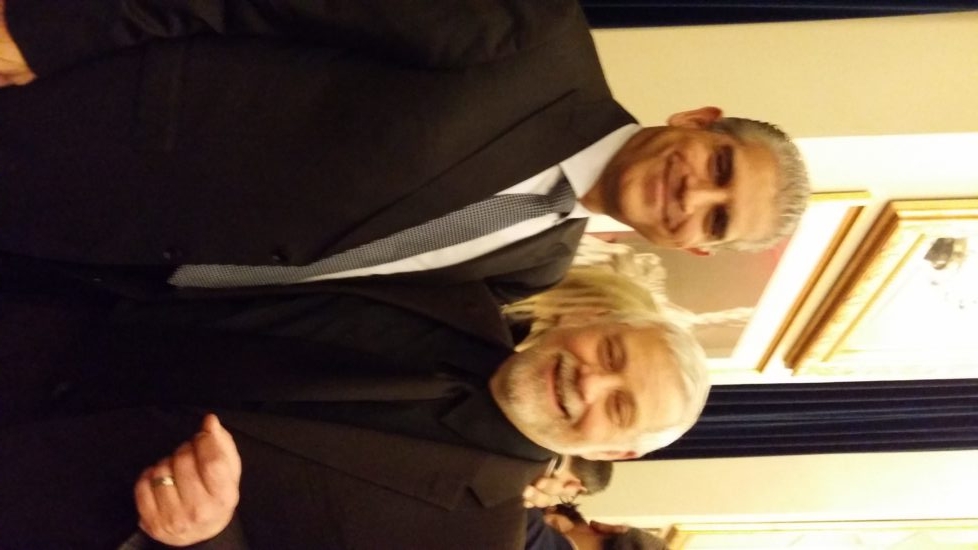 Author Edwin Black, right, poses for a selfie with PLO envoy Maen Areikat at a Hanukkah party at the Trump International Hotel in Washington, D.C., Dec. 14, 2016. (Courtesy of Edwin Black)

Dermer in his remarks tipped his hat to the venue in an allusion to Trump’s campaign slogan, “Make America Great Again”: Hanukkah, he explained, commemorates a period that “made Jews proud again.”

Clever slogans abounded as well outside the hotel, where about 200 demonstrators joined a protest of the event by IfNotNow, the mostly millennial group that in recent years has arisen to claim that the establishment Jewish agenda does not reflect the community, and especially its younger members.

“Worst Hanukkah Party Ever,” said one placard, and “We want none of Trump’s hate” – with the word “none” represented by the Hebrew letter “nun” on the side of a dreidel.

There was also a small contingent – about a dozen or so folks — from a group calling itself Jews Choose Trump. Both sides, armed with megaphones, sang dueling Hanukkah songs. 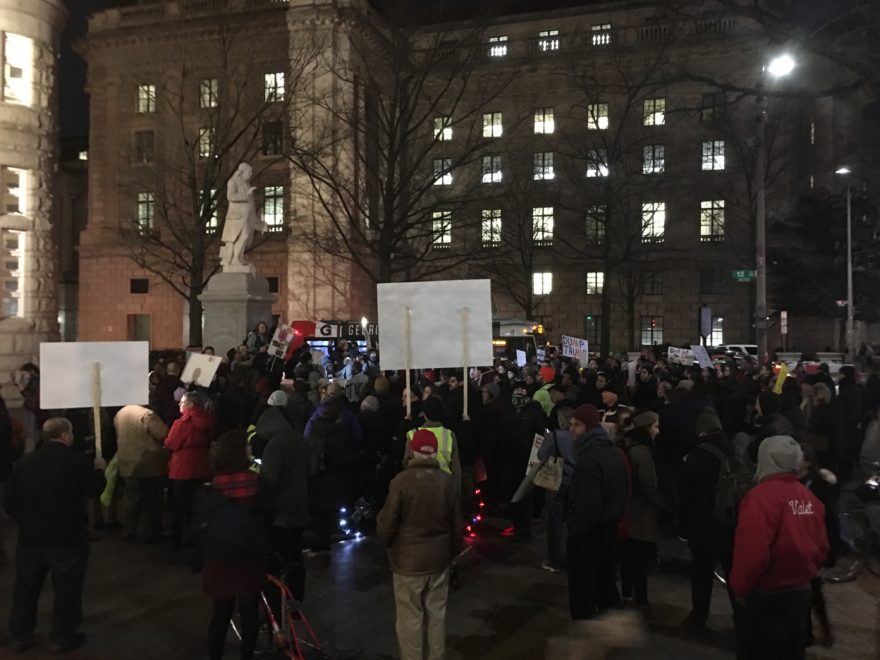 IfNotNow protesters outside the Trump International Hotel demonstrating against a Hanukkah party co-hosted by the Conference of Presidents of Major American Jewish Organizations, Dec. 14, 2016. (Ron Kampeas)

I hope you never have to live through a battle of Hanukkah songs, but having done so, I can tell you, the leftists won. They rendered almost tuneful renditions of “Esh Tamid Tukad Al HaMizbah LoTichbeh,” (“The Eternal Flame”) and “Sura Hoshech, Halaa Shachor” (“Begone Darkness”).

The Trump International Hotel is a block or so from the White House – at the corner of 14th and Pennsylvania — and the Presidents Conference/Azerbaijan Embassy party was timed in part so guests could attend the festivities at both venues. (The Obamas will be in Hawaii during Christmas break, hence the party predating the actual holiday by 10 days.)

But there wasn’t much crossover – Dermer and the Presidents Conference chiefs, as well as AIPAC officials, were present at both events. So was Rabbi Levi Shemtov, the president of American Friends of Lubavitch, who koshered the White House kitchen ahead of the party. That was pretty much it.

Which perhaps was appropriate: Shifting the mood from the White House (morose and sentimental) to the Trump Hotel (upbeat and expectant) might have been too jarring by half.

The day started with special White House briefings for those in attendance on the robust health of the U.S.-Israel security relationship.

The panels were off the record, but I’m not giving anything away to say that the tone was one of defiant woundedness – of an administration and its supporters who wondered why the closeness between security establishments never supplanted the tensions between Obama and Israeli Prime Minister Benjamin Netanyahu as the preeminent narrative.

Obama was rushed by adoring fans at both receptions, with many lamentations about how this would be the last chance to introduce their families to a president they admire. 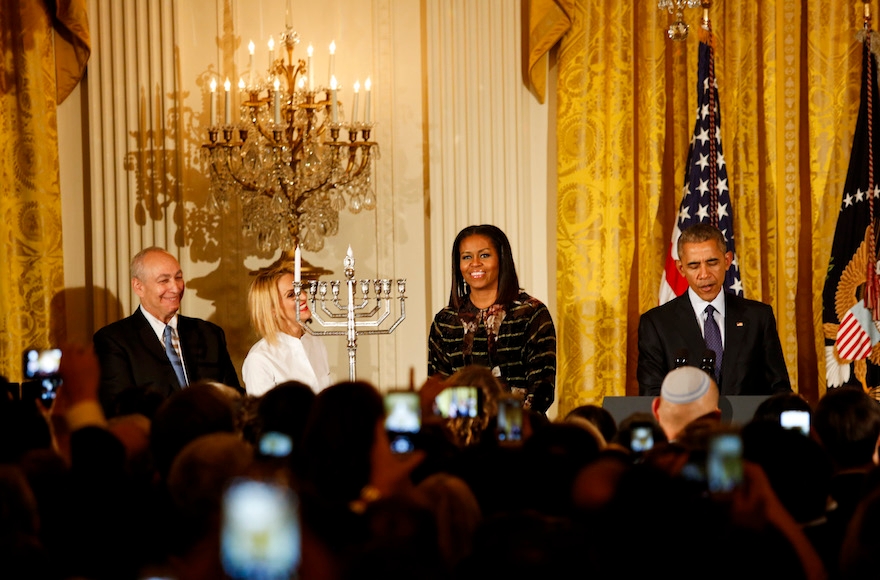 A White House staffer eagerly guided guests to a display about the letter George Washington wrote to the Jewish community of Rhode Island pledging religious tolerance. Obama read from the letter at the evening reception, and implied a rebuke of Trump’s campaign call for a ban on Muslims entering the United States: “Washington assured the Jews of Newport, Rhode Island, that the United States ‘gives to bigotry no sanction, to persecution no assistance,'” he said to applause. “He went on to write that all that is required of those ‘who live under [the nation’s] protection’ is that they be ‘good citizens.’”

The president thanked his Jewish guests and said, “The story of this community and the work you continue to do to repair the world forever reminds us to have faith that there are brighter days ahead.”

There was some jaded laughter and Michelle Obama interjected, “They’re a little cynical.”

Obama rejoined, “No, no, no, they’re not cynical.”

Six years ago, at the inaugural White House Jewish American Heritage Month reception, Obama celebrated Jewish heroes and celebrities who, to me and other observers, defied Jewish stereotypes, including athletes, military figures and astronauts.

Now, on his way out, he honored the memories of Elie Wiesel, the Holocaust memoirist and Nobel Peace Prize laureate, and Shimon Peres, an Israeli founding father.

By honoring them and inviting their families, Obama seemed to have internalized that Jews were not simply American and that their history stretches back millennia, through unimaginable loss, across the globe, and into a difficult nation state. And he emphasized the idea that friends don’t always agree — indeed, Obama at times had a contentious relationship with Wiesel, who opposed the president’s Iran policies.

At the afternoon reception, describing the menorah designed by Wiesel’s young granddaughter, Obama said, “It’s got bolts and tiles and glue, and it looks like some balsa wood.”

Obama smiled. “Over the years, your grandfather also corrected me several times,” he said. “And it was always very helpful.” 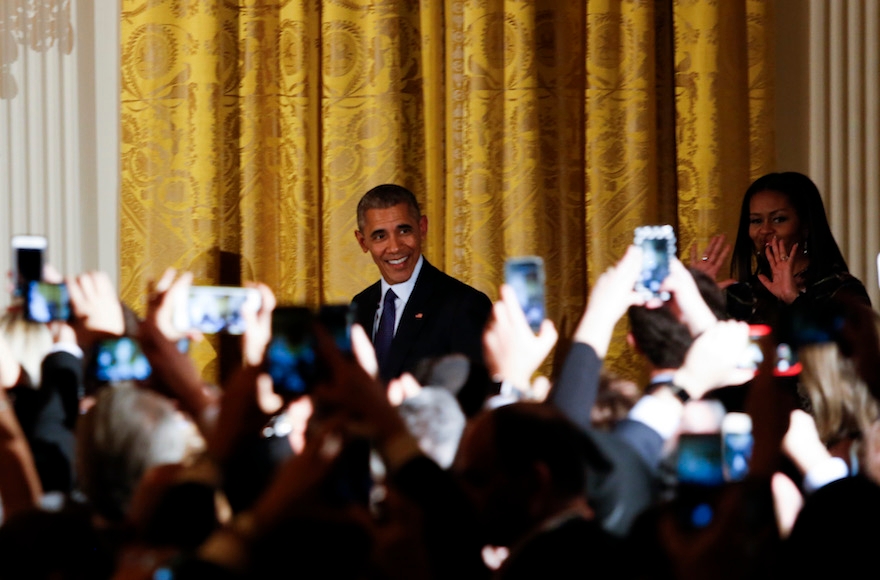