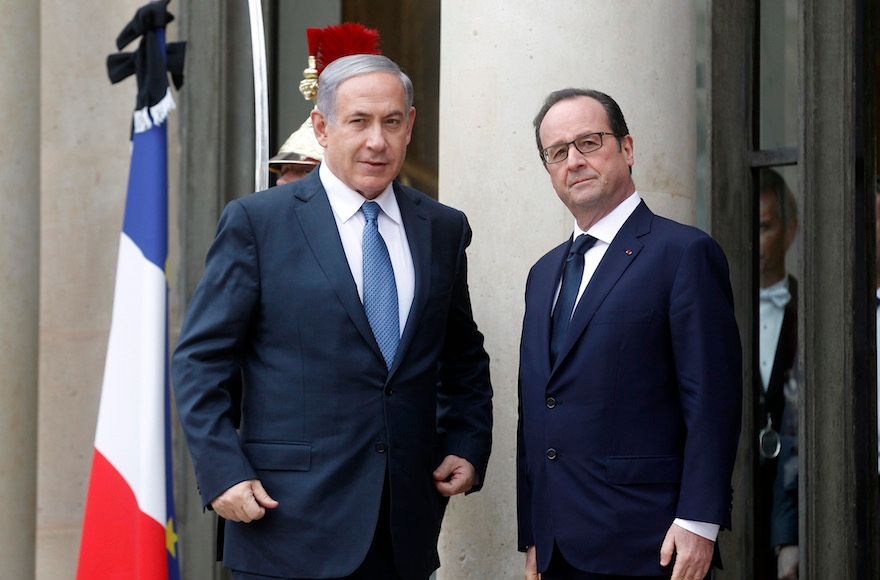 (JTA) — France has postponed a planned international peace conference in Paris until January.

The meeting of foreign ministers as part of the Paris peace initiative had originally been scheduled to be held in Paris on Dec. 21. It was to be a follow up of a similar meeting was held in Paris in June. Neither Israeli nor Palestinian representatives were invited to that meeting.

“After nearly a year of efforts, France will hold during January an international conference bringing together all the states attached to (seeking) peace,” French Ambassador to the United Nations Francois Delattre said Saturday in a statement issued by the country’s foreign ministry, Reuters reported. Rumors that the conference would be postponed circulated earlier in the week.

France hopes to gather the foreign ministers of up to 50 countries for the conference. It is not clear if the conference will take place before the end of U.S. President Barack Obama’s time in office on January 20.

“Everyone knows that only the Israelis and Palestinians will be able to conclude a peace directly, but we have to recognize today that the conditions are not in place today to restart the negotiations,” he also said.

The June meeting ended with a final statement calling on the Palestinians and Israelis to demonstrate “a genuine commitment to the two-state solution in order to rebuild trust.” It also proposed an international conference to further talks by the end of the year.

Israel has dismissed the summit as doomed because it does not involve direct talks between Israelis and Palestinians.

Israeli Prime Minister Benjamin Netanyahu told French President Francois Hollande earlier this month that Israel would not attend the conference, but that he was open to meeting with Abbas “for direct talks without preconditions” if France cancels the summit.

Hollande announced earlier this month that he will not run for reelection in France’s 2017 elections.