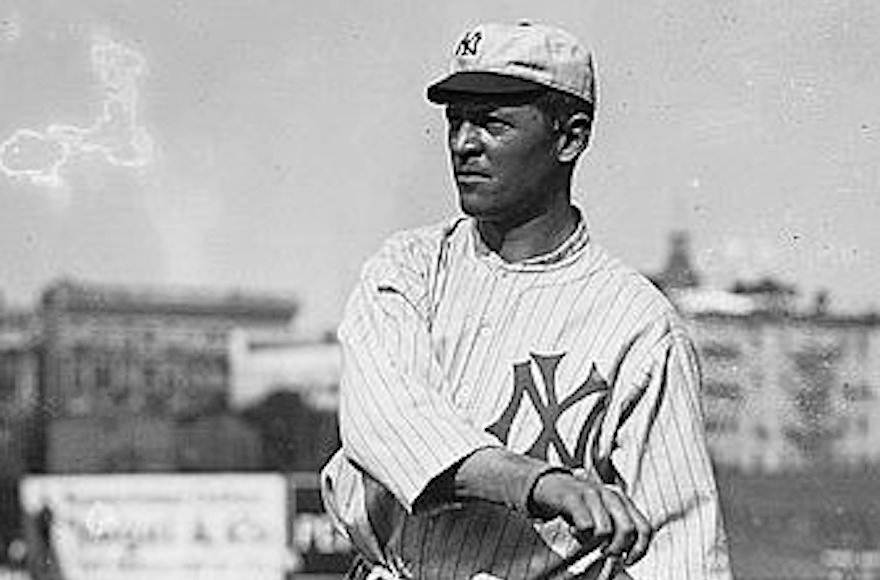 Even if you’re a baseball history buff, you’ve probably never come across the name Guy Zinn. The major league outfielder played only five seasons between 1911 and 1915 for teams in New York, Boston and Baltimore and compiled a very ordinary .269 career batting average (to be fair, it’s worth noting that he was the first ever batter in Fenway Park and one of only 11 players to ever steal home twice in one game).

But as a recent New York Times report explains, even a player as insignificant as Zinn can be the focus of a six-figure squabble among collectors — especially if that player is Jewish.

A rare card of Zinn is now pitting against each other two big collectors — Jeff Aeder, founder of the online Jewish Baseball Museum, and Dan McKee, who told the Times the worth of his collection is “too valuable to admit to.”

McKee owns the card, which he bought in 1995 for $2,500. He was not aware that Zinn was Jewish and finds the card valuable because it is a rare “schedule-back,” meaning it contains his team’s entire season schedule on its back. The card — which also happens to be the first ever of Zinn — appeared as an insert in a 1914 edition of The Baltimore News.

In 2014, Aeder made a bid for the card for an entirely different reason: simply because Zinn was Jewish. Aeder is a Chicago real estate developer and the philanthropist behind projects such as Milt’s Barbecue for the Perplexed, a kosher Chicago restaurant that donates its profits to charity. As he told JTA in March, he is “fairly obsessive” about his baseball collection and owns around 2,500 pre-1990 Jewish baseball cards (in addition to 2,000 pieces of other Jewish baseball memorabilia). He sees his comprehensive Jewish Baseball Museum site —which includes interviews with figures such as former MLB Commissioner Bud Selig and articles by Jewish sports writers, along with a catalogue of his extensive collection — as an opportunity to introduce the stories of older Jewish ballplayers to younger generations.

Aeder was prepared to buy McKee’s card for $125,000 — a price that he told the Times was the “most overblown, crazy valuation of all time.” McKee says he lists his items for sale at very high prices because he hates parting with them (he first listed it on eBay for $250,000). Still, Aeder was irrationally drawn to it.

But when Aeder asked McKee to have the card authenticated, the deal fell apart. The Sportscard Guaranty Company gave it a one out of 10 rating for its crease and loss of paper on its back side. McKee insisted that its physical condition was secondary to its rare status, but Aeder disagreed. The two have ceased talking to each other.

They both hope that another Zinn schedule-back card (presumably from the same Baltimore News printing) shows up soon.

“I have hopes that there’s plenty more of those out there,” McKee told the Times. “That I’m going to find.”