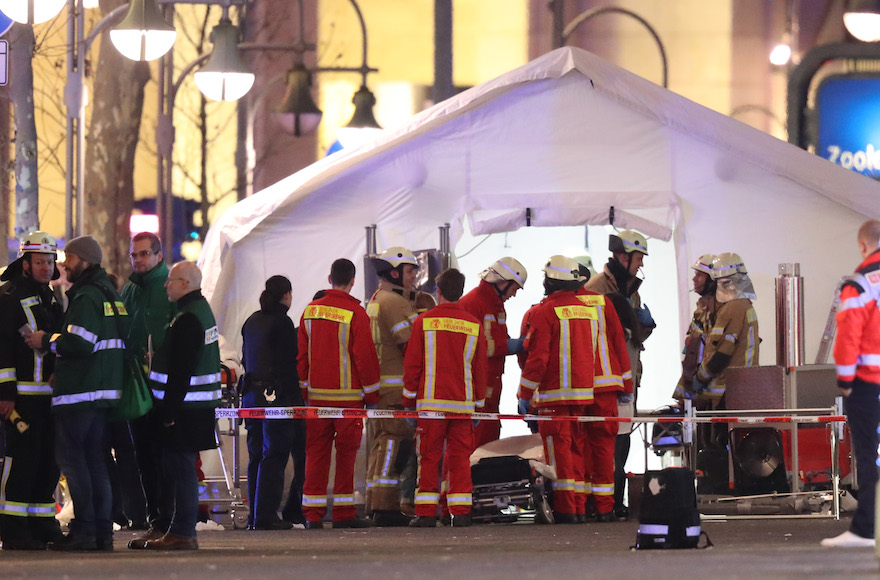 Rescue workers outside a tent in the area after a lorry truck ploughed through a Christmas market in Berlin, Dec. 19, 2016. (Sean Gallup/Getty Images)
Advertisement

(JTA) — The chief rabbi of France, Haim Korsia, offered condolences to the people of Germany following an apparent terrorist attack in Berlin.

At least nine people died and dozens were wounded in the incident Monday evening, which police representatives in Berlin said was likely a “deliberate attack.” It involved a truck that hit pedestrians at a Christmas market at the Berlin square of Breitscheidplatz outside Kaiser Wilhelm Memorial Church, the Associated Press reported.

In July, more than 80 people died and hundreds were wounded in similar circumstances in Nice, France, where an Islamist drove a truck through a crowd of people on a busy promenade.

“With all my heart with the people of Berlin and all the people of Germany,” French Chief Rabbi Haim Korsia wrote on Twitter. “My prayers accompany you,” he wrote, adding the hashtags #Berlin, #Breitscheidplatz and  “#ichbineinBerliner” —  a quote which means “I am a Berliner” from  a 1963 speech by U.S. President John F. Kennedy in West Berlin.

After the July 14 incident in Nice, the Islamic State terror group claimed that the attacker, Mohamed Lahouaiej Bouhlel, was one of its “soldiers.”

Footage from the scene of the incident in Berlin showed the black truck with its front end wedged between the market stalls amid upturned boxes and crates.

Last month the U.S. Department of State warned travelers that there is a heightened risk of terrorist attacks throughout Europe during the holiday season.

The Department of State wrote on their website: “U.S. citizens should exercise caution at holiday festivals, events and outdoor markets.”

In recent months, Western European intelligence agencies added some churches to list of at-risk locales which for years have included synagogues and other Jewish institutions.

In July, two assailants who had pledged allegiance to the Islamic State killed a priest during an attack in a church in Saint-Etienne-du-Rouvray, a suburb of Rouen about 65 miles northwest of Paris. They shouted “Allahu Akbar,” or “God is great” in Arabic, before slitting the priest’s throat, according to reports.

In 2012, a jihadist killed four Jews, a rabbi and three children, at a Jewish school in Toulouse. In 2014, four people were murdered at the Jewish Museum of Belgium, in what Belgian prosecutors said was a terrorist attack perpetrated by the French Islamist Mehdi Nemmouche. He has denied the charges and is standing trial in Belgium. And last year, four Jews were killed in a jihadist’s attack on a kosher supermarket in Paris.