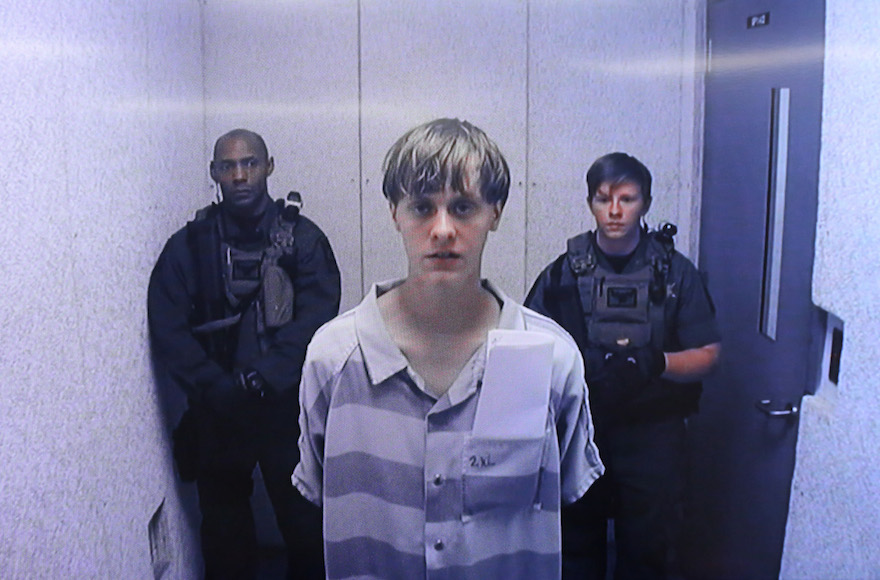 (JTA) — Dylann Roof, who considers psychology a “Jewish invention,” said he will not ask jurors to consider his mental health when they decide whether or not to sentence him to the death penalty for the murders of nine black worshipers at a Charleston, South Carolina church.

Roof, 22, who is acting as his own attorney during the penalty phase of the trial, said in a handwritten note to the court that he “will not be calling mental health experts or presenting mental health evidence.”

While the note did not specify the reason, his journal, filed with racist and anti-Semitic rants, which was introduced as evidence during the trial, says he considers psychology a “Jewish invention.”

“It is a Jewish invention and does nothing but invent diseases and tell people they have problems when they don’t,” Roof wrote, according to reports including from the Associated Press.

Roof, who is white, was convicted on Thursday of 33 charges of federal hate crimes in the 2015 massacre of African-American worshipers at the Emanuel African Methodist Episcopal Church. A separate trial on state charges in the nine killings in the church shootings is scheduled for next year.

In a 2,500-word racial manifesto published on a website that was registered in his name, Roof said that the Jewish “problem” would be solved “if we could somehow destroy the Jewish identity.” The website was blocked shortly after the shootings.

Roof devotes most of the manifesto to a discussion of blacks, who he calls “the biggest problem for Americans,” and who he says are “stupid and violent.” He discusses segregation — Roof said it “was not a bad thing. It was a defensive measure” — as well as slavery, the flight to the suburbs and racial mixing.

Roof calls Jews an “enigma,” adding, “I don’t pretend to understand why jews [sic] do what they do.” He said he believes that “the majority of American and European jews are White.”