Married couple to face off in major Bible contest in Jerusalem 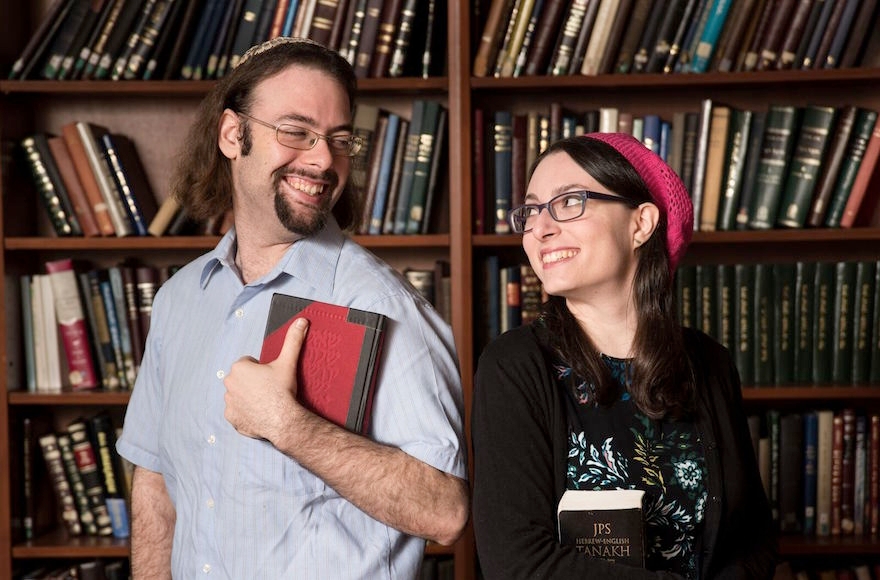 Yair Shahak, left, and Yaelle Frohlich, are married. They are also competing against each other in the International Adult Bible Contest in Jerusalem on Dec. 28, 2016. (David Khabinsky/Yeshiva University)
Advertisement

NEW YORK (JTA) — Some couples argue over movies, others disagree about how to squeeze the toothpaste.

But one of the earliest debates Yaelle Frohlich and Yair Shahak had was over which biblical figure was the most tragic. Shahak chose Jeremiah, the ridiculed and ignored prophet of doom. Frohlich picked Leah, Jacob’s neglected wife.

Nine years later, on a chilly Monday night in Manhattan, the couple sat in the library at Yeshiva University engaged in another spirited discussion — this time about Samson, the tragic hero in the Book of Judges.

“You do not fall in love with a Philistine woman and tell her all your secrets after you killed a thousand Philistines!” Frohlich exclaimed, Shahak nodding in agreement. “That’s just ridiculous!”

Frohlich and Shahak, both 28 and living in Manhattan, met in 2007 when they were studying at Y.U. They soon bonded over their mutual love of the Bible. The couple married in 2012, and since then have spent many Saturdays together poring over prophetic texts or reading verses aloud to each other.

Recently they’ve been quizzing each other on the Bible’s obscure details. That’s because next week, Frohlich and Shahak will each be one of two people representing their respective countries — Canada and the United States — in the International Adult Bible Contest in Jerusalem.

The contest — sort of a spelling bee, but with biblical verses rather than words — has the contestants answer the minutest of details about the most obscure of biblical books. Contestants must locate or complete fragments of biblical verses, identify who said which quotation to whom, or name geographical details of the ancient Land of Israel.

The contest draws 27 finalists from all over the world, ages 24 and up, who take a rigorous written exam. The competition ends in a final round of 16, where contestants are quizzed orally in front of an audience — one that includes government ministers — at the International Convention Center on Dec. 28. The winner receives a cash prize of $10,000. Shahak was one of the international competition’s final eight contestants when it was last held in 2014.

Shahak and Frohlich love the Bible for different reasons. Frohlich, who grew up in Edmonton, Alberta, enjoys its narrative and moral questions. She delved into the Bible during her post-high school year studying at Midreshet Harova, a seminary in Jerusalem’s Old City, where she took a Bible class that had her memorize details of chapter upon chapter of book after book.

“Once it gets into your system, it’s there forever,” she said.

Frohlich is now a graduate student at New York University studying 19th-century Jewish intellectual history. Sometimes she will decipher a difficult biblical Hebrew word by looking at its translation in Yiddish, a language she uses for her graduate studies. She remembers details by writing a summary of each chapter by hand. Reading a new biblical book, she said, is “like a whole world opening up.”

“Judges is a compilation of some of the most bizarre stories anywhere in the Bible, and it can be very difficult to read,” said Frohlich, recalling her days in seminary. “I would come back to my dorm at night and be so upset at the stories in Judges.”

Shahak, the son of Israeli parents, grew up in the haredi Orthodox neighborhood of Borough Park, Brooklyn, and loved immersing himself in the Bible’s rich Hebrew. He has since enjoyed mapping Hebrew’s connections to other ancient Semitic customs and languages, like Akkadian. But his love of words extends beyond the Middle East — a J.R.R. Tolkien buff, he once had a conversation in Middle Elvish on the New York City subway.

In addition to being a cantor, Shahak studies violin at the Aaron Copland School of Music. One of the ways he remembers biblical details is by putting them to song. He’s also a former professor of Hebrew at Y.U., his alma mater.

“Something that bothers me is how little most Orthodox Jews know about Jewish history, and you can’t know Jewish history without knowing Bible,” he said. “Biblical history is not in a vacuum, that it maybe happened but we don’t really talk about it. I think it was real and it did happen, and we have to understand how it happened and what it means for us.”

The way the Bible contest finals are structured, Shahak and Frohlich must face off as two of the final eight contestants to compete directly against each other. Ultimately they are rooting for each other.

“This is an amazing opportunity to do the contest together,” Frohlich said. “I’m excited, and I’m looking forward to finally going.”

But Shahak said that once you get up on stage, all of the reviewing, memorizing, singing and debating can only help so much.

“At this point I think you just need to not drive yourself crazy, and get in there and do your job,” he said. “It is a crapshoot. You can be asked everything you know or everything you don’t.”