Want to throw the ultimate Chrismukkah party? Here’s how. 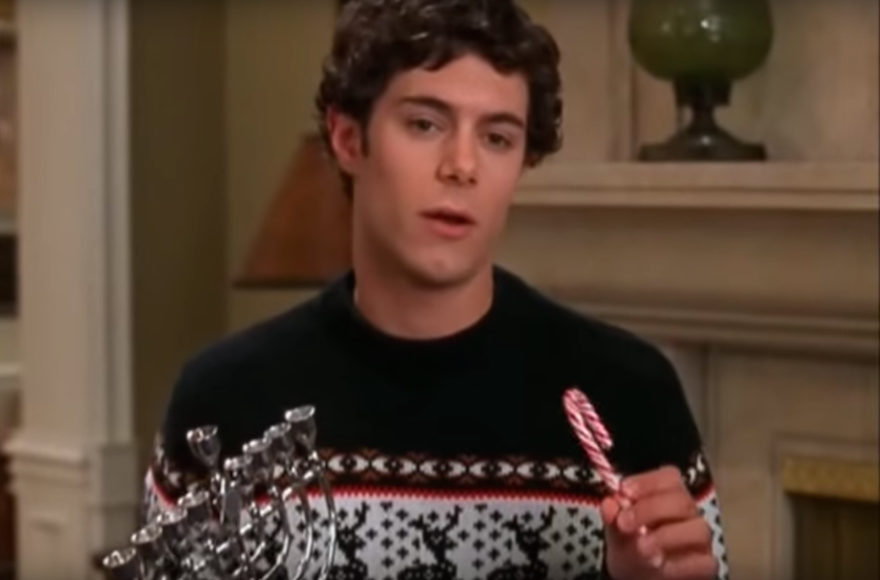 Adam Brody as Seth Cohen in "The O.C." holding a menorah and a candy cane. (Screenshot from YouTube)
Advertisement

(JTA) — Back in 2003, a lovable half-Jewish character named Seth Cohen introduced the term “Chrismukkah” — an irresistible, if somewhat controversial mash-up of Hanukkah and Christmas — to the country on the teen drama “The O.C.” In its ideal form, Chrismukkah combines all of the best parts of both holidays, from menorahs to Christmas lights and everything in between.

Chrismukkah was “born in the writers room,” “The O.C.” creator Josh Schwartz told the Huffington Post, adding, “we probably should’ve done a better job of trademarking it and selling greeting cards.”

This year, the first night of Hanukkah falls on Christmas Eve — meaning it’s the perfect occasion to mark both holidays in one party.

Of course, there’s no mistaking that Hanukkah and Christmas are two different holidays commemorating two distinct traditions. But if your family is interfaith, or you’re looking to throw a party with a diverse group of friends, or if you’re just looking to do something different this year, here are some tips to celebrate both holidays with one fun event.

Never has an ugly piece of clothing been so en vogue — everyone from Seth Rogen to Whoopi Goldberg has jumped on the knitwear bandwagon. Hanukkah and Christmas sweaters show off the colors of both holidays in the best way.

The term “mazel tov cocktail” had its 15 minutes of fame this year when a Donald Trump surrogate used the term on CNN (instead of Molotov cocktail, of course). But the drink already existed — take this recipe from a Washington, D.C., deli, for instance. Sweet, warm mulled wine — a Christmas classic — is a nice complement to the bubbly Jewish cocktail.

Play the indie holiday music playlist from “The O.C.” (with some Jewish favorites)

“Have a Very Merry Chrismukkah,” the third soundtrack released by the show, features Christmas songs played by indie rockers such as Jimmy Eat World and Ben Kweller. But you might want to balance it out with some Hanukkah music, like Adam Sandler’s classic song or Sharon Jones and the Dap Kings’ more recent funky tune, since “The O.C.” collection, despite the name, only includes Christmas tunes.

Set up stockings and stuff them with gelt and dreidels.

Placing these Hanukkah classics in some Christmas stockings will dress up your party room with a nice interfaith vibe.

The yamaclaus — forgive the warped, overly phonetic spelling — is perhaps the most inventive Chrismukkah creation from “The O.C.” You can order this Christmasy kippah from a website entirely devoted to it.

Get your ornaments ready.

News flash: There are Chrismukkah ornaments that you can hang pretty much anywhere.

You could feature traditional Hanukkah treats like sufganiyot alongside figgy pudding. But why not up the ante here: Try putting egg nog in your Jewish style doughnuts and ordering blue and white candy canes.