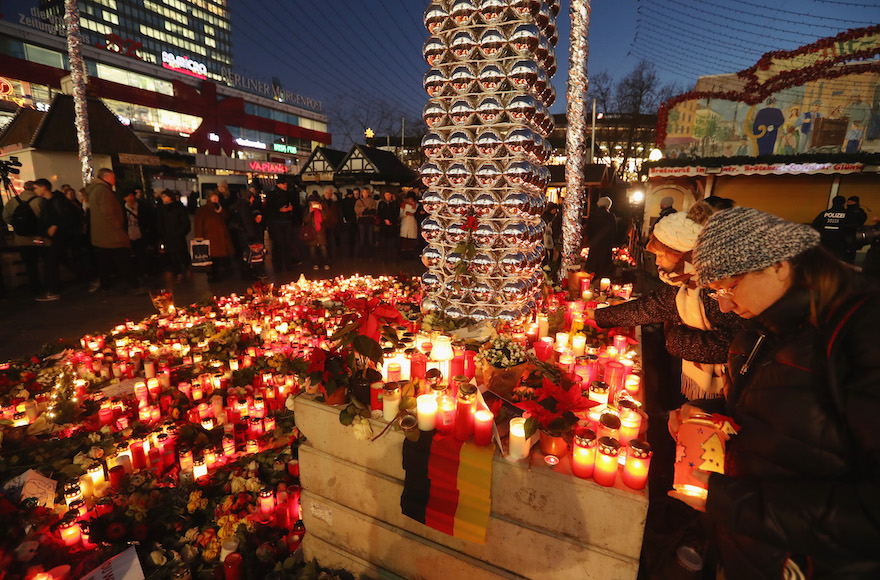 Mourners laying flowers and candles at a makeshift memorial near the site where two days before a man drove a heavy truck into a Christmas market in an apparent terrorist attack in Berlin, Dec. 21, 2016. (Sean Gallup/Getty Images)
Advertisement

BERLIN (JTA) — Even before the deadly attack on a Christmas market in Berlin, Jews in Germany were divided in their approach to the arrival of hundreds of thousands of immigrants from Muslim countries since 2014.

Citing a Jewish moral duty to aid the displaced, many Jewish organizations, synagogue groups and individuals have rallied to help the newcomers, including asylum seekers fleeing the civil war in Syria. But some Jews have warned that the influx of immigrants risks importing to Germany the homicidal anti-Semitism of Muslim extremists who attacked Jewish targets in France, Belgium, Denmark and beyond.

In Monday’s  attack, a man described by the Islamic State terrorist group as one if its “soldiers” killed 12 people and wounded 48 by plowing a stolen truck through the Kaiser Wilhelm Memorial Church market. While police hunt for suspects, the attack is likely to further polarize competing views on Muslim immigration in German society in general – especially among Jews who fear they will be among those targeted by Islamists here.

Following the attack, whose perpetrator is presumed to be at large, the top priority is to take on “this army of Muslims from the wildest part of the earth,” said Pavel Feinstein, a member of Berlin’s Jewish community who supports the far-right Alternative for Germany party, whose manifesto from April declares that “Islam is not part of Germany.” AfD, as the party is known, also is accused of being a hotbed for anti-Semites.

Feinstein, 56, told JTA that he came to espouse the AfD view after hearing the slogan “Hamas, Hamas, Jews to the gas” being chanted at an anti-Israel demonstration two years ago in Berlin.

“They weren’t just Islamists, they were also normal Muslims, students and so on,” he recalled. “And no one was charged or punished.

“Up to then I felt at home in Berlin. And now this feeling is gone.”

The hostility expressed by Feinstein, an artist who immigrated to Germany from the former Soviet Union with his family in 1980, may be more common among Russian-speaking Jews, who constitute the largest of the three contingents that make up Germany’s present-day Jewish population of some 200,000 people. And such views are likely to only harden after the attack, in which one Israeli was wounded. His wife remained missing on Wednesday and was feared to be among the dead.

Feinstein’s sentiment seems less prevalent among Jews who grew up after World War II in a society whose youth were taught to reject any semblance of the murderous Nazi xenophobia and anti-Semitism. His rhetoric seems to be even rarer among the 7,500 Israelis living in Berlin, some of whom say they left for Germany partly over what they see as Israel’s rising nationalism.

To be sure, many Russian-speaking Jews, including Sergey Lagodinsky, a Green Party politician and member of the Berlin Jewish community council, do not subscribe to Feinstein’s embrace of a far-right vision. Meanwhile, among Jews with deeper roots in Germany, many speak openly and clearly of the risks connected to massive immigration from Arab countries, as do some of Berlin’s Israeli Jews.

Jews of all backgrounds here tend to be “skeptical” of the wisdom of letting in large numbers of Muslims, as has been the policy of German Chancellor Angela Merkel, Lagodinsky said. But Russian-speaking Jews in Germany generally express this “through a more populist way,” including by “engaging with populist parties and ideas,” he added.

Russian speakers of all religions, who make up a large minority of several million people in Germany, are not the only ones showing a proclivity to populism amid what some pundits are calling Germany’s immigration crisis.

On the eve of a big election year in this country, the immigration issue is bolstering AfD, which the mainstream representatives of Jews in Germany reject for the xenophobic and sometimes anti-Semitic rhetoric of some of its members.

While the AfD missed the 5 percent mark needed to enter parliament in the last federal elections in 2013, polls from before the market attack predicted the party would win 16 percent of the vote next year. The party currently holds seats in 10 of Germany’s 16 state parliaments, up from five a year ago.

Against this background, terrorist attacks may well cost the centrist Merkel her post and send Germany swinging harder to the right than it has in decades. Her decision in 2015 to allow into Germany 800,000 immigrants from the Middle East has already come under attack even inside her own party amid a string of incidents involving that population – including last summer’s brutal axe attack in Würzburg by a 17-year-old from Afghanistan.

Commenting on the attack, the Berlin director of the American Jewish Committee, Deidre Berger, told JTA that she was worried about the “more than 100,000 unaccompanied minors” among the asylum seekers who “are highly susceptible to the easy answers of radical Islamist ideology.”

Such events have also brought to a head tensions over this issue within the Jewish community, where some members describe the influx of Muslim immigrants as an existential threat.

The Central Council of Jews in Germany, which is the country’s main Jewish umbrella group and has also organized activities to assist Middle Eastern asylum seekers, has warned against a rightward tilt as an answer to the terrorist threat. And Charlotte Knobloch, 84 – a child survivor and head of the Munich and Bavarian Jewish communal organizations – told JTA that the AfD is “totally out of the question for Jewish people.”

On the other hand, in October 2015, the council’s president, Josef Schuster, said in a widely read interview with Die Welt that “there is now fear that with people of Arab origins, anti-Semitism in Germany could increase. I share this concern.” Schuster said the issue should be addressed by emphasizing integration initiatives among the newcomers. He also said he supported a magnanimous policy toward asylum seekers, though he added that “eventually” a quota would have to be agreed upon.

But his remarks exposed him to heated criticism by some Israelis In Berlin. Several dozen of them, along with non-Israeli activists, protested Schuster’s remarks at a rally in November 2015 outside the council’s offices, carrying posters of Anne Frank and of the biblical quote “Love Thy Neighbor.”

“I cannot stand by when the president of the Central Council of Jews in Germany assumes a far-right position, supports limiting refugee quotas and instrumentalizes anti-Semitism, homophobia and sexism while pretending to speak for ‘the Jews’ in Germany,” wrote Shaked Shapir in Berlin’s Hebrew-language magazine, Spitz, which devoted an entire edition to discussing Schuster’s 2015 remarks.

German officials have been careful not to speculate as to whether the church market attack is connected to radical Islam, as many here believe. The caution appealed to some Israelis in Berlin, who contrasted it with what they regard as a tendency to jump to conclusions in Israel.

“We like the fact that in Berlin it is more calm. They are still investigating, and we will wait,” said Ido Porat, who lives here with his wife and their two small children.

While most Jews in Germany don’t see the influx of migrants from Middle Eastern countries as an invasion, the issue is nonetheless particularly divisive to their communities, according to the German Jewish historian Michael Wolffsohn.