After UN settlement resolution, will another shoe drop? 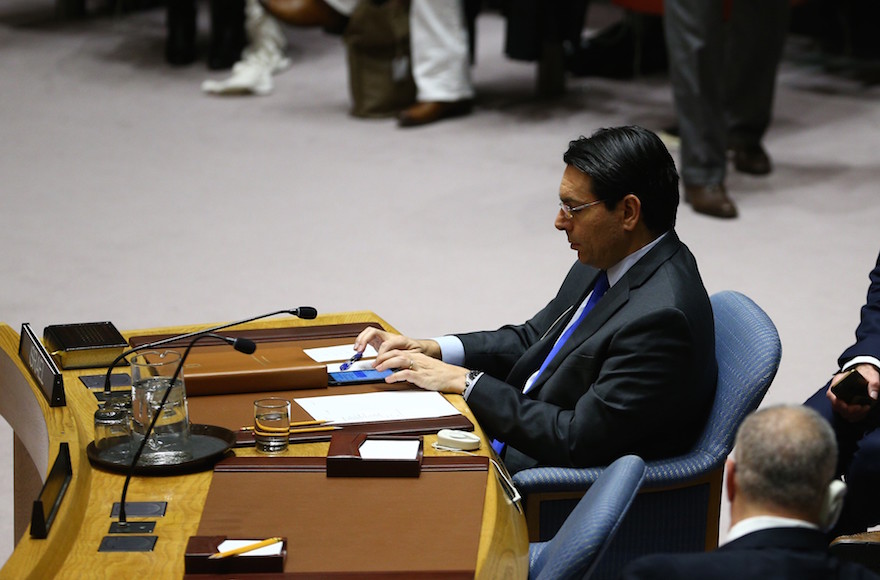 TEL AVIV (JTA) — The feeling in this country following the adoption of the anti-settlements resolution in the U.N. Security Council on Friday is more than palpable.

For those who observe Shabbat, there was the knowledge on Friday afternoon that a vote in New York would occur after all had sat down to dinner, with the outcome unknown until early the next evening. For others, Shabbat dinner was served with the TV volume turned up to hear the outcome of the vote.

By Saturday evening, and continuing into the new week, the resolution and its ramifications had become Topic A in cafes, barber shops, supermarkets and offices. The national letdown caused by the American abstention — outrage may be a better word — can be felt everywhere.

Now the conversation is turning to what may come next. There is concern that another shoe will soon drop, possibly a Security Council measure that would outline the parameters of a settlement of the Israeli-Palestinian conflict — a development that would fly in the face of the long-supported notion that only face-to-face negotiations can bring about a lasting peace agreement.

Next month, several new countries will be assuming seats on the Security Council, including Bolivia, Italy, Ethiopia, Kazakhstan and Sweden. The council will be chaired for the month of January by Sweden, whose government has made no secret of its pro-Palestinian bias. Sweden was the first European country to recognize a Palestinian state and its foreign minister, Margot Wallstrom, has essentially signed on as a cheerleader for the Palestinian Authority. Wallstrom blamed Palestinian “despair” for motivating the terrorists who carried out the Charlie Hebdo and Hyper Cacher killings in Paris in January 2015. Following the spate of stabbings of Israelis in Jerusalem and other cities, she charged Israel with “extrajudicial executions” of those who perpetrated the acts. On her recent visit to Israel, before which she was told she would not be welcome, no major Israeli political figure would meet with her.

How would a vote on a new resolution look? That’s unclear. Israel in recent years has made important strides in its relationships in Africa. Jerusalem’s ties to Ethiopia are long standing as well. But Addis Ababa is home to the African Union, some of whose members have excellent relations with Israel and some who don’t.

Kazakhstan, the site of a recent visit by Israeli Prime Minister Benjamin Netanyahu, also has had ties with Israel going back to the breakup of the Soviet Union in 1991. So does Italy, which will rotate its council seat with the Netherlands. Both countries are also members of the European Union, which as a member of the Quartet — along with the United States, Russia and the United Nations — has taken upon itself to push for a two-state solution based on direct negotiations.

These European members of the council bear a special responsibility toward Israel and the Jewish people. In three of them — France, Italy and the Netherlands — Nazi collaborators (and in the case of Italy, the state) collectively sent over 200,000 Jews to their deaths during the Holocaust. And the U.K., in the immediate aftermath of the Holocaust, prevented thousands of survivors with tattoos on their arms from entering prestate Israel, sending them to internment camps in Cyprus.

With that in mind, and with acts of anti-Semitism becoming a daily occurrence across the continent, will the European members arbitrarily dictate the security borders of the Jewish state, very possibly leaving it indefensible against neighbors and terrorist organizations?

And finally, what of the United States? With very few exceptions, the consensus view in Israel is that allowing the settlements resolution to be adopted will not bring peace, or any accommodation with the Palestinians for that matter, one day closer. Whatever one may feel about settlements, the Boycott, Divestment and Sanctions campaign against Israel has been re-energized by the resolution’s differentiation clause, which calls on countries to distinguish between Israel and the territories. Meanwhile, the Palestinian Authority is chomping at the bit to take Israel before the International Criminal Court. With Palestinian claims to the Temple Mount now buttressed by the resolution, the P.A. can now proceed to the U.N. Human Rights Council in March waving the settlements resolution in support of that body’s infamous Item 7 basket of anti-Israel resolutions.

All of this is enough to conclude that rather than advancing a settlement, the gulf has now been widened.

Enough damage has been done to the cause of peace by the Obama administration’s enabling the settlements resolution. In the three weeks that remain before a change of U.S. administrations, can we turn instead to the tragedy of Syria, of which Aleppo is the symbol? Or to fighting ISIS? Or to calling out Iranian deception regarding the nuclear agreement, its takeover of Lebanon, half of Iraq and half of Yemen, and its support for Hezbollah and Hamas?

Is it possible, for a just a moment, to stop fixating on an issue that calls not for bias and placing one’s ally in an untenable position, but for a solution that leaves the Jewish state in a more secure condition?