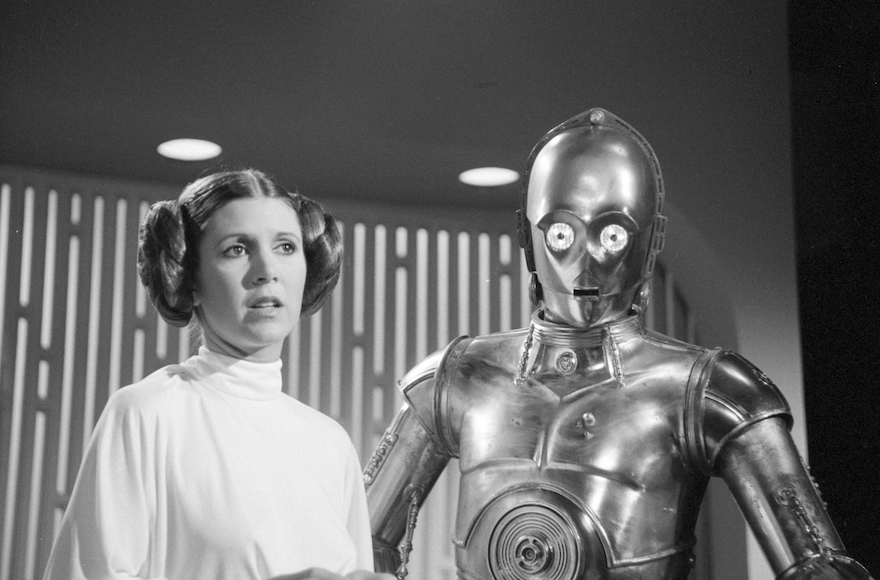 Carrie Fisher as Princess Leia in a photo from Aug. 23, 1978. (CBS via Getty Images)
Advertisement

(JTA) — Carrie Fisher, the actress best known for playing Princess Leia in the original “Star Wars” films, died days after suffering a heart attack on an airplane. She was 60.

Fisher had been in intensive care at the UCLA Medical Center after having a heart attack on Friday during a flight from London to her home in Los Angeles.

Fisher, a native of Beverly Hills, California, was the daughter of celebrity parents: singer Eddie Fisher, the son of Russian Jewish immigrants, and actress Debbie Reynolds.

The actress told J., the Jewish News Weekly of Northern California in 2008 that she frequently attended Friday night services and shared Shabbat meals with Orthodox friends.

After only one major film role — the comedy “Shampoo,” alongside Warren Beatty and Julie Christie — Fisher as a teenager was cast as Princess Leia in “Star Wars,”  George Lucas’ 1977 blockbuster. She reprised the memorable role in the next two “Star Wars” films and in 2015’s franchise reboot, “Star Wars: The Force Awakens.” She will appear in “Star Wars: Episode VIII,” set to be released in 2017.

Also a prolific writer, Fisher wrote four novels and three memoirs, including “Postcards from the Edge,” in which she described her substance abuse issues. She was married and divorced from the Jewish singer Paul Simon.