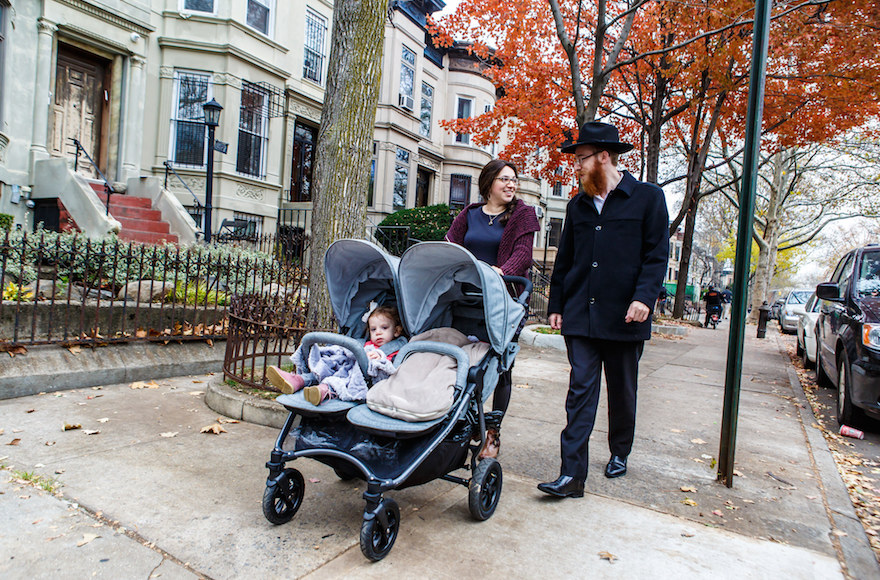 Rabbi Mendel Alperowitz, right, Mussie Alperowitz, left, and their two daughters, ages 18 months and 2 months, walking in Crown Heights, Brooklyn, Nov. 25, 2016. They will soon be moving to South Dakota to establish a Chabad-Lubavitch center that will cater to the states Jewish community. (Chabad.org)
Advertisement

(JTA) — A rabbi and his family have moved to South Dakota, giving the state its only full-time rabbi.

Rabbi Mendel Alperowitz and wife Mussie, along with their children, arrived on Dec. 24 in Sioux Falls, where they will open a Chabad center.

The rabbi, who moved from Brooklyn, visited the state twice before deciding to move there.

“What actually happened, people were so excited and so appreciated what we were doing, so kind to us and really inviting us to come and move here,” Alperowitz told the local television station KSFY. “We never thought we’d do that. I came back another two times, visited with people. Each time I was welcomed so warmly. People across Sioux Falls and the great state of South Dakota, Jews and non-Jews, were so warm and welcoming that we decided, we want to make this home.”

The number of Jews residing in South Dakota is estimated to be about 400, but Alperowitz estimated it may be as high as 1,000, with many arriving in recent years to work in the state’s growing financial and health care industries, according to Chabad.org.

Though they will be based in Sioux Falls, the couple plan to travel to other Jewish communities in South Dakota and visit Jewish individuals throughout the state, including prisoners.

There are two active Reform synagogues in the state, Mt. Zion in Sioux Falls and the Synagogue of the Hills in Rapid City. Neither has a full-time rabbi.

The couple is planning a public community menorah lighting on Wednesday night, with the mayor of Sioux Falls expected to attend.