With US abstention, Israel again forced to face reality of world’s rejection of settlements 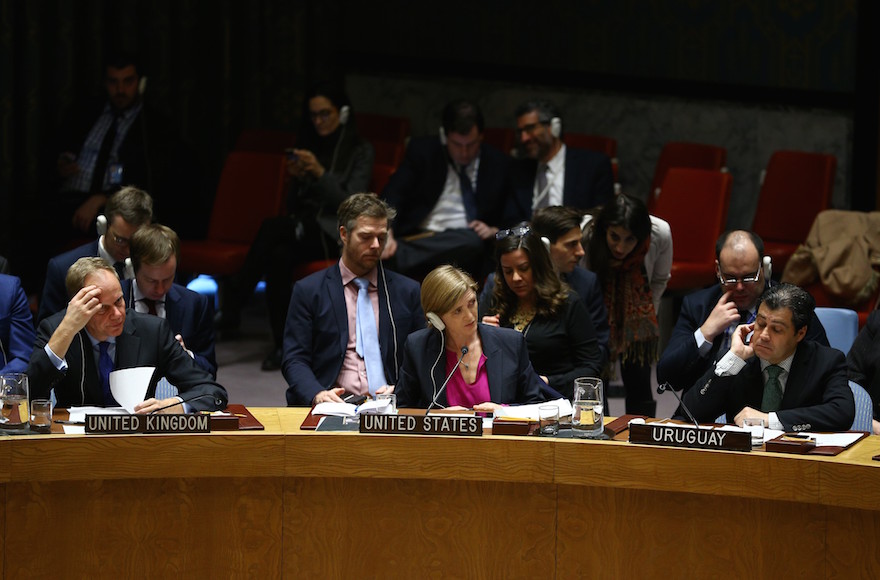 WASHINGTON (JTA) – Ahead of the unknowns a Trump administration will bring to American Middle East policy, the Obama administration allowed a bracing reminder on Friday that the international community does not recognize the validity of Israel’s presence in eastern Jerusalem and the West Bank.

The U.S. abstention on the U.N. Security Council vote last week was hardly unprecedented, but neither was it entirely consistent with recent U.S. policy. The Obama administration did not quite endorse Resolution 2334, but its abstention ensured the resolution, reaffirming the illegality of Israeli settlement in lands captured by Israel in 1967, would be adopted. As one of the five permanent members of the 15-member council, the U.S. could have exercised its veto power. Instead, the resolution passed, 14-0.

For 24 years, the United States under Presidents Bill Clinton, George W. Bush and Barack Obama insulated Israel from an international community that since 1967 has sought to exact consequences for its continued presence in disputed lands. After the signing of the Oslo Accords in 1993, those three administrations considered the isolation of the Jewish state at the United Nations to be counterproductive to encouraging Israel to take bold steps for peace.

The number of Security Council resolutions opposed by Israel dropped significantly during those three presidential eras and were narrowly focused on limited crises. During the Clinton presidency, Israel objected to just three resolutions adopted by the council, and six adopted during the George W. Bush tenure — none of which spoke directly to the legality of Israel’s presence in the West Bank and Jerusalem. In the 25 years prior, according to a comprehensive listing posted by Americans for Peace Now, Israel objected to 68 council resolutions allowed by the United States.

But with a couple of notable exceptions – Prime Minister Ariel Sharon’s pullout from Gaza and a patch of the West Bank in 2005, and Prime Minister Benjamin Netanyahu’s 2010 settlement freeze – Israeli settlement expansion continued unabated in that period, despite widening cooperation between Israel and the Palestinian Authority. By 2004, George W. Bush had effectively recognized the large settlement blocs bordering 1967 Israel as “realities on the ground” and suggested that the Palestinians would be compensated for the territory with land swaps.

Obama’s apparent message to the world on Friday is that incentives did not work in slowing settlement expansion. The carrot having wilted, the president reintroduced the stick.

Obama administration officials have said plainly that the expansion of settlements absent a peace process led to the decision to abstain. Samantha Power, the U.S. envoy to the United Nations, in her explanation of the abstention, listed the considerations that made the administration hesitate to allow the resolution – chief among them the historic anti-Israel bias at the United Nations and Palestinian intransigence. But she also noted that since the Oslo Accords, the settler population has increased by 355,000.

“It is precisely our commitment to Israel’s security that makes the United States believe that we cannot stand in the way of this resolution as we seek to preserve a chance of attaining our long-standing objective: two states living side by side in peace and security,” she said.

As much as the language in the resolution has stirred cries of “unprecedented” in Israel and in some pro-Israel precincts in the United States, it is broadly consistent with resolutions that the United States allowed from 1967 at least through the end of Jimmy Carter’s presidency in January 1981.

Last week’s resolution reaffirmed “that the establishment by Israel of settlements in the Palestinian territory occupied since 1967, including East Jerusalem, has no legal validity,” and constituted a “flagrant violation” of international law. Resolution 465, passed in March 1980 under Carter with a U.S. vote in favor, determined that “all measures” that would change the physical or demographic character of the occupied lands, including Jerusalem, “have no legal validity” and are a “flagrant violation” of the Fourth Geneva Convention. It further called on countries to “distinguish” between Israel and the West Bank.

Under the administrations of Ronald Reagan and George H.W. Bush, the council did not explicitly reject settlements as illegal, but referred to earlier resolutions that did so while continuing to assail the occupation as untenable. Resolution 605, passed under Reagan with a U.S. abstention in 1987, “recalled” Resolution 465 passed under Carter and said the council was “gravely concerned and alarmed by the deterioration” in the territories. Under George H.W. Bush, Security Council resolutions consistently decried the “deteriorating” situation and admonished Israel for its “violation” of Geneva conventions.

Critics say that what’s new is the call to distinguish between Israel and the territories, though Resolution 465 calls on countries “not to provide Israel with any assistance to be used specifically in connection with settlements in the occupied territories.”

The practical consequences of the resolution passed last week seem limited. Its provisions already exist in the U.N. canon, and if any harm seems immediately forthcoming, it is in pledges by leading members of the Republican-led Congress to cut funding to the United Nations in the wake of its passage.

If there was an unprecedented element to the affair, it was in the response by Israel’s leadership and some in the U.S. pro-Israel community. Relations between Obama and Netanyahu have never been smooth, but even critical statements have been tempered by thanks for enhanced security assistance and other signals of friendship.

Not this week. Language reserved for anonymous attacks or “leaks” from closed-door meetings went on the record.

“The Obama administration carried out a disgraceful and anti-Israel trap at the United Nations,” Netanyahu said Saturday at the lighting of the first Hanukkah candle.

“Obama’s an anti-Semitic Israel hater sympathizing with radical Islamic terrorists,” said Morton Klein, the president of the Zionist Organization of America, in his first-ever tweet. “He likes his Jewish friends, not the Jewish people.”

Netanyahu, who in the weeks before was boasting to all comers about Israel’s expanding relations with India, China, Russia and a host of African countries, launched steps redolent of the “you and me against the world” era that predated Oslo. He suspended ties with New Zealand and Senegal, two of the four nations that reintroduced the resolution after Egypt pulled it under pressure from Netanyahu and President-elect Donald Trump. He summoned for rebukes ambassadors from the United States and other Security Council member states with diplomatic ties to Israel. And he canceled a visit by the prime minister of Ukraine, which supported the resolution. His government cut off all but security ties with the Palestinian Authority.

Netanyahu and his ambassador to Washington, Ron Dermer, said they were counting on the Trump administration to reverse course. Dermer said in multiple interviews he had evidence that the Obama administration did not simply abstain but colluded in framing the resolution, an accusation strongly denied by administration officials.

Israel is now looking ahead to a new American order. At the Hanukkah ceremony, Netanyahu spoke of “our friends in the incoming administration” — David Friedman, Trump’s ambassador designate, is an active supporter of the settlement movement — and warned that “in this new era, there will be a much higher price to be paid for harming Israel, and it will be exacted not only by the United States, but by Israel.”

Will Trump usher in that era? His pronouncements after the resolution were relentlessly critical, promising in one tweet that “things will be different” at the U.N. after he assumes the presidency and lamenting in another that the council’s action “will make it much harder to negotiate peace.” In a third, he said the United Nations had become “a club for people to get together, talk and have a good time. So sad!”

In total, the statements appeared to regret the passage of the resolution – but stopped well short of pledging to reverse its effects.