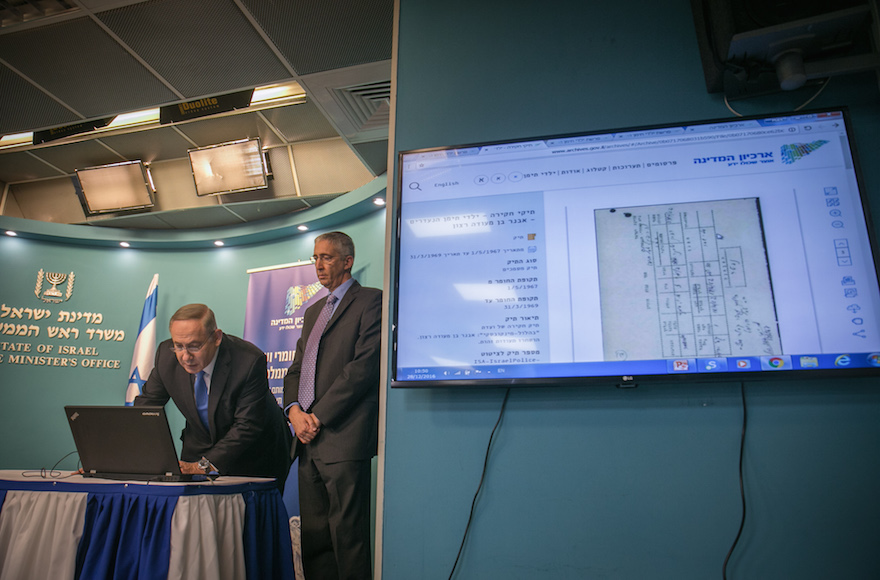 JERUSALEM (JTA) — Israel inaugurated an online database of some 200,000 pages of declassified documents about the long-controversial Yemenite children affair in a Jerusalem ceremony.

By making the documents public Wednesday, the state hopes to end the controversy, which has persisted in Israel for decades.

Since the 1950s, more than 1,000 Israelis families have alleged their children were systematically kidnapped from Israeli hospitals and put up for adoption in the country and abroad. The claims of the families, mostly immigrants from Yemen, were generally dismissed by authorities.

“Today, we right a historic wrong,” Prime Minister Benjamin Netanyahu said at the launch of the database at his office. “For close to 60 years people did not know the fate of their children. In a few minutes, any person can access the pages containing all the information that the government of Israel has.”

The minister for regional cooperation, Tzachi Hanegbi, approved the declassification of the documents after Netanyahu charged him with overseeing an investigation into the affair. Hanegbi called the launch of the database “a brave and important act.”

Three government-appointed committees have looked into the Yemenite children affair, and each concluded that the majority of the children died in the hospital and were buried without the families being informed. Scholars have reached similar conclusions.

The last committee sealed some of the testimonies in the state archive for 70 years. Those documents are among the panel’s findings that the database of the Israel State Archives has made available for public viewing.

Nurit Koren, a Likud party lawmaker who chairs the Knesset panel tasked with researching the affair, welcomed the release of the documents but said in a radio interview that it was “just the beginning of the path.” Her cousin was among the children who disappeared.

Koren said the database included just half of the 400,000 documents generated by the three investigative committees. She also noted that one committee found that the Yemenite children affair continued until 1966, while the database only includes documents from 1948 to 1954.

“We are obliged to give these families answers,” she said.

Hanegbi and Koren both called for the establishment of a DNA database to help connect families with their disappeared children.