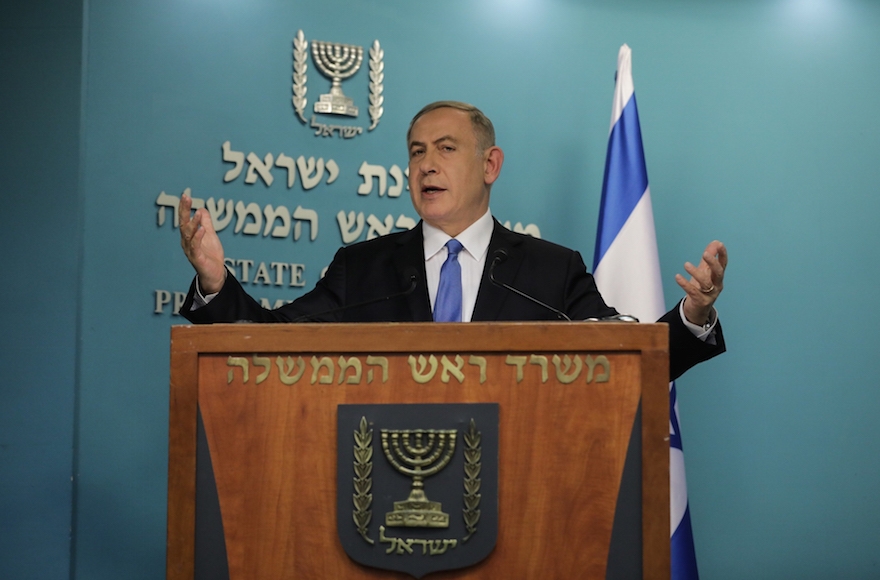 (JTA) — Israeli Prime Minister Benjamin Netanyahu rejected a policy speech by Secretary of State John Kerry, saying the emphasis by the United Nations and the Obama administration on settlement construction downplayed the role of Palestinian repudiation of Israel’s legitimacy as an obstacle to peace.

“How can you make peace with someone who rejects your very existence?” Netanyahu said in a speech Wednesday barely an hour after Kerry spoke in Washington, D.C. “This conflict is not about houses in Jerusalem, Judea and Samaria, Gaza or anywhere else. This conflict has always been about Israel’s very right to exist.”

Kerry in his lengthy remarks at the State Department defended the U.S. abstention on a U.N. Security Council resolution Friday that condemned Israeli settlement construction.

He also defended the Obama administration’s support for Israel and laid out six principles to guide future Israel-Palestinian peace talks. The principles included two states with secure recognized borders, and a fair and “realistic” solution to the Palestinian refugee problem that did not “affect the fundamental character of Israel.”

“It is not this resolution that is isolating Israel,” Kerry said, referring to the Security Council vote. “It is the pernicious policy of settlement construction that is making peace impossible.”

Netanyahu said Israelis were “deeply disappointed” in Kerry’s speech and said the focus on settlements is misplaced, as Israel is the only stable democracy in a chaotic region.

Netanyahu reiterated his stance that the only way to reach Israeli-Palestinian peace is through direct negotiations between the Palestinian Authority and Israel. He also reiterated the accusation that the United States engineered the passage of the Security Council resolution, despite repeated denials from Washington, and called on the Obama administration to block any further attempts to condemn Israel at the U.N.