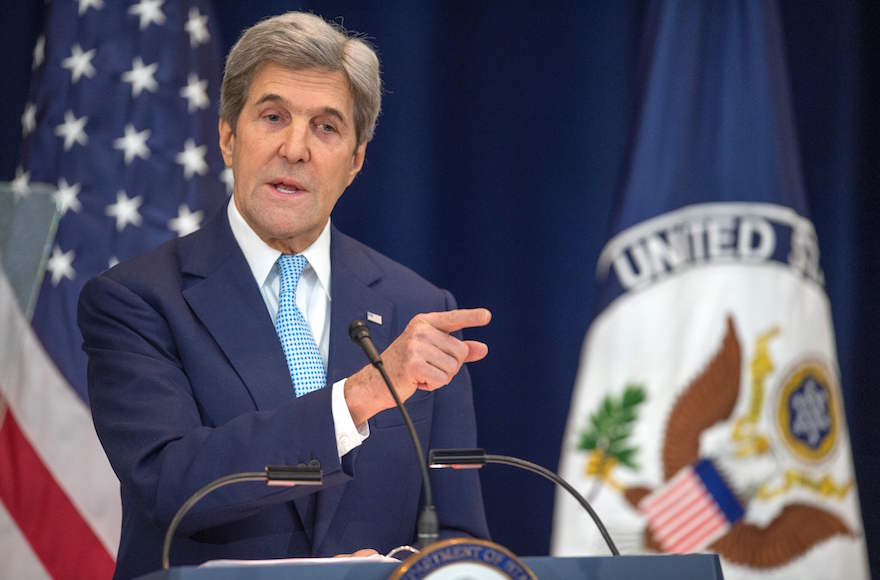 U.S. Secretary of State John Kerry laying out his vision for peace between Israel and the Palestinians at the state department in Washington, D.C., Dec. 28, 2016. (Paul J. Richards/AFP/Getty Images)
Advertisement

(JTA) — Secretary of State John Kerry laid out six principles that the United States believes must govern the resolution of the Israeli-Palestinian conflict while rebuking Israel’s “pernicious policy of settlement construction.”

In lengthy remarks from the State Department in Washington, D.C., on Wednesday, Kerry said peace must provide for secure and recognized borders based on the 1967 lines, with mutually agreed land swaps and a contiguous state for the Palestinians.

Other principles included the fulfillment of U.N. General Assembly Resolution 181, which called for two state for two peoples; a fair and “realistic” solution to the Palestinian refugee problem that did not “affect the fundamental character of Israel”; shared capitals in Jerusalem that ensured free access to holy sites and no redivision of the city; Israeli security guarantees along with an end to the occupation; and a final end to the conflict and all outstanding claims along with the establishment of normalized relations.

Kerry’s speech came with just weeks left in the Obama administration and in the wake of a controversial U.N. Security Council resolution condemning Israeli settlements that the United States declined to veto, prompting unusually harsh criticism from Israeli officials. The speech included a firm defense of the U.S. abstention on the resolution, which Kerry said “does not break new ground” and is consistent with previous council resolutions criticizing the settlements that were allowed by U.S. presidents from both parties. Kerry said the U.S. action was motivated by mounting concern that the two-state solution is growing ever more imperiled by Israeli settlement activity.

“Despite our best efforts over the years, the two-state solution is now in serious jeopardy,” Kerry said. “The truth is that trends on the ground — violence, terrorism, incitement, settlement expansion and the seemingly endless occupation — are combining to destroy hopes for peace on both sides and increasingly cementing an irreversible one-state reality that most people do not actually want.”

Speaking directly to Israeli criticism of the U.S. abstention, Kerry said, “It is not this resolution that is isolating Israel, it is the pernicious policy of settlement construction that is making peace impossible.”

Kerry dwelled at length on Israeli settlement policy in the West Bank, charging leaders of the settlement movement with “purposefully accelerating” trends that will make a two-state solution impossible. Kerry noted that the Israeli settler population has grown by 270,000 since Obama took office in 2009 and he lamented the reversal of trends toward greater Palestinian control initiated with the 1993 Oslo Accords.

“The Israeli prime minister publicly supports a two-state solution, but his current coalition is the most right-wing in Israel’s history, with an agenda driven by the most extreme elements,” Kerry said. “Policies of this government, which the prime minister just described as more committed to settlements than any in Israel’s history, are leading in the opposite direction. They’re leading to one state.”

Kerry also had harsh words for the Palestinians, condemning their incitement to violence and glorification of terrorists, and he slammed the attempt to isolate and delegitimize Israel in the United Nations and elsewhere.

“The murders of innocents are still glorified on Fatah websites,” Kerry said, referring to the political faction headed by Palestinian Authority President Mahmoud Abbas. “Despite statements by President Abbas, too often they send a different message by failing to condemn specific attacks and by naming public squares, streets and schools after terrorists.”

But Kerry reserved the bulk of criticism for Israeli settlements, portraying them as obstacles to peace and counter to Israeli interests, even as he acknowledged that they are neither the sole nor the prime reason the conflict endures. Kerry also lashed out at recent Israeli legislation aimed at legalizing settler outposts built deep in the West Bank.

In the face of intense criticism from Israeli leaders and some pro-Israel voices in the United States, Kerry also emphasized the abiding American support for Israeli security going back decades and reiterated Obama’s pro-Israel bona fides, noting the unprecedented American military assistance for Israel and the administration’s opposition to attempts to isolate Israel in international forums.