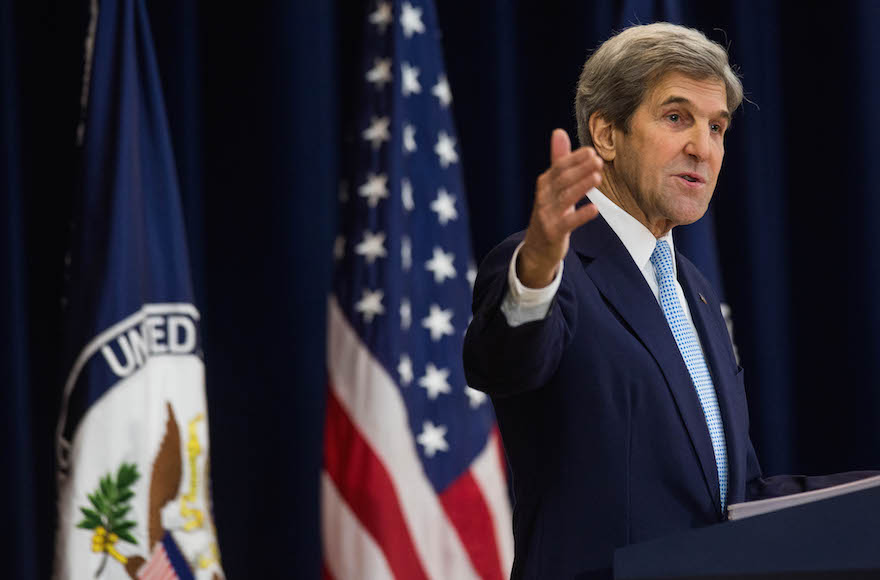 (JTA) — The British government in an unusual move criticized U.S. Secretary of State John Kerry for focusing on Israeli settlements and commenting on the makeup of the Israeli Cabinet in a speech critical of Israeli policies.

A spokesman for Prime Minister Theresa May said Thursday that it was inappropriate of Kerry to attack the makeup of the democratically elected Israeli government – a key ally of both the United States and Britain, the Daily Mail reported.

“We do not … believe that the way to negotiate peace is by focusing on only one issue, in this case the construction of settlements, when clearly the conflict between the Israelis and Palestinians is so deeply complex,” the unnamed spokesman was quoted as saying. “And we do not believe that it is appropriate to attack the composition of the democratically elected government of an ally.”

The British government, the spokesman added, “believes that negotiations will only succeed when they are conducted between the two parties supported by the international community.”

In a speech Wednesday laying out his parameters for Israeli-Palestinian peace, Kerry criticized Israeli Prime Minister Benjamin Netanyahu and his Cabinet for undermining the two-state solution with his settlement policy in the West Bank. Much of the speech was devoted to settlements, but Kerry also condemned the veneration of terrorists by Palestinians.

Kerry’s hourlong address, which Netanyahu called a “major disappointment,” followed harsh criticism by Israel on the U.S. abstention of a United Nations Security Council resolution passed last week criticizing settlements. The United States could have quashed the resolution with a veto, as it has many times in the past.

Britain backed the resolution calling for an end to Israel’s construction of settlements in the disputed territories of the West Bank and eastern Jerusalem. Netanyahu has canceled a meeting with May over the vote as part of a series of steps designed to either punish the 14 out of 15 Security Council member states that voted in favor of the resolution or express Israel’s displeasure at their votes.

Ahead of Britain’s June referendum on leaving the European Union, President Barack Obama urged Britons to vote to remain in the bloc in what many observers deemed inappropriate interference in internal issues. The voters backed leaving the EU.

A month after the vote May, a Conservative politician and vocal supporter of the Brexit, replaced David Cameron, who initiated the referendum though he lobbied against a Brexit, and resigned after the results came in.

Boris Johnson, a former mayor of London who is now foreign minister under May, lashed out in April against Obama’s intervention, calling it not only inappropriate but also hypocritical.

“For the United States to tell us in the U.K. that we must surrender control of so much of our democracy – it is a breathtaking example of the principle of do as I say but not as I do,” he said.

Johnson, who is a fervent advocate of Israel, also wrote in an op-ed that month that Obama’s position reflects “the part-Kenyan President’s ancestral dislike of the British empire.”

Kenya was a British colony before it was given independence amid a wave of terror against white settlers there and soldiers.

The president’s father, Barack Hussein Obama Sr., was Kenyan. Obama was born in the United States.