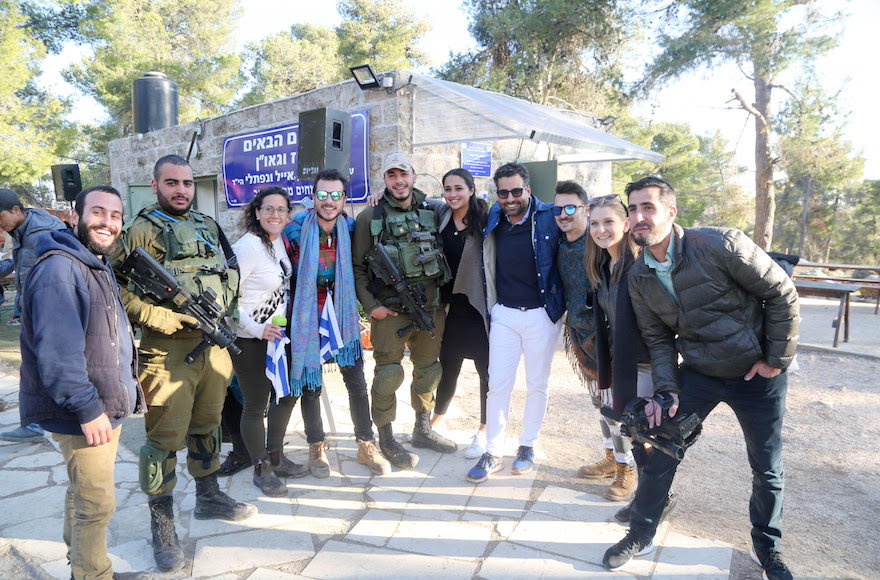 JERUSALEM (JTA) – About 200 Jews from around the world toured the West Bank in response to U.S. Secretary of State John Kerry’s recent speech warning of the dangers of settlement expansion.

The group, organized on short notice by Miami-based fashion designer Joseph Waks, visited Jewish communities and met with their leaders on Monday to show solidarity with the settlement movement. A few dozen of the participants flew in from various countries. Most were foreign citizens living in or visiting the country for Hanukkah, and a handful were native Israelis.

“This was not a political trip. It was more to show we care and support the people in Judea and Samaria [the biblical names for the West Bank, widely used in Israel] and Jerusalem, which is now being questioned as well” regarding Israeli territorial claims, Waks said in a telephone call Tuesday from the Western Wall in the Old City of Jerusalem, where the tour wrapped up.

“We’re not experts. But we believe in our right to live in a Jewish state, and we’re proud of what has been built here,” he said. “We heard somebody say our state is no longer going to be Jewish, and we think that is questionable.”

Most of the world considers Israeli settlements in eastern Jerusalem and the West Bank illegal under international law, but Israel disputes this.

Waks said he thought the trip, which he coordinated with settler leaders, sent a strong message to the Obama administration that its critical approach to Israel was unacceptable. A self-described liberal and secular Jew, Waks said he initially supported President Barack Obama.

“But this president has turned out to be a disaster,” Waks said. “We hope the new administration [of President-elect Donald Trump] will support Israel and lead to a stronger Middle East, a stronger Jewish state and a stronger America.”

Waks announced and documented the trip on his Facebook page, which has 5,000 followers and is filled with right-wing Israel commentary. In a call to action a day after Kerry’s speech last week, he said the trip would be in “honor of John Kerry & the United Nations recent Anti-Semitic resolutions and shameless questioning of the Jewish historical and legal right to Israel.”

On Monday, he met the participants — representing various streams of Judaism and hailing from countries including France, Belgium, Russia, Ukraine and Australia — in Jerusalem. From there they packed onto four tour buses and headed to the West Bank. An unidentified Miami-based philanthropist who is a friend of Waks sponsored the trip, and the Jewish Journey’s tour company and the Yesha Council of West Bank settlements helped make it happen free of charge.

After stopping at the Psagot winery in the West Bank, where Dani Dayan — Israel’s consul general in New York and a settler leader who has a home in the area — made an appearance, the participants headed to the heavily American settlement of Efrat. The local boys’ choir regaled them with Hanukkah songs, and Shlomo Riskin, the settlement’s chief rabbi and co-founder, and Oded Revivi, the chief foreign envoy of the Yesha Council, addressed them.

Joseph Waks, fourth from the right, posing with Jewish visitors and soldiers at the Oz Vegaon tent outpost in the West Bank, Jan. 2, 2017. (Bobby Weitzner)

Their next stop was the Oz Gaon tent outpost, founded in response to the 2014 murder and kidnapping of three Israeli teenagers by a Hamas terrorist cell. It sits on the site where their bodies were found. The outpost is one of about 100 built without government authorization and against Israeli law. Some 400,000 settlers live in the West Bank, not including Jerusalem, the vast majority of them in the largest of the more than 120 authorized settlements.

The trip ended at the Western Wall, where Rabbi Shmuel Rabinovitch, who runs the holy site and has opposed the creation of an egalitarian prayer section there, greeted the participants.

Shapse Jacob, 36, a modern Orthodox attorney and businessman from New York, flew to Israel ahead of the tour, though he was planning to come anyway for his sister’s wedding. Jacob said he was motivated by the “stab in the back” from Kerry and the U.N. Security Council.

Jacob was always a big supporter of the Jewish state. But he said the tour, which was the first visit to the settlements he could remember, changed his thinking. Previously he had considered settlers a “little kooky” and said he was willing to listen to alternative views about Israel. But meeting Jewish residents of the West Bank showed him they were “just regular people going through the same things we all do.” Now Jacob said he is done trying to reason with Israel’s critics.

“It kind of taught me, we shouldn’t really care what others think,” he said. “It’s time to stop convincing the world and just do what you have to do.”

Last week, Kerry delivered a speech that laid out his principles for the resolution of the Israeli-Palestinian conflict and rebuked Israel’s “pernicious policy of settlement construction.” He said the settlement movement was attempting to thwart a two-state solution to the Israeli-Palestinian conflict, which would deny “freedom and dignity” to the Palestinians and threaten Israel’s Jewish and democratic character.

He also defended the controversial decision by the United States the previous week not to veto a U.N. Security Council resolution condemning Israeli settlements in the West Bank and eastern Jerusalem.

Prime Minister Benjamin Netanyahu and other Israeli officials criticized Kerry’s speech and the resolution in unusually harsh terms. Although most polls suggest that a majority of American Jews support a two-state solution and object to Israeli settlement policies, major American Jewish organizations and U.S. lawmakers from both parties joined in the criticism of Kerry. Trump said Israel was being treated “very, very unfairly.”

Dovish Jewish groups and some Democrats spoke out in defense of the Obama administration.

“Let’s be honest, Kerry looked like an idiot saying what he did,” Waks said. “We saw the outcry afterward from most Americans and from both Democrats and Republican politicians.”

While the West Bank tour was intended to give strength to Israelis, he said, meeting the “amazing” people living in the settlements had actually bolstered the participants’ faith in the Jewish state. Israel, Waks repeatedly said, needed to be strong given the “slaughter of Jews in every generation.”

“This is a country that America should be the most supportive of, and that is exactly what we want,” he said. “I think we created hundreds of new ambassadors to Israel today.”