Percentage of Jews in Congress sees slight rise to 5.6 percent in 2017 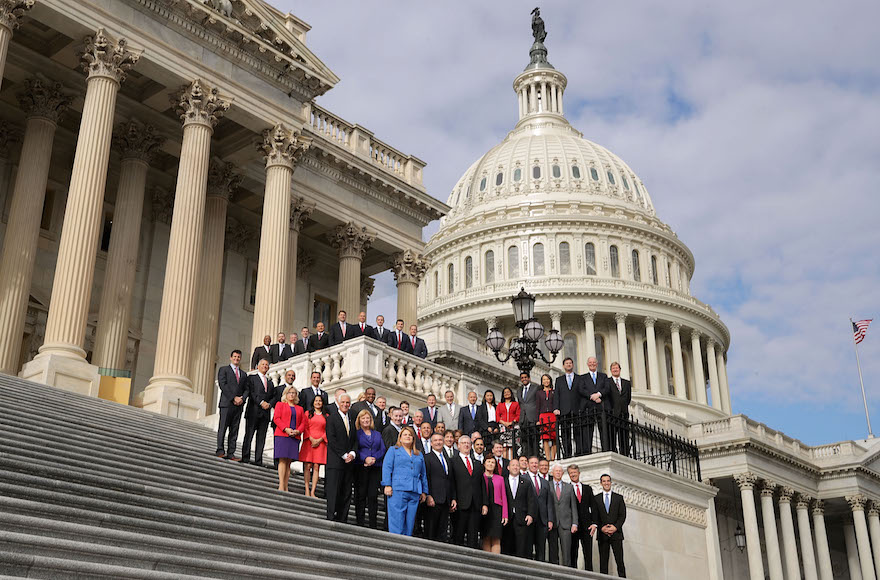 Incoming Republican and Democratic members of Congress posing for a group photograph on the steps of the House of Representatives in Washington, D.C, Nov. 15, 2016. (Chip Somodevilla/Getty Images)
Advertisement

(JTA) — The number of Jewish lawmakers increased in the newly elected Congress, with Jews and Hindus seeing the biggest gains among non-Christian groups, a report found.

Jews, who make up 2 percent of the U.S. population, constitute 5.6 percent of the 115th Congress — 30 seats in total — an increase from 5.2 percent and 28 seats in the previous Congress, according to an analysis by the Pew Research Center published Tuesday. The number of Hindu members of Congress increased to three from one.

Of the Jewish lawmakers, 28 are Democrats and two are Republicans. The two Republicans, Lee Zeldin of New York and David Kustoff of Tennessee, represent the only non-Christian Republicans in the new Congress.

The report noted that the number of Jewish senators and representatives is significantly lower than the 45 Jewish lawmakers who served in the 111th Congress in 2009-10.

Jews make up more than half of non-Christians elected to Congress for the first time — the largest share of Jews in any freshman class for which data are available, according to the report.

Proportionally, there are more Jewish senators in the 115th Congress, 8 percent, than representatives, 5.1 percent.