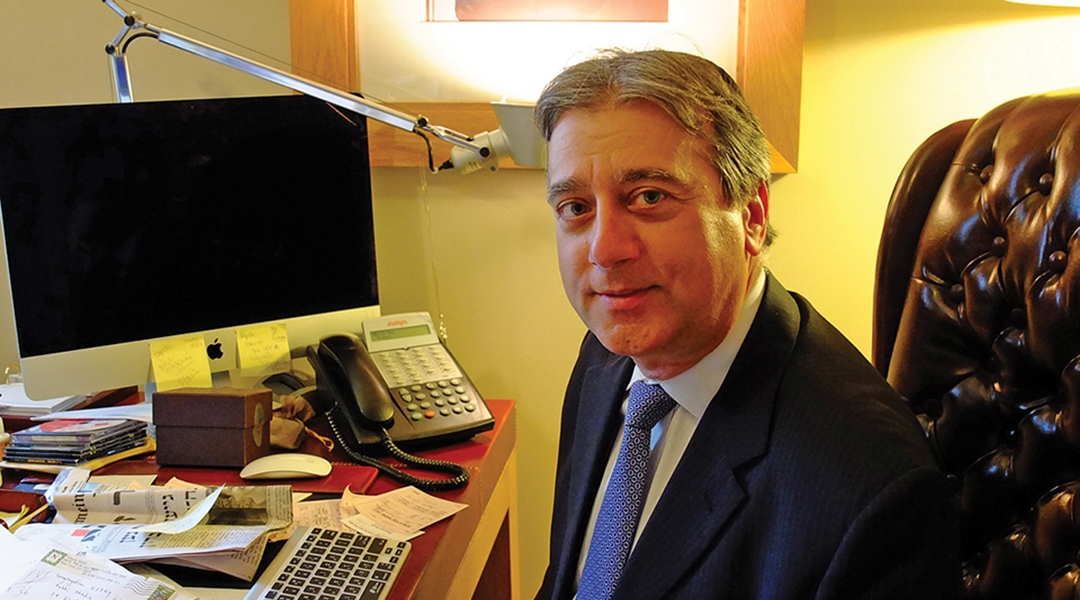 The local Sephardic Jewish community, known to be close-knit and intensely private, is dealing with a long-brewing but now full-out controversy this week, The Jewish Week has learned.

It centers on the rabbi of one of its leading synagogues, with implications for the Sephardic revival that has taken place in recent years on the Upper East Side of Manhattan.

Rabbi Elie Abadie, 55, a respected physician, educator and founding spiritual leader of the Edmond J. Safra Synagogue on East 63rd Street off Fifth Avenue, is being replaced after more than 14 years of service by the board of trustees, according to a Dec. 28 letter from the Edmond J. Safra Philanthropic Foundation.

The European-based foundation, chaired by Lily Safra, widow of the prominent banker and philanthropist, is active in more than 40 countries and is the primary financial resource for the congregation.

The letter, addressed to “the Sephardi community of the Upper East Side” and signed by the Council of the Safra Foundation, said that after failing to reach a financial agreement with the rabbi for years — his contract expired eight years ago — it “has determined that it cannot continue to support” the rabbi, whom it says has continued to receive “approximately $700,000 per year, which includes a mortgage and condo fees on the apartment provided” to him.

The letter asserts that over the last two years, the rabbi rejected a generous buyout offer, demanded $20 million in payments, half of which “he specified would need to be ‘legally tax-sheltered,’” and refused an offer by the Chief Rabbi of Jerusalem, Shlomo Amar, to have the matter settled by a beit din, or religious court.

“With a heavy heart” and after exhausting “every other possible avenue,” the foundation will, on Jan. 31, cut off its funding of the synagogue, to which it has contributed “resources of over $60 million to date,” the letter said.

Further, the foundation “has begun to provide significant funding to a new religious corporation known as Congregation Beit Edmond,” which will “take over the lease” of the current synagogue and continue its full range of services, classes and other activities, according to the letter.

In effect, nothing will change for congregants and worshippers except the name of the synagogue and the absence of the rabbi, the letter implies.

Rabbi Abadie, in a long response dated Dec. 30 and addressed to the congregation and “the greater Sephardi community of New York,” asserted that he is being forced out under false pretenses.

“I completely dispute all of the malicious, false, baseless and self-serving allegations contained in the foundation’s letter,” he wrote.

He denied “the foundation’s allegation of extortion,” and its “false narrative” that he put his own financial interests above the needs and interests of the community, which he has served since two years before the synagogue was built, in 2003. Prior to that, congregants met at a Sephardic minyan housed in the nearby Fifth Avenue Synagogue.

Lily Safra is said to have chosen Rabbi Abadie to serve at the congregation built and dedicated in memory of her husband.

The rabbi’s attorney, Terrence Oved, speaking on his behalf, told The Jewish Week: “It was never our intention to make this private dispute public. We believe that doing so creates and unnecessarily perpetuates a chillul HaShem [desecration of God’s name].”

He added that he and Rabbi Abadie “refused to allow the rabbi’s response to reveal names and details of discussions and communications that were made in confidence.

“For the rabbi, this is not now, nor has it ever been, an issue of salary compensation,” Oved said. “The rabbi wants to continue growing this community as he has done over the past 14 years.” The attorney said he is still hopeful that an amicable solution can be found, noting, “it is never how something begins that’s important, but how it ends.”

For now, though, there is nothing amicable about this rare public dispute. The sense of the foundation’s letter is that the single issue here is salary compensation, while Rabbi Abadie suggests it’s about control.

In his letter to the community, the rabbi accused the foundation of “bully tactics” and choosing to publicly shame him and his family. He said the foundation “has worked tirelessly to maintain dictatorial control over the congregation … operating with a lack of transparency,” and resisting his suggestions that a local board of directors be created and given power.

Several regular worshippers at the congregation — there are no dues-paying members — said that if there is a board, it operates in the shadows and is not known.

The foundation, through a spokesperson, directed The Jewish Week to the contents of its letter to the community.

It is believed that the foundation provides about half of the annual operating budget for the synagogue and the rest comes from the sale of High Holiday seats, fundraisers and contributions during the year from attendees.

Rabbi Abadie wrote that he has worked without a contract or cost of living increase in salary since 2008, and gave up his professorship in Sephardic studies at Yeshiva University and “sacrificed” his medical practice.

He said the foundation’s reference to a $700,000 annual salary is “purposely false and misleading,” noting that when he moved to the Upper East Side for the rabbinic post, he could not afford an apartment in the area for his wife and six children. He wrote that the foundation bought and owns the apartment, leaving him with “no permanent equity value.”

A few congregants contacted The Jewish Week on Tuesday to speak on behalf of the rabbi. They praised him as a caring spiritual leader, and criticized the foundation for being distant overseers, uncaring or unaware of the rabbi’s popularity.

Ellie Cohanim, a frequent worshipper at the synagogue, described Rabbi Abadie as “the heart and soul of the congregation, which would otherwise be just a building.” She said he is a leader who has gained recognition for the Sephardic traditions in the broader Jewish community and championed the issue of justice for Jewish refugees from Muslim and Arab countries.

Tracing his rabbinic lineage to 15th-century Spain and Provence, the rabbi has been a soft-spoken but forceful leader not only of the congregation, but also in the promotion of Sephardic culture.

Both the rabbi and the foundation invoked the memory of Edmond Safra in their letters to the community, seeking to honor his generosity and countless acts of charity. For now, though, there is a cloud around the congregation, and no one seems to know what will happen if Rabbi Abadie comes to work on Feb. 1, when the synagogue will be fully controlled by the foundation.