6 Israeli startups that want to change your everyday life 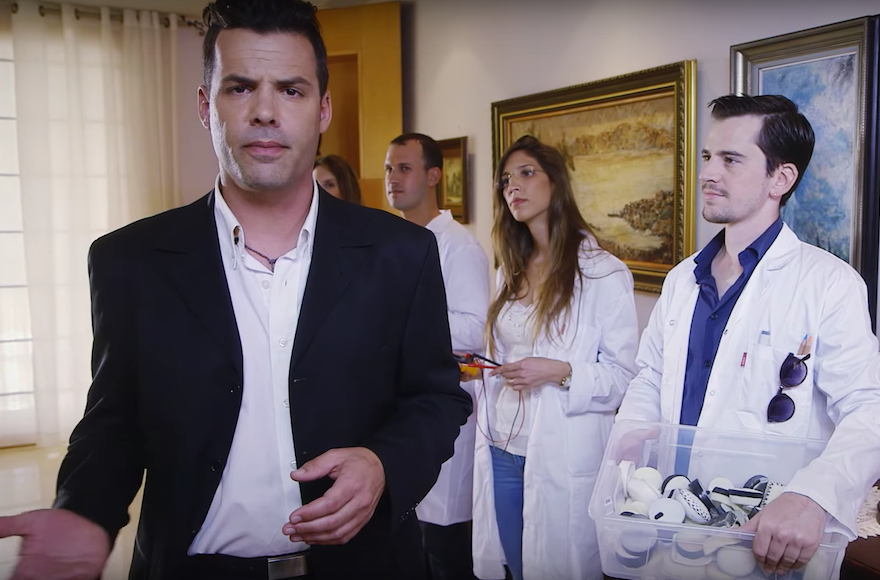 (JTA) — As any pro-Israel activist will tell you, innovators from the Jewish state have invented products and technologies you use all the time, from instant-messaging technology to Waze, the crowdsourced traffic app.

Israel’s tech scene is famously thriving, with about 5,000 startups across the country. Nearly 1,500 of those are in Tel Aviv alone — that’s one startup for every 300 residents of the city, the highest ratio in the world.

A new wave of Israeli companies is inventing more technologies to improve day-to-day life, and 16 of these innovators are in Las Vegas this week to present at the Consumer Electronics Show, one of the world’s premier technology trade shows that draws more than 150,000 attendees.

From slouch-prevention technology to a device that turns any surface into a touchscreen, here are six remarkable Israeli innovations participating in the show.

It’s a product perfect for concerned Jewish mothers everywhere: a wearable device that makes you sit up straight.

According to Upright Technologies, habitually bad posture can begin as early as age 12. And with our culture having us sitting and staring at screens all day, bad backs can be hard to avoid.

Upright aims to solve the problem with a small, white device that looks like a ball with a piece of sashimi on top. Place the “sashimi” — it’s really a sensor — on the small of your back and connect it to your phone; it will provide a gentle buzz whenever you slouch too much. The app also guides users through a program to get them in the habit of using good posture.

In a global economy, not knowing English or another common language can be a barrier to doing business. Lexifone is an app that aims to solve the problem by making the “languages” section of your resume all but irrelevant.

Lexifone’s function is simple: It instantly translates whatever you say into the language of whomever you’re speaking to, and vice versa. So if you’re on a call to an associate in Rome, you won’t need to know anything more than “ciao” (actually you don’t even need to know that). It’s easy to understand why this would be especially useful in Israel, a country with a unique native language that few others speak. Lexifone works in 15 languages, from Arabic to Taiwanese Mandarin.

One of the most widespread Israeli innovations is drip irrigation, a technology that saves water by having it drip into the ground from pinpricks in a hose rather than from a sprinkler. GreenIQ aims to take watering efficiency in private homes to the next level with a product called the Smart Garden Hub: It adapts your sprinkler system to the weather forecast. That way, it can increase water volume on hot, dry days, but shut off the system when it’s already raining.

Sensibo, another company, works to make home air conditioners more efficient. It’s a small disc you stick on any remote-controlled air conditioner or heater: As long as the unit is on automatic mode, it will heat your house before you wake up or cool it down before you get home from work. Like many smart home devices, a phone app controls it. Sensibo claims it can reduce air-conditioning energy usage by up to 40 percent.

Bird: Turn any surface into a touchscreen

Sick of being glued to your phone, tablet or computer? Check out Bird. It’s a wearable device — also somewhat sushi-like in appearance — that fits on the tip of your finger and turns any surface into a touchscreen — tables, walls, you name it. Made by the startup MUV Interactive, it lets wearers move objects and click on icons simply by touching. In the video, for example, a child plays a video game that is projected on the walls of a living room.

As most people age, hearing loss occurs — yet Alango Technologies says only 15 percent of those with hearing loss use hearing aids. Why? Because they are often complicated to use and aren’t particularly effective.

So Alango developed HearPhones, a hearing aid technology that can be adapted to a pair of headphones, a Bluetooth set or any other external device that people often wear on their ears. By merging hearing aids with everyday devices, Alango makes them easier to manage (from an app on your phone, natch). Bonus factors: HearPhones technology also allows the device to become a Bluetooth headset or slow down rapid speech to make it easier to understand.

Here’s the complete list of Israeli startups presenting at CES.