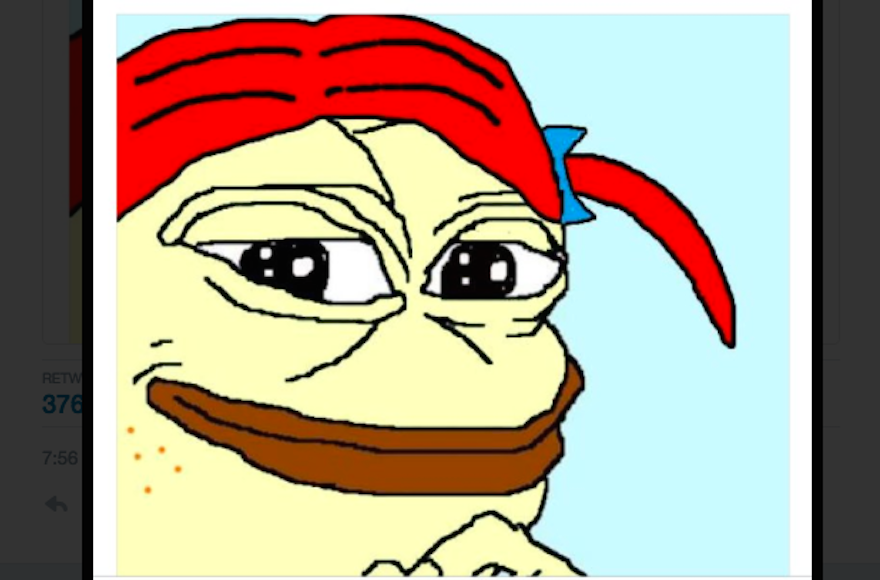 (JTA) — The Wendy’s fast-food chain is facing criticism, including a rebuke from a rabbis’ human rights group, for tweeting an image of Pepe the Frog, a cartoon character that has become a popular symbol for white supremacists.

The image was removed Wednesday from the company’s Twitter feed, less than a day after it was put up by the chain’s “community manager.” The frog cartoon was one of a series of memes from Wendy’s fans responding to a tweet that had criticized the chain.

“Our community manager was unaware of the recent evolution of the Pepe meme’s meaning and this tweet was promptly deleted,” read a tweet on the Wendy’s feed.

The image had been tweaked to resemble the chain’s mascot, a red-haired, pig-tailed girl named Wendy.

Pepe, a character created for an online comic in the mid-2000s, was later co-opted by followers of the “alt-right,” which advances an insular conservatism promoting white power. White nationalists attach Pepe illustrations to their Twitter handles or share doctored Pepe memes on anonymous internet message boards. The Anti-Defamation League has added Pepe to its database of hate symbols, and is working with its creator to reclaim its original anodyne image.

Our community manager was unaware of the recent evolution of the Pepe meme's meaning and this tweet was promptly deleted.

In an open letter to Wendy’s chairman of the board Nelson Peltz, a Jewish businessman and philanthropist, the director of programs for  T’ruah: The Rabbinic Call for Human Rights called the sharing of the meme “appalling.” It used the opportunity to slam Wendy’s for mistreating farm workers that harvest vegetables used in the chain’s products.

Rabbi Rachel Kahn-Troster also noted that Peltz is chairman of the board of governors of the Simon Wiesenthal Center. In that position, she wrote, “you must surely be frightened by the tremendous rise in anti-Semitic incidents throughout the country. The same neo-Nazis who declared Wendy’s their new official hamburger have desecrated synagogues with swastikas, engaged in vicious online attacks on vulnerable populations, and harassed Jewish journalists in their homes.”

“Today, I ask you to be a leader, not a bystander,” she added. “When Wendy’s has been declared the official burger of hatred, you must take a stand to make Wendy’s the burger of human rights.”