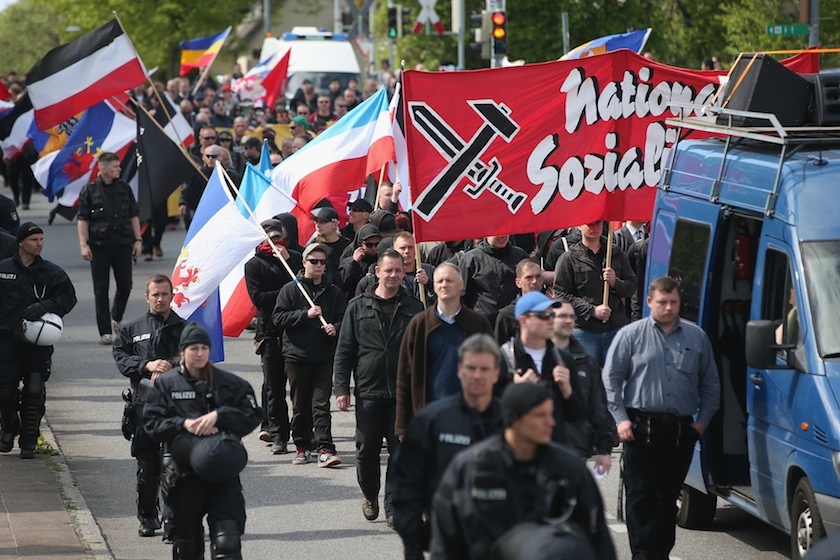 Some 250 supporters of the far-right National Democratic Party marched, accompanied by riot police, on May Day in Rostock, Germany, on May 1, 2014. (Sean Gallup/Getty Images)
Advertisement

The long-awaited decision announced Tuesday was met with disappointment from Jewish leaders in Germany and abroad. It marks the second time that the Federal Constitutional Court in Karlsruhe has considered barring the NPD, which is anti-foreigner and anti-European Union, and belittles the Holocaust.

A 2003 attempt failed after the Supreme Court learned that government informants themselves instigated some of the allegedly unconstitutional activities.

This time, too, the question was whether the party, which has an estimated 7,000 members nationwide, poses a real threat to German democracy. The court found that it does not, even the party wishes it could.

Lamenting the decision, World Jewish Congress President Ronald Lauder said the verdict “allows the NPD to pursue its destructive, anti-democratic activities and to spread more anti-Semitic and racist hatred. This sends the wrong signal, all the more so as the court made it very clear that the NPD indeed strives to overthrow the democratic order and shares many of the aims of Hitler’s Nazi party.”

Charlotte Knobloch, head of the Jewish communities of Munich and Bavaria, said she respected the decision but “I deeply regret it.”

Knobloch, who also is the World Jewish Congress commissioner for Holocaust memory, said she could understand the legal argument that there are “no concrete threats.” But a ban would have been important “primarily due to German history, and also given the background of increased right-wing populism and right-wing extremism today.”

The latest hearings began last year, after the German states joined to make the request. It is extremely difficult to ban a party in Germany because of post-Nazi era laws designed to safeguard free speech.

The court found that while the NPD’s attitude was inhumane, racist and similar in orientation to National Socialism, it did not have the potential to overturn German democracy.

Though the NPD has never made it into the German federal parliament, in 2014 one of the party’s most notorious members, Udo Voigt, was elected to the European Parliament, which has a lower vote threshold for winning seats.

NPD representatives have been elected into two state parliaments in the past decade by barely passing the 5 percent vote minimum in Germany. Election success earns the party federal taxpayer money.

The court said it would be possible for lawmakers to amend legislation in order to withhold such funds from the party.

Josef Schuster, head of the Central Council of Jews in Germany, called the verdict “disappointing.”

“For the Jewish population and other minorities, as well as everyone who does not fit into the worldview of this party, a ban would have been very important and encouraging,” he said in a statement. “It also would have given a boost to all those civil society activists who have been opposing the NPD for years.

“We can only hope that the judges are right” in their opinion that the NPD doesn’t have a chance of becoming more politically successful and powerful, he added.

Schuster also urged those in government, both federal and state, to use all the legal tools at their disposal to have public funds withdrawn from the party.

He said the court’s statement was not a success for the NPD, since the court laid bare the party’s true face, including its anti-Semitic attitudes.

Lauder warned that it did not take long for Hitler’s Nazi party to achieve its aims.

“The situation today may be different, but there is absolutely no reason to be complacent,” he said. “Germany must continue to combat the neo-Nazi movement vigorously.”