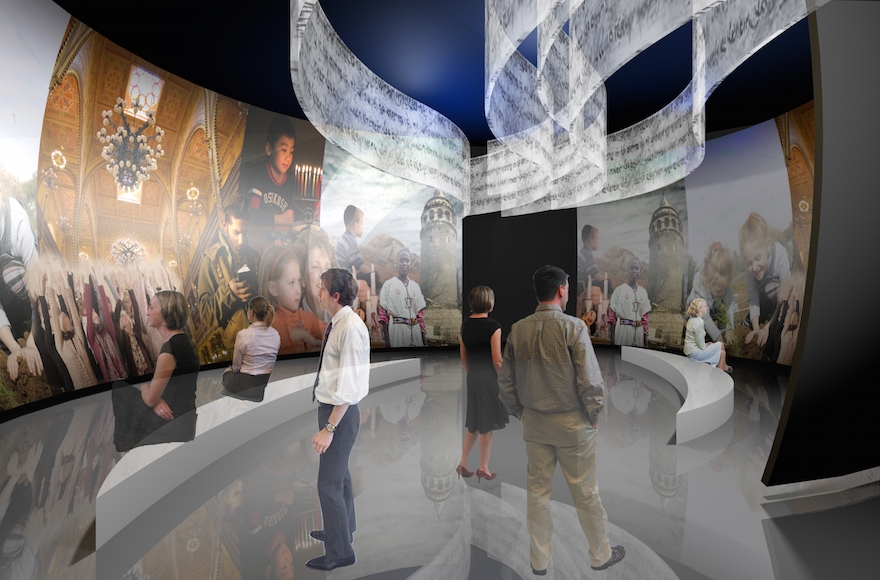 Rendering of the new core exhibition at the Museum of the Jewish People at Beit Hatfutsot. (Courtesy of Gallagher & Associates)
Advertisement

(JTA) — The San Francisco-based Koret Foundation has given the Museum of the Jewish People at Beit Hatfutsot in Tel Aviv a $10 million grant — the largest from a U.S. philanthropic foundation in the museum’s 40-year history.

The grant will establish the Koret International School for Jewish Peoplehood, the museum said in a statement. The school will expand the work of Beit Hatfutsot’s International School for Jewish Peoplehood Studies and offer individually tailored personal and professional educational programs for visitors, online users, students, educators and community leaders, according to the museum.

In addition to programs taking place at the museum, they will be offered through learning curricula for Jewish day schools and community centers, traveling exhibits, and professional training and certification programs for educators from around the world.

“The Koret Foundation’s grant reflects an exciting and growing convergence of interests around the revised mission for the Museum of the Jewish People, bringing leading foundations into conversation and partnership with our ongoing and much-valued partner, the Government of Israel,” said Irina Nevzlin, chair of the board of directors at Beit Hatfutsot. “With the visionary support of the Koret Foundation, The Museum of the Jewish People will be the unquestioned global hub for a new conversation about what it means to be not just Jewish, but a member of the Jewish people.”

Jeffrey Farber, CEO of the Koret Foundation, said the Museum of the Jewish People “is deeply committed to educating Jews and the broader community about the diversity of modern Jewish life, Israel as a Jewish homeland, and the importance of sustaining a vibrant Jewish community for the future. Given current world events, this mission could not be more important.”

The Koret International School is part of the overhaul of the Museum of the Jewish People, which will introduce a new core exhibit in 2019. The  project, which includes four new galleries opened in 2016, has been made possible through a $100 million fundraising campaign.

Other major supporters of the museum include the Nadav Foundation, Ambassador Alfred H. Moses and Family, and The Milton and Tamar Maltz Family Foundation.