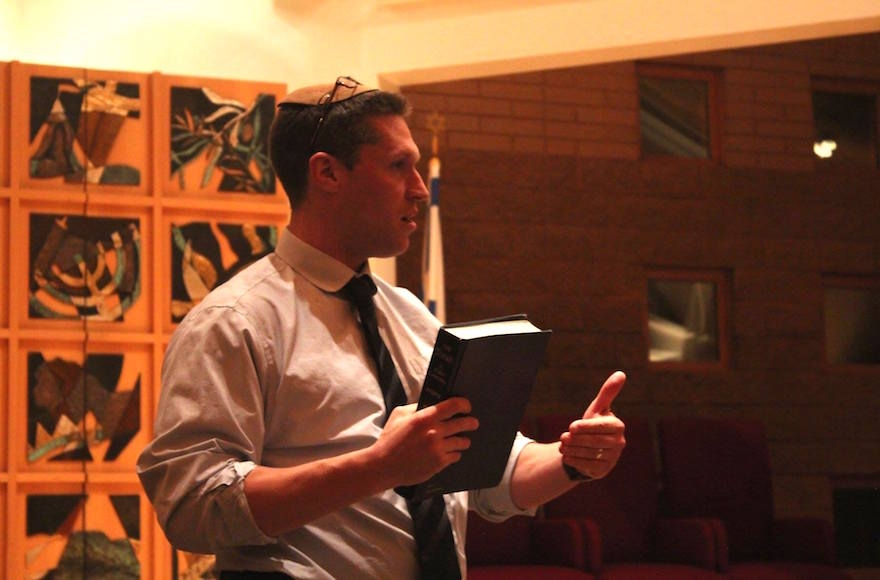 (JTA) — Jews have been praying for the welfare of the governments they live under for hundreds of years.

But what happens when they lose faith in the individuals elected to lead those countries?

That’s the dilemma faced by Rabbi Shmuly Yanklowitz, an Orthodox rabbi who is president and dean of Valley Beit Midrash in Phoenix and founder and president of Uri L’Tzedek, an Orthodox social justice organization. Saying he “cannot pray for the success of this President,” Yanklowitz has written a new text that, without naming President-elect Donald Trump, prays to “Guide the incoming leader of this country away from his basest instincts, thwart his plans to target certain groups and strengthen white supremacy.”

The idea of a Jewish prayer for a successful government harks all the way back to the prophet Jeremiah, who advised the Jews who were taken by the Babylonians: “Seek the welfare of the city to which I have exiled you and pray to the Lord in its behalf; for in its prosperity you shall prosper” (Jer. 29:7). The first official Jewish prayer for the welfare of the state and its governing officials was introduced in prayer books in the 14th century.

The prayer currently found in most Orthodox prayer books calls on God to:

bless The President, the Vice President, and all the Constituted Officers of Government of this Land. The King who reigns over Kings in his mercy may he protect them from every trouble, woe, and injury, may he rescue them and put into their hearts and into the hearts of all their councilors compassion to do good with us and with all Israel, our brethren.

The Conservative prayer book, Sim Shalom, includes a prayer for the government that includes a request for “blessings for our country — for its government, for its leaders and advisers, and for all who exercise just and rightful authority.” Mishkan T’filah, a Reform siddur, includes a Prayer for Our Country that reads, in part: “Grant our leaders wisdom and forbearance. May they govern with justice and compassion.”

The Jewish Virtual Library points out that over the centuries Jews have adopted different prayers for the governments of the countries in which they have lived in over the centuries, and clearly the prayers have been adapted to suit the situation of the Jews in these countries. (The Broadway musical “Fiddler on the Roof” pokes fun at this tradition when the townspeople of Anatevka ask the rabbi for a prayer for the Czar. “May God bless and keep the Czar …  far away from us!” he responds.)

“How people pray for their government reveals much about what they think of their government,” Brandeis University historian Jonathan Sarna writes in a chapter included in a 2005 book on synagogue liturgy. “Changes over time in these prayers shed light on religion and politics alike.”

The wording of the prayer for government and the frequency of its use changed after America declared its independence, during the Civil War and during the Vietnam war era.

Nathan E. Weisberg, writing earlier this month on the Orthodox Union website, recognized that some may be uncomfortable praying for the welfare of a president with whom they deeply disagree. Nevertheless, he wrote, “It is not for us to judge whether or not a leader is worthy of our prayers (although it is for us to judge whether or not they are worthy of our vote) — and, indeed, if we feel they are unworthy, then it is for us to pray all the harder.”

Yanklowitz presented his new prayer earlier this week in a Facebook post. “I felt that it was not enough to simply avoid the U.S. President in the prayer for the government but to remind myself of the billions of vulnerable people who are at risk under his rule, and challenge myself each Shabbat to build up the strength for another week of spiritual resistance,” he wrote.

His prayer reads in part:

May agents of hate who stray from Your holy vision of love and justice, found within and outside our country, be averted. May all of Your creations be handled mercifully. May all to whom You have given the sanctity of life awaken and fulfill their calling to bring love, justice, and kindness to all corners of Your world.

Yanklowitz‘s new prayer struck some readers (including this one) as shockingly personal and out of bounds, no matter who he or I voted for in the presidential election.

“As a big fan of you I strongly disagree with you,” one of his Facebook friends commented. “As a true liberal who walks the walk and [spends] my life building bridges you are totally wrong. Prayers are said to wish the president divine guidance and success. Any objection to prayers are un-American and childish.”

Rabbi Shmuley Boteach, the founder of This World: The Values Network who ran unsuccessfully for Congress as a Republican in 2012, also was no fan of Yanklowitz’s prayer, tweeting, “A rabbi rewriting a prayer to attack the POTUS? There is no room for politics in religion, only values.”

Those commenting on the right-wing Arutz Sheva news website, which ran an item on the rabbi’s prayer, were even more verklempt. But Yanklowitz is undaunted. “While these raging, infantile messages don’t bother me, I fear that others who are vulnerable will be badly bullied (and G-d forbid physically harmed) for raising their voices of faith & conscience,” he responded on Facebook. “Friends, stay strong!”