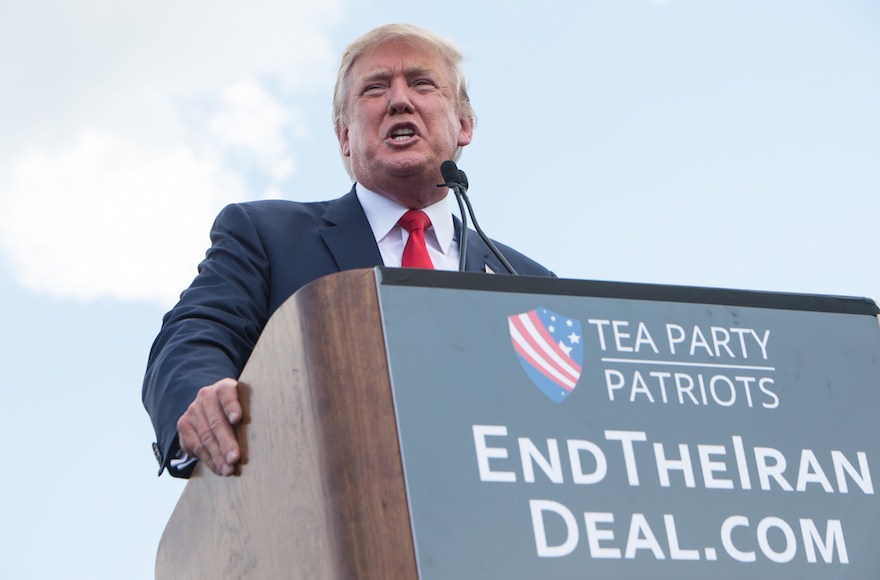 Donald Trump speaking at a rally organized by the Tea Party Patriots against the Iran nuclear deal in front of the Capitol in Washington, D.C., Sept. 9, 2015. (Nicholas Kamm/AFP/Getty Images)
Advertisement

(JTA) — Donald Trump has been quick to bash the Iran nuclear deal, but slow to commit to doing anything about it.

This week he doubled down on his assessment of the agreement, which imposes limits on Iran’s nuclear program in return for relief from sanctions, as “one of the worst deals ever made.”

But the self-described dealmaker — who once told a room full of Republican Jews, “I’m a negotiator like you folks” — refused to say whether he would make any changes to the pact. 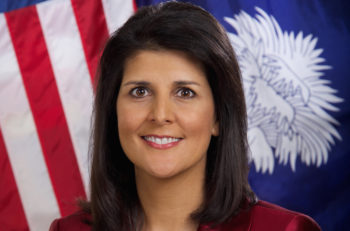 This clashes with some of his earlier claims during his campaign that he would dismantle or renegotiate the Joint Comprehensive Plan of Action on Iran, or JCPOA, which was reached in 2015 among Iran, the United States, China, Russia, Britain, France and Germany.

However, recent statements by some Trump nominees and the president’s decision to ask a top Obama official who helped craft the deal to temporarily run the Treasury Department may signal that he won’t be making changes to the deal anytime  soon.

Since the middle of last week, three of Trump’s top picks — Nikki Haley, his choice for U.S. envoy to the United Nations; James Mattis, his intended secretary of defense; and Rex Tillerson, his nominee for secretary of state — all either stated their opposition to canceling the agreement or seemed to suggest alternative actions.

On Wednesday, Haley said that reviewing the details of the nuclear agreement was “more beneficial” than unilaterally abandoning it. 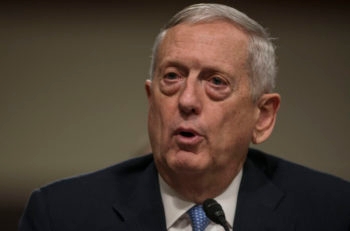 “I think what would be more beneficial at this point is that we look at all the details of the Iran deal, we see if they [the Iranians] are actually in compliance — if we find that there are violations that we act on those violations,” Haley told the Senate at her confirmation hearing, according to Reuters.

Mattis seemed to rule out scrapping the deal, saying that the U.S. would not take back a treaty it had signed.

“I think it is an imperfect arms control agreement — it’s not a friendship treaty. But when America gives her word, we have to live up to it and work with our allies,” he told the Senate at his confirmation hearing last week.

Tillerson did not come down as hard on the nuclear deal, and he did not call for killing it. Instead he urged at his Senate hearing for a “full review” of the JCPOA and stronger compliance from Iran.

These statements — all from officials who if confirmed would be involved in high-level diplomacy — indicate a reluctance, if not complete opposition, to revisiting the Iran nuclear deal. 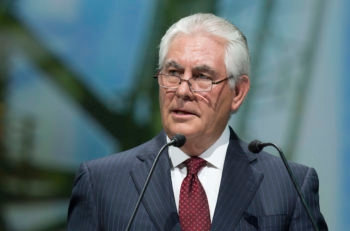 Rex Tillerson, CEO of Exxon Mobil, speaking in Paris, June 2, 2015. Tillerson is the nominee for secretary of state. (Christophe Morin/Bloomberg via Getty Images)

In addition, Trump has asked Adam Szubin, acting undersecretary for terrorism and financial intelligence at the Treasury Department, to run the agency until a replacement is confirmed, incoming press secretary Sean Spicer said Thursday.

That decision in itself may not have raised eyebrows — George W. Bush’s appointee, Stuart Levey, stayed in the role until 2011 at Obama’s request — were it not for Szubin’s role in crafting and championing the Iran deal.

“The JCPOA represents a tremendous diplomatic breakthrough – a peaceful means of effectively cutting off all of Iran’s potential pathways to a nuclear weapon,” Szubin said last year at the annual forum for the Foundation for Defense of Democracies.

The deal, he added,  “is the most powerful example we’ve got of how a persistent and broad-based sanctions effort, coupled with serious diplomacy, can succeed.”

Szubin’s view aligns with that of former President Barack Obama, who said he considers the deal one of his signature foreign policy successes, but not with that of Israeli Prime Minister Benjamin Netanyahu, who said the deal “paves the way for Iran getting nuclear weapons” when some of its restrictions lapse in 10-15 years. In December, Netanyahu said he looks forward to speaking with Trump “about what to do about this bad deal.” 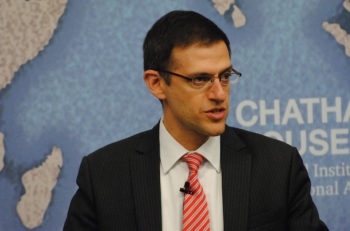 Last March, Trump told the American Israel Public Affairs Committee, which lobbied hard against the pact, “My No. 1 priority is to dismantle the disastrous deal with Iran.”

But Netanyahu and other opponents of the deal may be left disappointed — assuming, that is, that they think no deal is better than the one in place right now. Trump’s decision to keep Szubin, even in a temporary capacity, and the recent statements by Haley, Mattis and Tillerson mean that at the very least the president will be surrounded by several voices opposed or hesitant to scrapping the Iran deal.