10 stunning Israeli artworks that can be worn as shoes 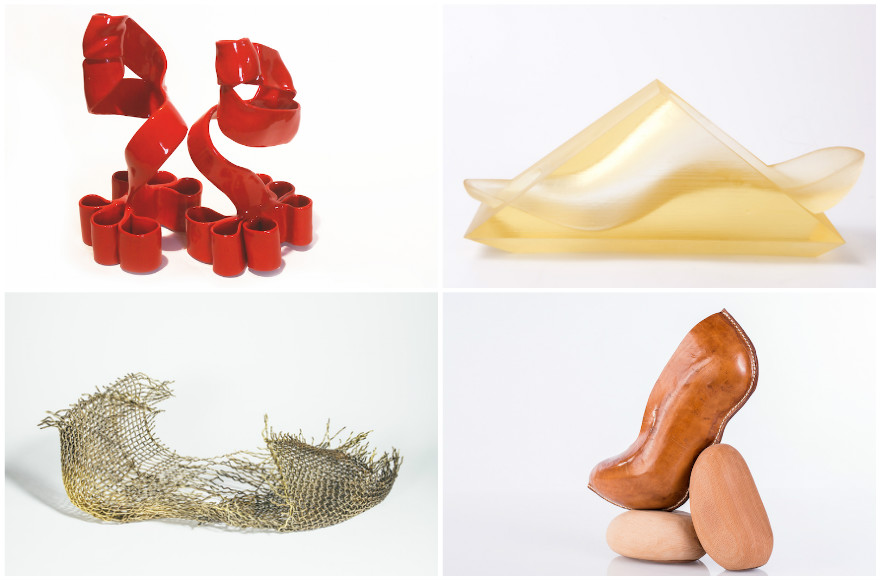 Shoes by Israeli art students from the exhibition "A Walk of Art: Visionary Shoes"
Advertisement

Israel is known for its innovation in medical research, defense technology and startup companies — but a new exhibition shows that the country’s creative spirit also extends to shoes.

“A Walk of Art: Visionary Shoes,” which runs Jan. 24-Feb. 13 at the Parasol Projects Gallery in New York, features more than 60 unique shoe designs, some of which look more like sculptures than footwear. All the artists are current or former students of Jerusalem’s Bezalel Academy of Art and Design, which is putting on the exhibition.

“Shoes are objects that have an almost mystical ability to instantly rivet us,” curator Yaara Keydar said in a statement. The exhibition “is an exploration of the charged history, iconic shapes and mystery that so often surrounds shoes.”

Here are some of the most creative designs on show. 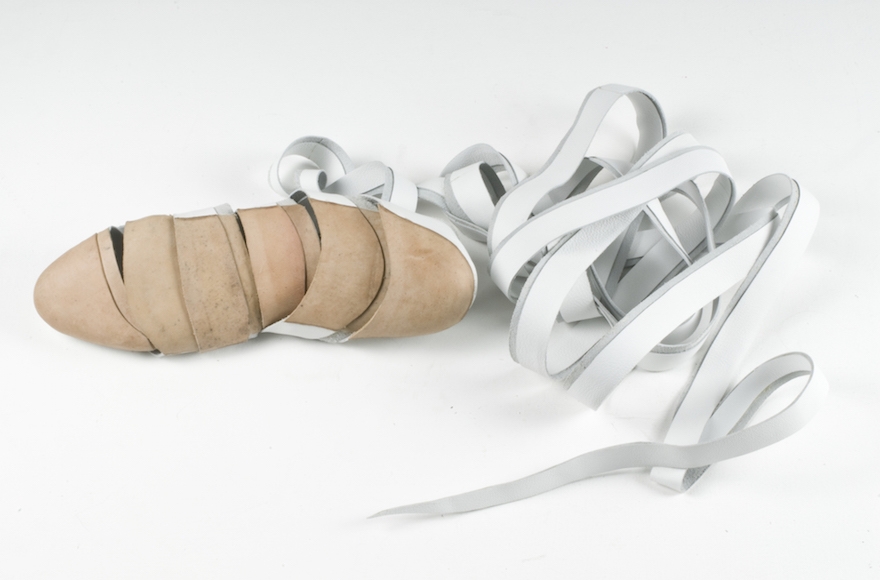 This shoe was inspired by similarities between Jewish wedding and funeral attire, and its shape — which is only seen when laced around the wearer’s foot and leg — was meant to blur the line between “eternity and transience.” 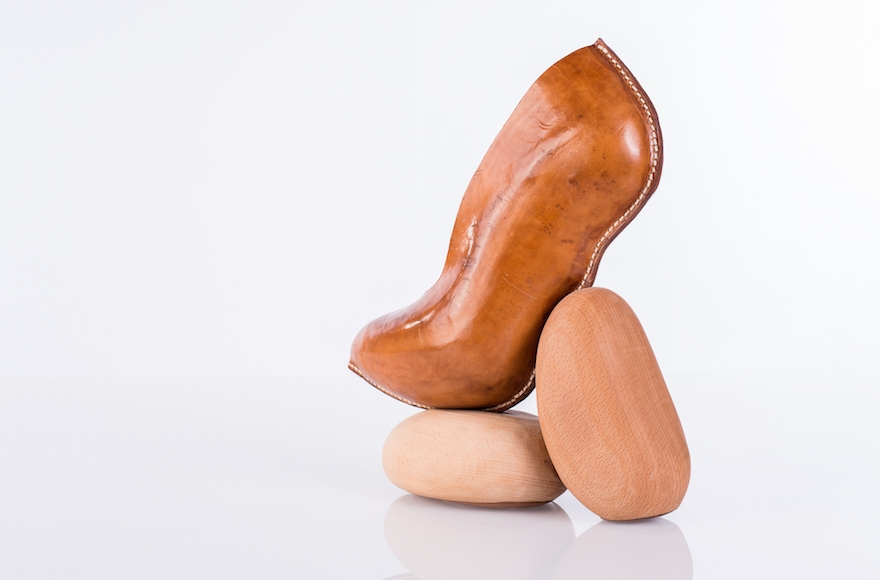 This piece, made out of leather and boxwood, depicts a foot touching soil. The base of the shoe brings to mind the Jewish custom of leaving pebbles on grave stones. 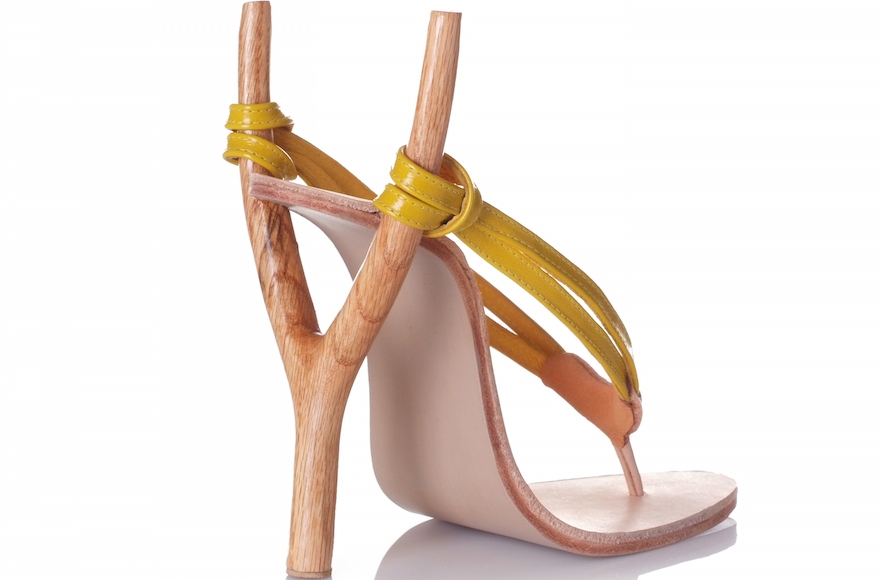 Inspired by the sound flip-flop sandals make, this shoe was an attempt by Levi — who has designed shoes for pop royal Lady Gaga — to capture the moment when the sandal straps are stretched, right before the bottom of the shoe bounces back and slaps the foot. 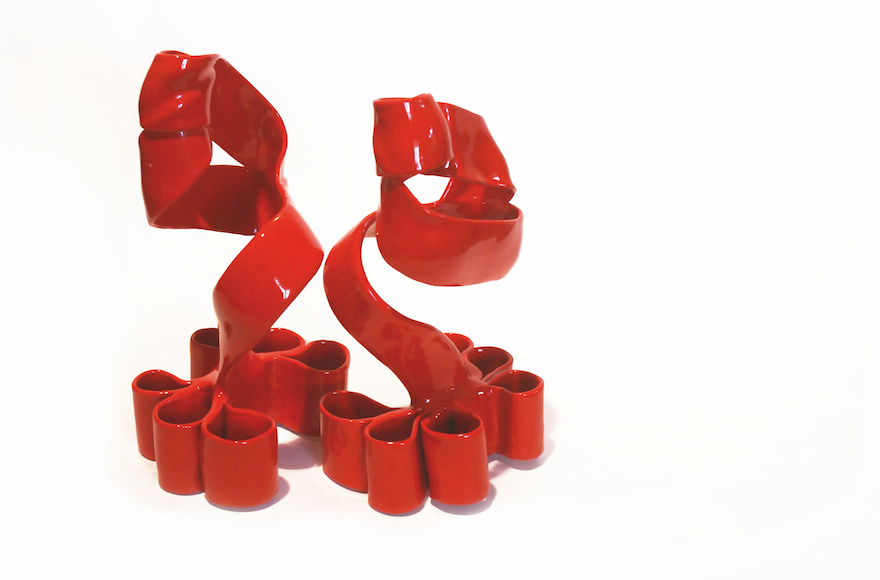 Baehr designed these shoes as a parody of the notion that a wife on her wedding night is a present to the groom, wrapped up and ready to be untied. 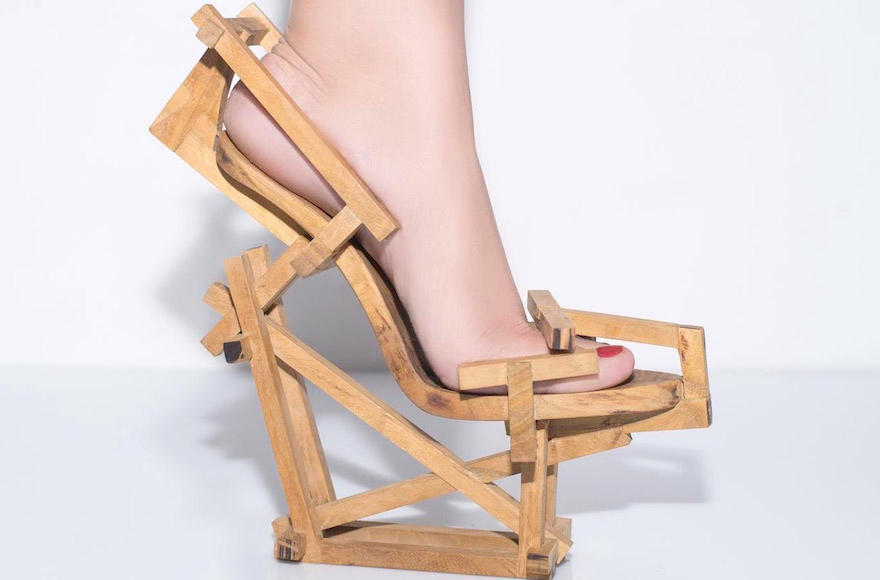 Souva’s inspiration came from the board game Jenga, in which players take turns removing blocks from a tower. “The parts that support the bottom of the foot are designed, on their one side, to fit the foot’s amorphousness, and on the other provide an interface with the orthogonal parts,” she said. 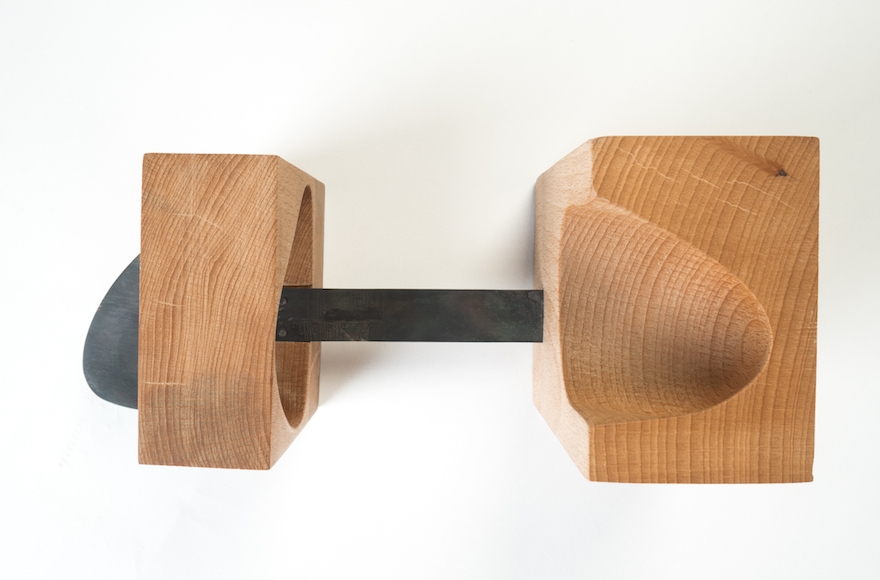 This design was inspired by the German Bauhaus movement, which used simple, geometric designs to unify art and technology. The wearer’s foot is meant to go in the middle of the shoe, filling the empty space. 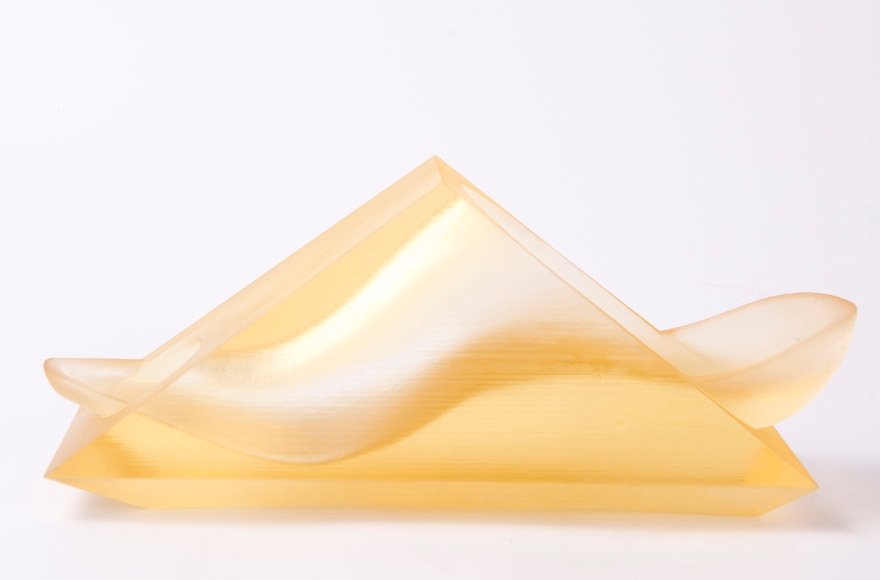 Soreq’s shoe, which she made using a 3-D printer, was inspired by psychedelic art of the 20th century and Pink Floyd’s iconic “Dark Side of the Moon” album. This shoe is a play on McQueen’s iconic armadillo shoe, which was inspired by the form the animal takes to protect itself from threats. Rubin’s design captures the moment after danger has subsided, when the armadillo has to decide whether to emerge from its protective position. 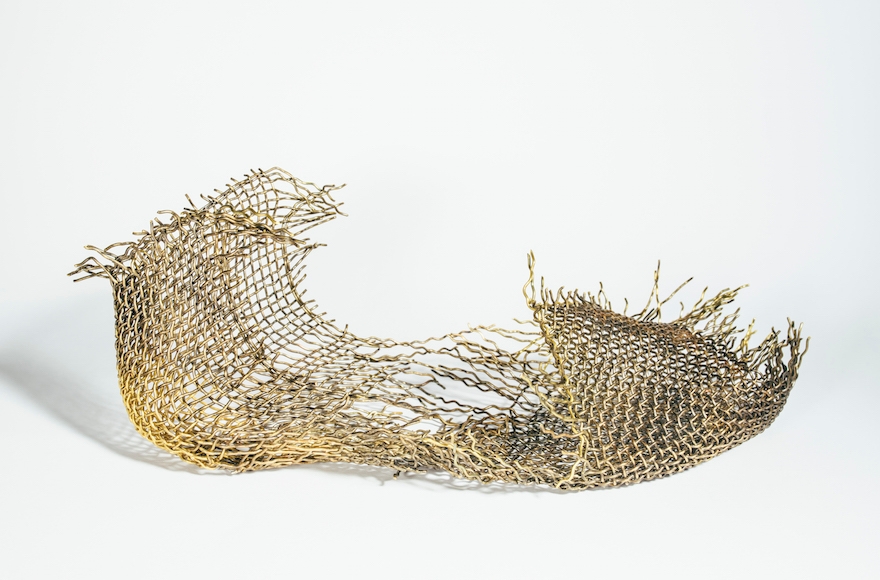 The shoe, made entirely from handwoven brass thread, expresses the tension between the brass net’s strict form and the way it has to adapt to fit the foot’s amorphous shape. 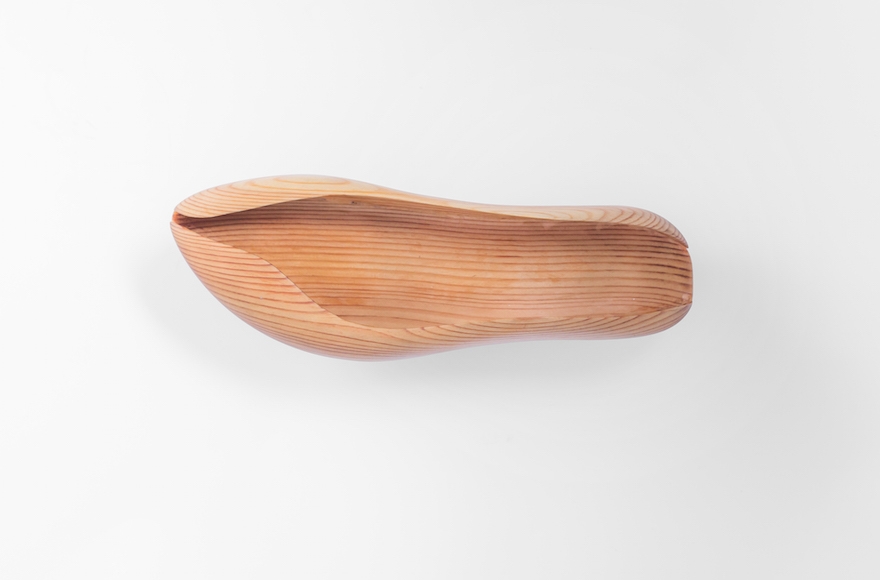 Biri was inspired by the late 19th-century Arts and Crafts movement’s emphasis on using natural materials. The shoe is made of pine wood and meant to mimic the flow of waves. 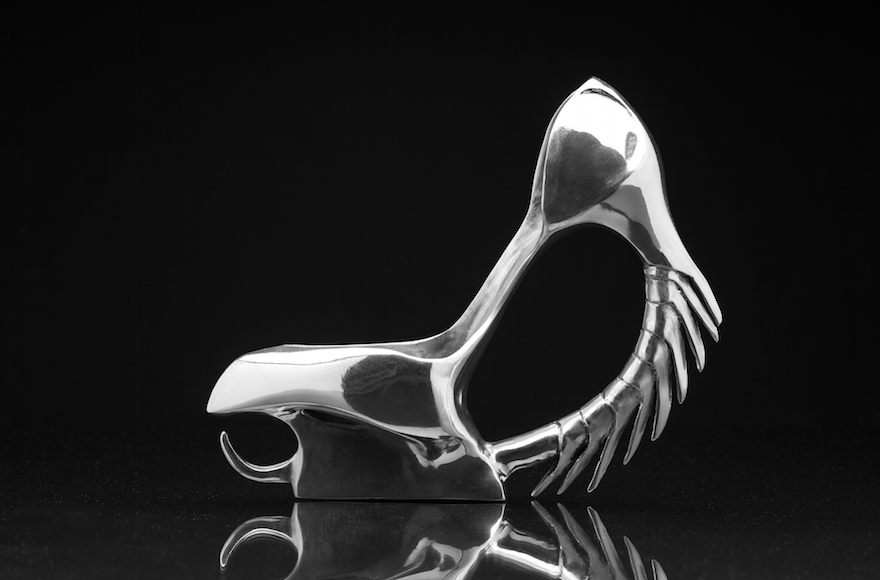 Tzidon crafted this shoe entirely out of aluminum and drew inspiration from motifs found in ancient weapons, such as the armor used by knights in the Middle Ages.