All the Jewish stuff happening around the Women’s March 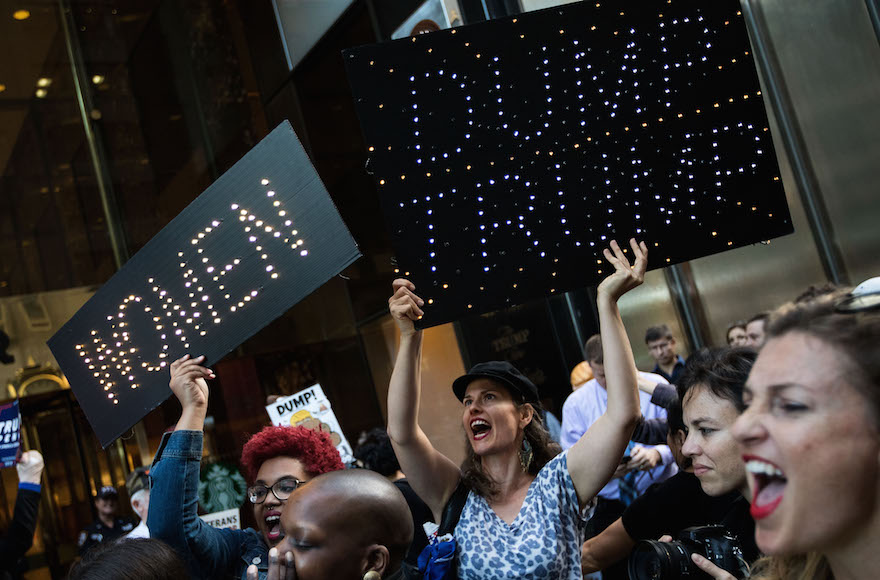 For Shabbat-observant Jews, that sounds like just another Saturday itinerary. But tomorrow, Jews and non-Jews of all religious stripes will be doing those things as part of the Women’s March on Washington.

The event, planned as a response to the inauguration of Donald Trump as president, will gather hundreds of thousands of people to march through the capital for progressive causes. Thousands of Jews have pledged to join in, and Jewish groups — from synagogues to activist organizations — have planned a Sabbath of programming around the demonstration.

Here’s a rundown of the Jewish events happening before, after and around the Women’s march:

The march does not begin until Saturday morning, but Sixth and I, a nondenominational synagogue hosting the bulk of Jewish Women’s March activities, will begin its programming the night before. The synagogue is hosting services with a range of activists groups, including the National Council for Jewish Women, Jews United for Justice, the rabbinical human rights group T’ruah and others. The synagogue will also be holding a dinner, which has been sold out.

Other synagogues in D.C. — including the Conservative Adas Israel and the Orthodox Kesher Israel and Chabad — will also be offering dinner to out-of-towners who have come in for either the day’s inauguration or the march (or, in rare cases, possibly both).

Before the march, at least two large groups of Jews will be coming together to pray and prepare. Sixth and I will be hosting a gathering of song, reflection and Torah reading at 8:45, and will be heading to the march at 9:30. (The pre-march event is also sold out.)

In addition, the Religious Action Center, the Reform movement’s legislative advocacy arm, will hold a Sabbath service at the Hyatt Regency Washington led by local Reform rabbis. Called “Nosh, Pray, March,” the RAC program will begin at 8:45 with the prayer service featuring folk songs and readings about social justice. When it’s over, marchers will gather at 9:45 at the corner of 3rd and D streets.

Going to the march and can’t decide which contingent to join? Not to worry — the groups from the RAC and Sixth and I will be meeting up before joining the throngs.

During and after the march:

Both Sixth and I and the RAC will be hosting continuing programming Saturday afternoon. The RAC will set up shop at the Hyatt from 10:30 a.m. to 3:45 p.m., greeting marchers with coffee, tea and information about the RAC’s work. After the march, Sixth and I will offer (sold-out) lunch, meditation, yoga and lectures on women’s rights and social justice.

Chabad will also be serving Shabbat lunch for those who are in town for the inauguration and the march.