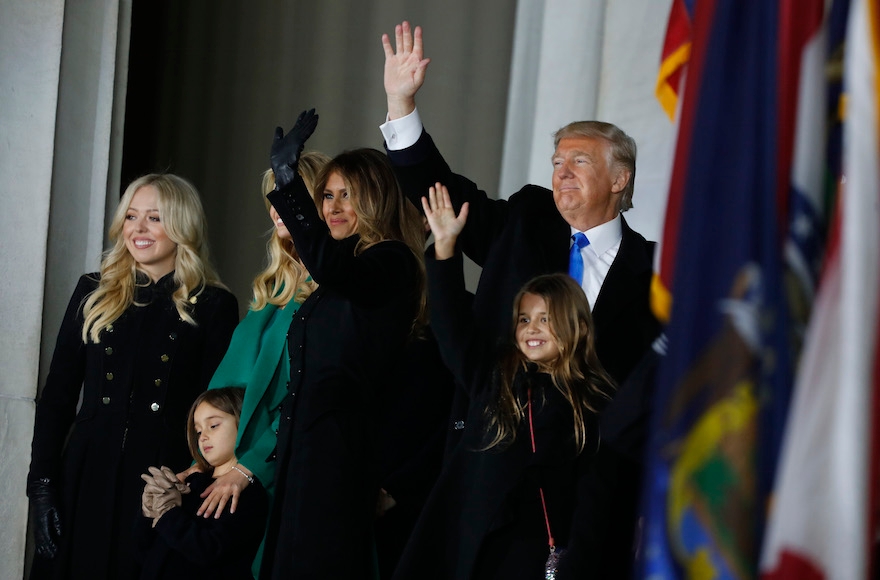 Donald Trump and family at the end of the inauguration concert at the Lincoln Memorial in Washington, D.C., Jan. 19, 2017. (Aaron P. Bernstein/Getty Images)
Advertisement

“Congrats to my friend President Trump,” Netanyahu wrote Friday on Twitter, several hours before the president-elect was scheduled to officially assume the title following his inauguration in Washington, D.C. “Look forward to working closely with you to make the alliance between Israel and the United States of America stronger than ever.”

Netanyahu and President Barack Obama have had a tense relationship amid Netanyahu’s vocal opposition to a U.S.-led deal between six world powers and Iran that offers Tehran sanctions relief in exchange for scaling back some of its nuclear capabilities. Obama has also criticized Israel’s activity in settlements and in the West Bank and eastern Jerusalem more openly than some previous presidents.

On Dec. 25, after the United states abstained during a U.N. Security Council vote that ended with a condemnation of Israel’s settlements activity, Netanyahu said in a speech that he had told Secretary of State John Kerry that “friends don’t take friends to the Security Council.”

Yuval Steinitz, a senior Israeli Cabinet minister, said Thursday that Israel was “praying” that Trump will be responsible, courageous and serious.

Steinitz, Israel’s energy and infrastructures minister, who is considered to be a close ally of Netanyahu, said in an interview Friday on Army Radio that “we are all praying that, alongside his sense of humor and colorful personality, Trump will understand the weight of responsibility lying on his shoulders and will turn out to be a courageous and serious president.”

Steinitz added:  “I very much hope and believe that he will move the U.S. Embassy in Israel to Jerusalem.”

Congress recognized Jerusalem as Israel’s capital in 1995 and mandated the move to Jerusalem, but successive U.S. presidents have exercised a waiver in the law that allows them to delay the move for national security reasons. U.S. security and diplomatic officials say that moving the embassy would stir anti-American violence in the Middle East and elsewhere.

During the presidential campaign, Trump said he supported moving the embassy to Jerusalem, and has reiterated the promise in recent days.

Steinitz said doing so would encourage other countries to follow suit.

“It’s absurd that the embassies are in Tel Aviv and the United States should be the first to move it to Jerusalem,” Steinitz said.

Israel’s education minister, Naftali Bennett of the rightist Jewish Home party, was quoted by Army Radio as having congratulated Trump ahead of his inauguration.

“President Trump, in the name of the people in Israel, congratulations and good luck!” Bennett was quoted as saying. “We look forward to a deep and strong relationship. May God bless our nations.”